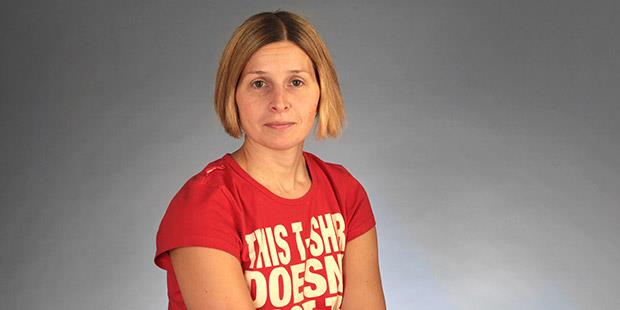 Dr. Nela Milic is an artist and an academic working in media and arts and Senior Lecturer and Year 2 Contextual and Theoretical Studies Coordinator in the Design School at London College of Communication.
Throughout her career, Nela has delivered creative projects for organisations including the Royal Opera House, Barbican, Arts Council England, John Lewis, Al Jazeera, Campbell Works, Oxo Tower, LIFT, and London Film Festival.
Nela is interested in the intersection of time and space, which has brought her to many multi-media and mapping projects where she’s dealt with memory, narrative, digital archives, city and participation. Between 2003 and 2006, Nela ran Refugees and the Arts Initiative – a British national organisation for the ‘refugee arts’. She is a recipient of the European Cultural Foundation Artistic Grant for the project Wedding Bellas and her work has been displayed at the Olympic stadium in London.
Nela developed the project ‘Balkanising Taxonomy’ for her PhD where she researched the city as a site of spectacle and the culture of protest. She continues working on art and public space in Belgrade through Kulturklammer, centre for cultural interactions. She won Southwark community arts award for her project Here Comes Everybody in 2015, which she wrote about in the book Art and the City: Worlding the Discussion through a Critical Artscape (2017).
She conducted research for Gulbenkian Foundation about participatory art, Greater London Authority about creative responses to COVID-19 and worked on the project TimeCase: Memory in Action with a Grundtvig grant. She has been funded by Association of Art Historians and British Society of Aesthetics for research projects about the sculptor Olga Jevric and inauguration of Postsocialist research platform at UAL. She is na Associate of TrAIN research centre.
She is a reviewer of UCL Press, Palgrave MacMillan, the Journal for Art, Design & Communication in Higher Education, Memory Studies Journal, Studia Politica and Feminist Review. She is a co-chair of Art and Memory Working Group of Memory Studies Association (MSA). She evaluates EU COST network applications in humanities and is a consultant for the Science Fund of Republic of Serbia. Nela is part of the AHRC funded Arts and Reconciliation research project for which she has created an installation Text Illuminations. She is a member of Space and Place and Design Activism research hubs. Nela is co-editor of a Special Issue of the Journal of Organisational Aesthetics about London Design Festival at LCC.
Nela is a Senior Fellow of Higher Education Academy. She is part of PhD supervisory teams (doctoral students: Vera Zurburgg, Mireia Ludevid Llop, Ewelina Warner and Miriam Sorrentino). She has acted as an external examiner at UNSW, Sydney and UPV/EHU.