Why I did my BA and MA at LCF – Carl Bro and Michele Hartman, MA Footwear

LCF News recently caught up with MA16 Footwear graduates Carl Bro and Michele Hartman who completed both the BA (Hons) Cordwainers Footwear: Product Design and Innovation and the MA Fashion Footwear courses at LCF. They told us about the reasons they chose to study here, the differences between the BA and MA course, what their final collections focus on, as well as their plans for the future. 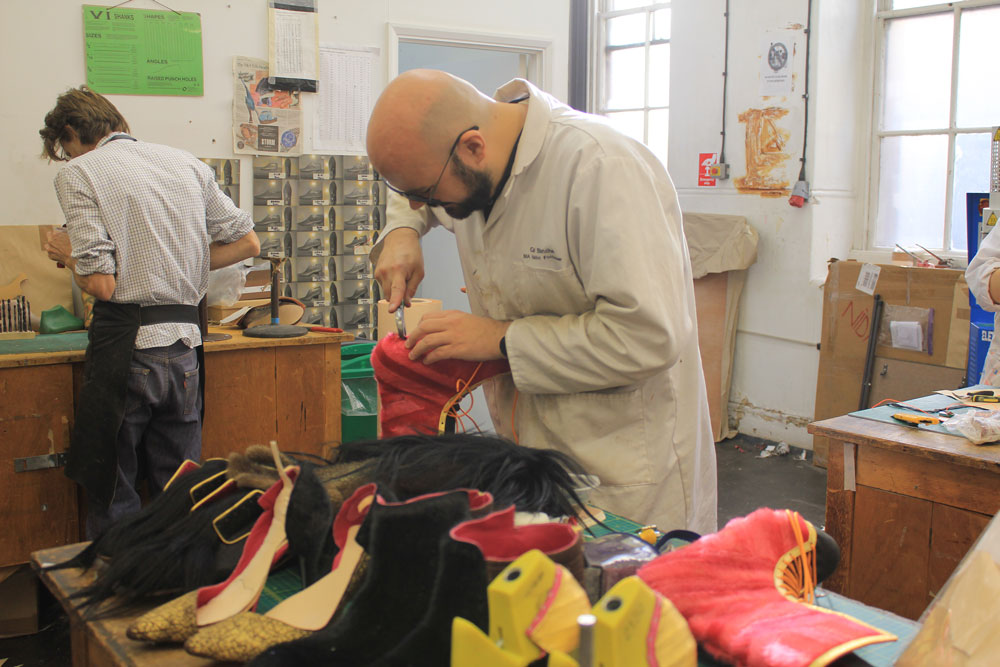 Why did you choose to study Footwear at LCF?

Carl: I chose LCF because of the connection with Cordwainers and the heritage of the school. You can’t study footwear where I’m from in Denmark, and I can’t speak Italian so I couldn’t go to Italy. This is the only place I wanted to study – I liked the craft element in the courses here and a lot of the other schools in the UK don’t really have that – they focus more on design whereas here, there’s a craft element. I came from a shoe making background so this was important for me.

Michele: I’ve been living in London for over 14 years and since I arrived, I always wanted to study at London College of Fashion. I did a foundation course first, paying as an international student but once I got my European citizenship, I started my BA and then came onto the MA – I always wanted to be at LCF one way or another.

Did your BA influence your decision to stay here and do an MA?

Michele: I applied for a Fashion Matters scholarship before my MA which I got, so for me there was no doubt that I would stay on at LCF.

Carl: One of the reasons I stayed at LCF for my MA too is because when you do footwear in London you only really have the choice of going to LCF or the Royal College of Art and there you don’t just do footwear, you go into either menswear or womenswear, and then specialize in footwear. I didn’t want to commit to one gender, I wanted to do both. I just wanted to study footwear in general – that’s what I do, I’m a shoemaker. 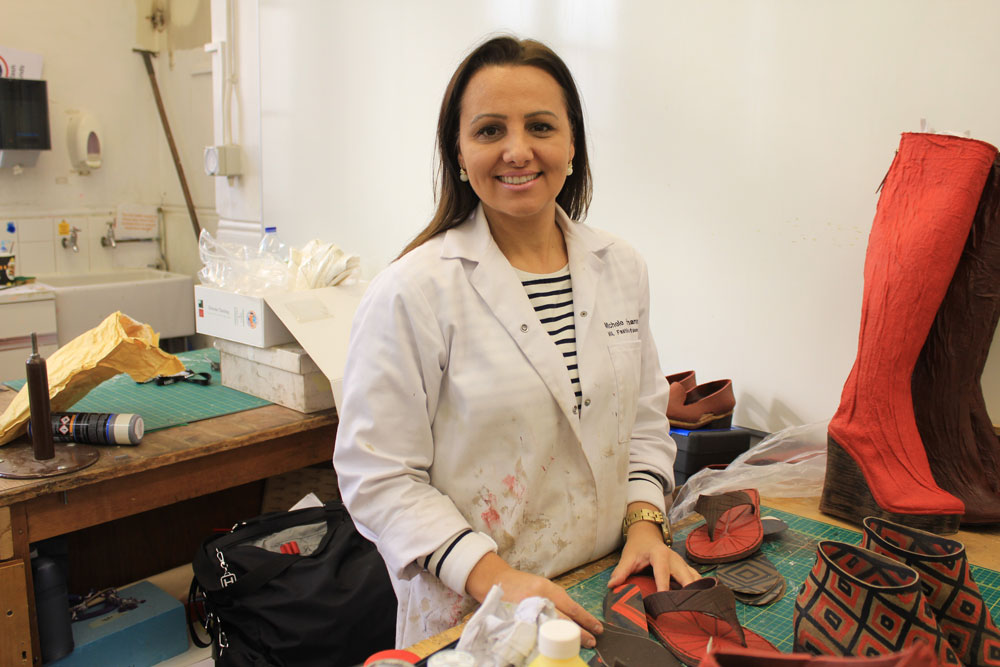 Carl: Yes, it’s similar to the BA but more of everything. It’s the same way of studying but more making and more research crammed into less time.

Michele: I think research is the main difference because you want to bring something more unique and different to the table, and present shoes that are well made.

What’s your final collection about?

Michele: I always wanted to do something sustainable since I started, especially as sustainability has become such a big issue. I started concentrating on the Amazon rainforest and discovered how the process of latex and natural rubber has evolved, from the 1920s to today. I looked at the great ways the people living there use the material. I came across an organisation via the Collaborative Unit and I told them I was interested in working with the material, and asked if they could provide more information and if I could go there to see if I could apply the material to shoes and bags so they welcomed me very warmly. I created a range of shoes and bags for the collaborative unit which they really liked. We’re now launching in Brazil next spring and the work for my Masters is an extension of this project.

Carl: My final project is about materials and what people think about the origin of materials. I’m using a lot of fur – it’s a pro fur project to show that fur can be an ethical choice. All the furs I’ve used have been ethically sourced and I’m juxtaposing that against ‘non ethical’ leathers to make people think about the materials they use. People often look at leather and think ‘oh that’s fine’, but then say ‘oh look at that fur – it’s horrible’ – my project is the opposite way around. 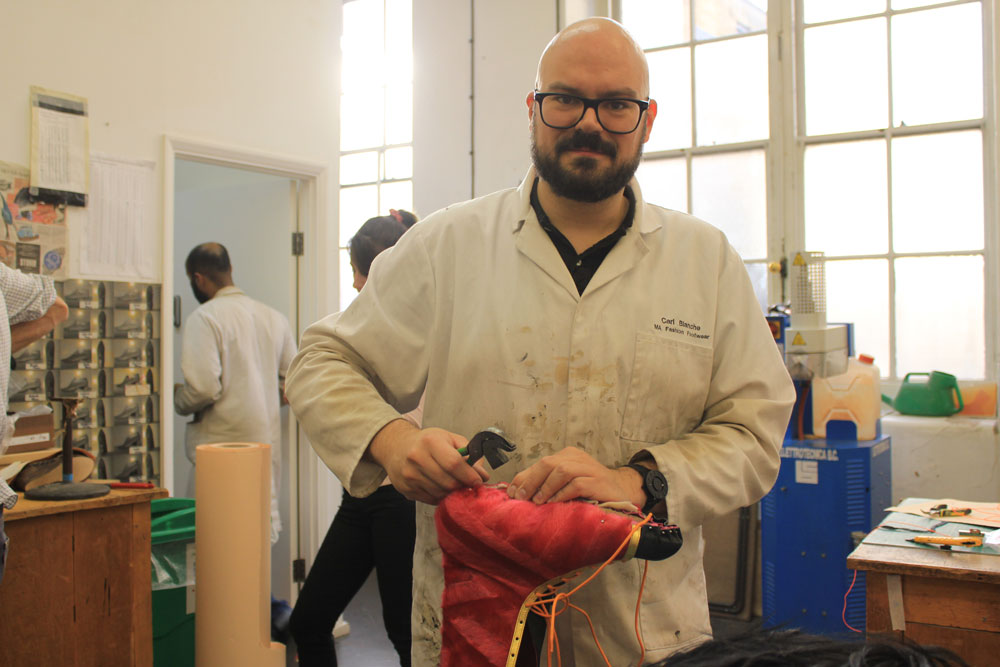 What do you enjoy most about your course? Do you prefer making or designing?

Carl: I like the combination but I really like the making part most. It’s more fun to make stuff you’ve designed yourself. I couldn’t see myself just designing or just making – I think I would be very bored. This is one of the best things about the LCF course – with footwear it’s important to know about the making too. If you make a dress that doesn’t fit properly, it doesn’t destroy your body, but if you wear a pair of shoes that aren’t made correctly you will actually destroy your feet.

Michele: The combination is great because you deign and then you can see it coming alive – the greatest thing is being able to do both.

What would your top tips for prospective students be?

Carl: If you don’t have any experience of footwear at all then do a short course in shoe making because you are going to be making the shoes yourself. Some people do get them made elsewhere but if you don’t know how to make, it’s more difficult to speak to a factory because you don’t really know anything about how shoes are made.

Michele: Doing a short course beforehand is also important because then you don’t waste your time. You also need to be prepared for lots of work and not to have a life sometimes!

What are you going to do when you finish?

Michele: I’m carrying on with my brand and working with the communities in the Amazon. We’re looking to get funding for it.

Carl: I would like to do bespoke footwear and maybe work in orthopedics to learn that craft too. It might not be fun design wise but I think I would learn a lot about comfort and how to adjust a pair of shoes to each person’s feet.