Life of Alumni: a world of fantasy with make-up and prosthetics artist Tabitha Mei-Bo Li

Before becoming a successful freelance hair and make-up artist, Tabitha started her training at West Thames college. After obtaining her diploma, she decided to continue expanding her skills and knowledge with the BA (Hons) Hair, Make-up and Prosthetics for Performance at LCF, and since graduating in 2017, she's been working non-stop in projects for film, TV, music and fashion. In this interview, she tells her story and shares some tips on how to build up a career as a make-up and prosthetics artist. 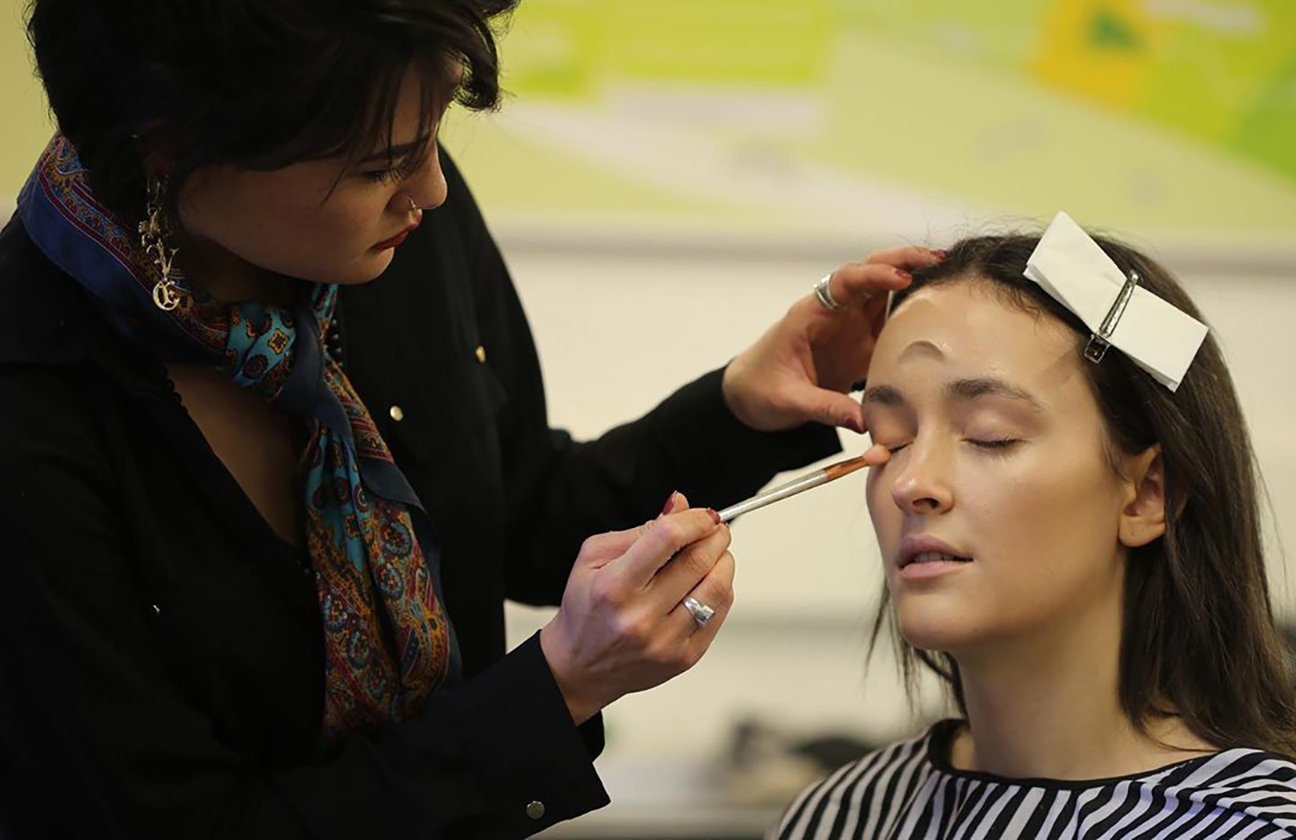 Tabitha Mei-Bo Li working in the set of short film 'You Eat Other Animals?' with actress Anna Ballantine.

Hi Tabby! Tell us a bit about your creative journey. Did you always know you wanted to become a make-up artist and hair stylist?

I always knew I wanted to be an artist, painting, sculpting, that sort of thing. But it wasn't until I was around 17 that I started to explore the possibilities the body offered as a canvas. I had always loved the magic of hair and make-up in film and TV, but I never put much thought into carving out a career within that field. When I started looking into it, I fell in love with the process of transformation and the idea that, if you can think it, there’s a good chance you can make it happen too.

I still make sure that I create a time and space to keep up with my artsy side outside of make-up — it gives me a sense of peace of mind, and it naturally informs my craft and personal style too.

Why did you choose to study BA Hair, Make-up and Prosthetics for Performance at LCF?

I knew that LCF had an unparalleled reputation within the world of hair and make-up, and mid-way through my Diploma at West Thames I decided I would apply to the course. In all honesty, I didn’t think I would be offered a place, and when I was called for the interview and received the offer I was pretty taken aback. Up until that point I had never truly considered the idea of pursuing a university degree, but I didn’t want to let that deter me so I threw myself into it. What did you enjoy the most about your time in the course?

Coming straight onto the BA from a previous make-up course allowed me to get really stuck into the degree, building on the basics of what I had already learned and utilising the studio time as much as possible. What I loved the most about my course was putting together a film about child marriage for my Final Major Project. I loved the research aspect of it and it was so much fun crewing up, designing, organising and creating something that was entirely my own.

You’ve been very busy since graduating! How did you start your journey as a make-up artist after finishing your studies?

I knew the industry was pretty hard to break into, so I actually I started assisting and working on student/low budget films whilst still at uni. Quite often I found myself juggling it all and running from class straight to a set.

I took any opportunity that presented itself and dedicated a lot of time to emailing new people, building relationships and remaining open to new things.

The aim was to gain as much experience whilst still training so that after I graduated, I would have a small pool of contacts and a bit of professional experience under my belt. Thankfully, this paid off and over the last few years I’ve been able to build up a steady freelance career off the back of that.

Photoshoot for House of Holland with hair and make-up by Tabitha Mei Bo-Li.

I think a great deal of this industry is about putting in to get out. Despite a handful of jobs, I was generally working for free for the first couple years, with perhaps some expenses being covered. It was disheartening at times, but it often led me to new people and new jobs.

You’ve worked on projects for film, TV, fashion editorial, music… which area do you prefer?

Generally speaking, I tend to prefer indie films over big budget films as there’s usually a bit more creative freedom there. I’ve also come to realise that the bigger the budget, the more corporate the environment, which doesn’t really suit me. I love the darker, creative side of fashion and music videos as it's usually a cool idea executed over a short space of time, although there’s never much money in them. But every job is different and it allows me to work alongside a new set of people — you never know what fun you might have and where!

From all the cool projects you’ve worked on, what’s been your favourite one?

I’m really loving an indie film I'm currently working on. Because we’re still shooting I can’t divulge too much information other than it being very prosthetic heavy and involving a lot of myth, faeries and movement. We begin filming the second block in Ireland in March so I’m really looking forward to that! 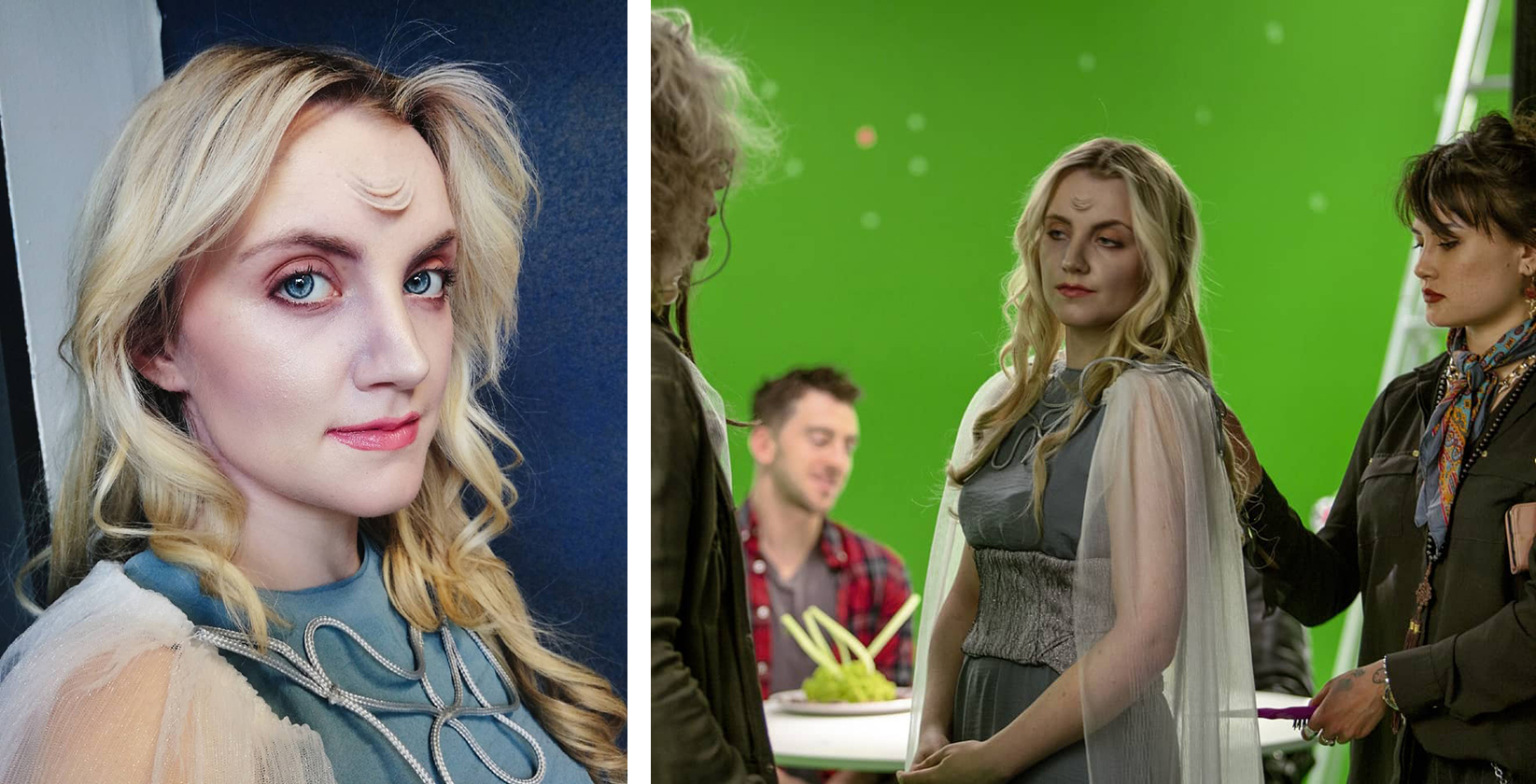 Tabitha Mei-Bo Li working in the set of short film 'You Eat Other Animals?' with actress Evanna Lynch.

What do you love the most about your profession?

I think one of the things I love about my job is that I’m always working in new places, on different things with different people. It keeps me engaged and exercises my creative mind. I love coming out of a meeting with a director after they’ve asked for something seemingly unachievable, and yet somehow miraculously breathing life into their vision through my work. For me, that’s magic and I love it!

I read on your website you’re promoting the use of ethical, cruelty-free products. Why is this important for you as a make-up artist?

I think if you’re at the forefront of any industry, it’s your responsibility to try your best to help develop it. When it comes to beauty products, as a make-up artist I strongly believe it’s my duty to educate others and prove that we don't need to be testing products on animals or messing around with nasty chemicals to achieve a ‘look’. I'm really impressed with how quickly larger brands are starting to redevelop and evolve to cater to this shift in the industry, and I think the future really is looking up!

Prosthetic and make-up work by Tabitha Mei-Bo Li during her second year at LCF.

What piece of advice would you give to potential students looking to study Hair, Makeup and Prosthetics for Performance at LCF?

Before considering any course, do your research! Research the industry, research the role, research people within it and people that have come before. A degree doesn’t guarantee you anything these days and so you must make sure you’re passionate about it — at the end of the day, passion is what’s going to fuel you. I think it's also important to either remain or become versatile.

Versatility within this industry means you’re more likely to get regular work and also allows you to remain open to opportunities – afterall, who knows where they might lead!