BA Hair and Make-Up for Film and T.V. students (now BA (Hons) Hair, Make-Up and Prosthetics for Performance), Jenna Scruton and Kamilia Harchi discuss their elaborate wig designs and personal inspirations. Both students’ work can now be seen at the BA15 Exhibition. 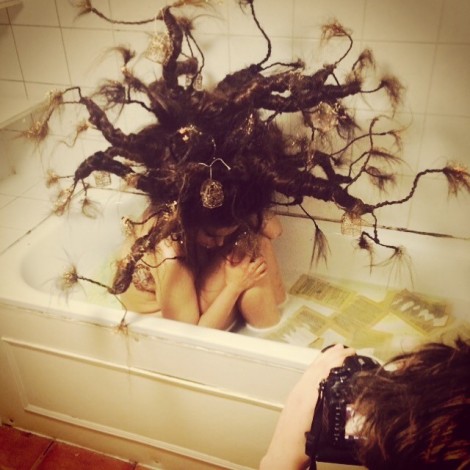 Work by Jenna Scruton, BA (Hons) Hair and Make-up for Film and TV

LCF News: Where are you from?

Kamilia Harchi: I was born and raised in Warsaw, Poland but now reside in North London.

LCF News: Give us one interesting fact about yourself…

JS: I originally trained as a professional dancer/dance teacher before changing careers.

KH: I have an avid interest in taxidermy, displaying and maintaining a significant collection. Some of these pieces have been incorporated as props within my work.

LCF News: Talk us through your final project…

JS: I have suffered with depression for most of my teen/adult life, after many treatments I found my own salvation in art, here I was able to channel this destructive illness into fuelling my creativity.  It was through pushing myself creatively I was able to get a grasp on the world around me and my own disordered thoughts and feelings.

As this is a major part of what makes me essentially ‘me’ I wanted to base my project on depression.  I wanted to also help raise awareness of this illness to the audience. I used the text The Bell Jar by Silvia Plath to act as an initial starting point for my project.

KH: My final project focusses upon the construction of two main characters, utilising colour to highlight the dichotomy between freedom and the restrictions of censorship.

Utilising my skills in wig-making, postiche and prosthetics I was able to achieve a striking contrast between the two characters. The ‘Professor Inkblot’ inspired character is colourful and exuberant, featuring a 5-foot-long kaleidoscopic beard. Whilst his faded evil nemesis ‘Mother Russia’ sports a dishevelled wig and a creepy headpiece, accompanied with legions of small heads, representative of the victims possessed by the character. 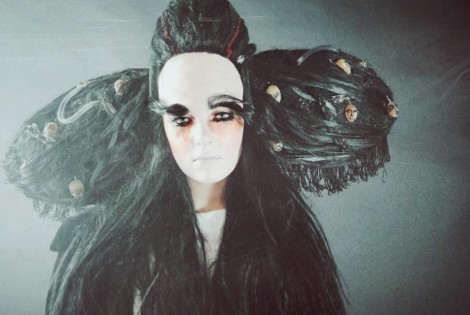 Work by Kamilia Harchi, BA (Hons) Hair and Make-up for Film and TV

LCF News: What do you love about what you do?

JS: I love the creativity of make up and that art has no bounds, your only limitation is your own mind.  I love creating make-ups and characters then seeing the finished product as an actual embodiment of what was once an idea in your mind. 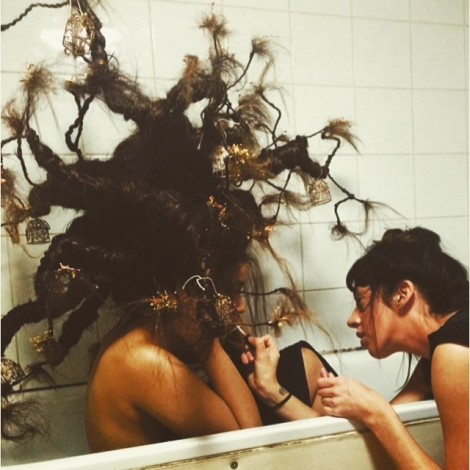 Work by Jenna Scruton, BA (Hons) Hair and Make-up for Film and TV

KH: The opportunity to translate the most challenging or surreal ideas into an existing piece of art, through the medium of hair and makeup. I try to make each project as personal as possible and the face and body act as an ideal canvas to convey my ideas.

LCF News: What is the story behind your final piece of work?

JS: The way I wanted my final project to be filmed was in a glitchy/distorted way.  I wanted this to represent the disordered mind of depression.  I also didn’t want it to be a really obvious film about depression; I wanted it to be moving art.

The main character, who suffers with depression, finds comfort and sanctuary when she is in the bath.  It is here she feels still and most like herself despite the depression.  The bath is almost a place of refuge where her disordered thoughts can be purged and she emerges feeling more at one with herself.

The final main character which has a large tree wig made out of hair is mainly based on a quote from the bell jar communicating how depression holds you back by manifesting your fears of actively finding your happiness.

KH: My final project is loosely based upon the cult Polish children’s novel ‘Academy of Professor Inkblot’ and is representative of the lack of freedom experienced during Soviet occupation. Taking inspiration from the glorification of ‘Mother Russia’, I created a majestic and almost monarchical persona through my statement headpieces. 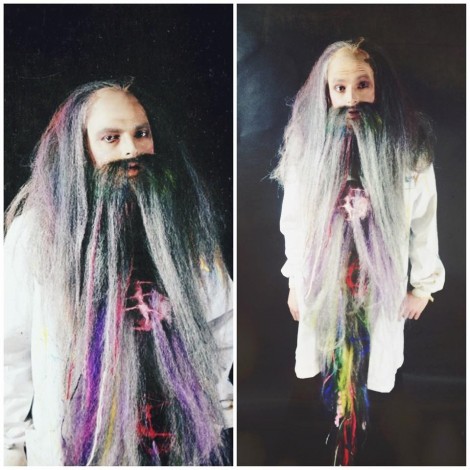 Work by Kamilia Harchi, BA (Hons) Hair and Make-up for Film and TV

LCF News: What techniques or theories did you use to create your final piece of work?

JS: The main piece I concentrated on was a statement wig piece.  This was the creation that really communicated the text my initial ideas were based on.  This consisted of a reinforced foundation, elaborate wig cage, knotting and decretive dressing.

KH: Both of my characters also contain very elaborate wig designs, which took time to execute correctly. Whilst the male character’s highly decorative facial hair is much more explicit in design, the female character is much more conceptual. This allowed me to utilise an array of techniques to portray metaphorical nuances; from a vacuum form mask behind which the character hides, to the silicone prosthetic eye-bags, hand knotted wig and the head dress which features multiple small heads that I sculpted and moulded, hidden as prisoners.