BA (Hons) Fashion Design Technology Womenswear alumni Daniel Pascal Tanner has been selected for this year’s Oxford Fashion Studio (OFS). He will be showcasing his AW16 collection in the ‘Sponsored Designer’ category, a position which is offered to a small number of designers who represent the ethos of OFS. 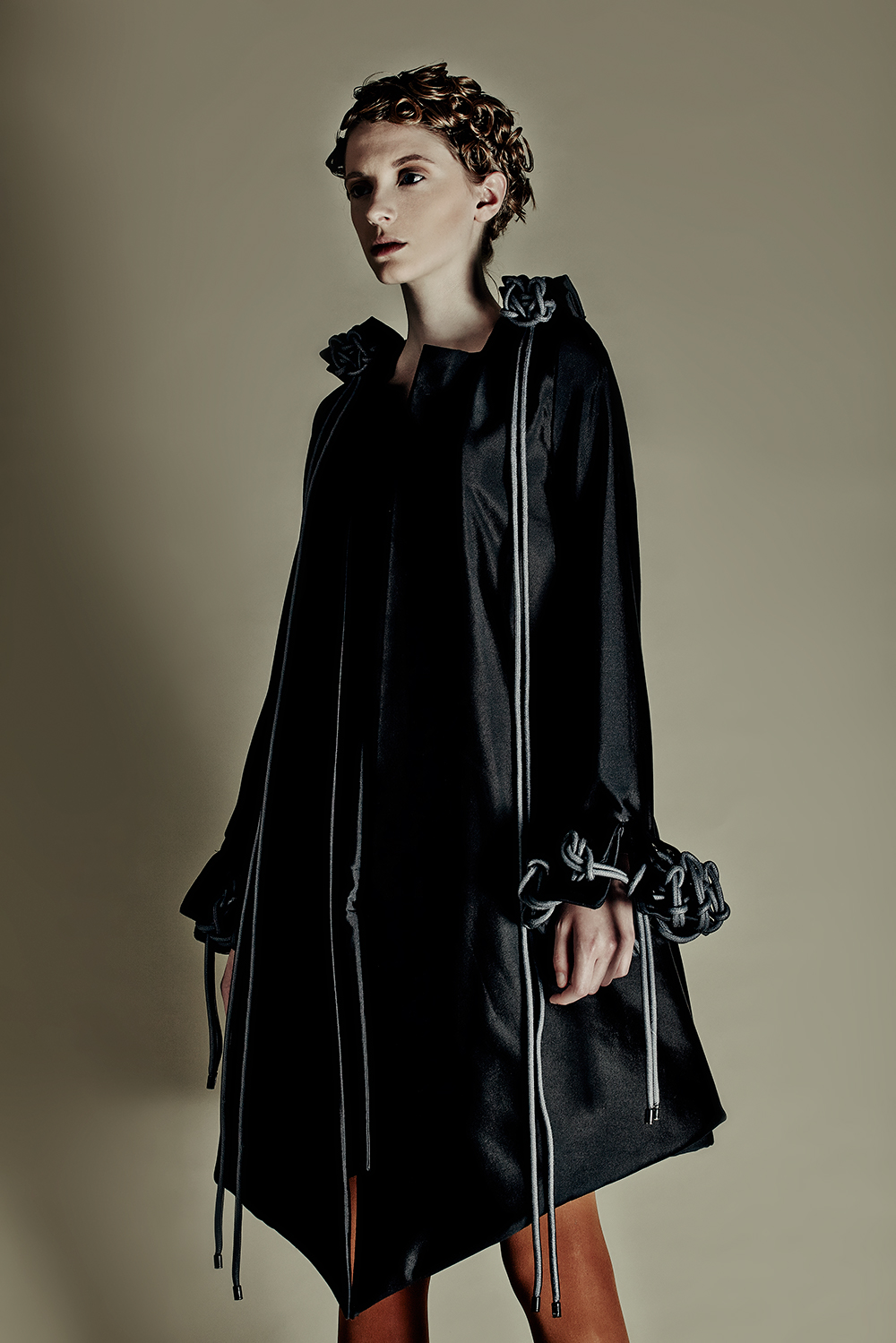 Daniel’s collection will be shown in three different cities as Oxford Fashion Studio travels the world. It will coincide with London Fashion Week on 21st February, Paris on 5th March, and ending on 20th March in Oxford. The ‘Sponsored Designer’ category is intended to nurture and support aspiring industry professionals who match the ethos of the organisation.

Born and raised in London, Daniel didn’t have the most conventional route into womenswear. Before coming to London College of Fashion, he attended the BRIT Performing Arts School in South London and Laine Theatre Arts before going on to perform in several of London’s West End productions. He use be a performer and dancer in Phantom of the Opera and We Will Rock You, before wanting to pursue a career in fashion. Daniel says he incorporates his theatre heritage into his design style, LCF News caught up with him ahead of the shows to discuss starting a label and Oxford Fashion Studio. 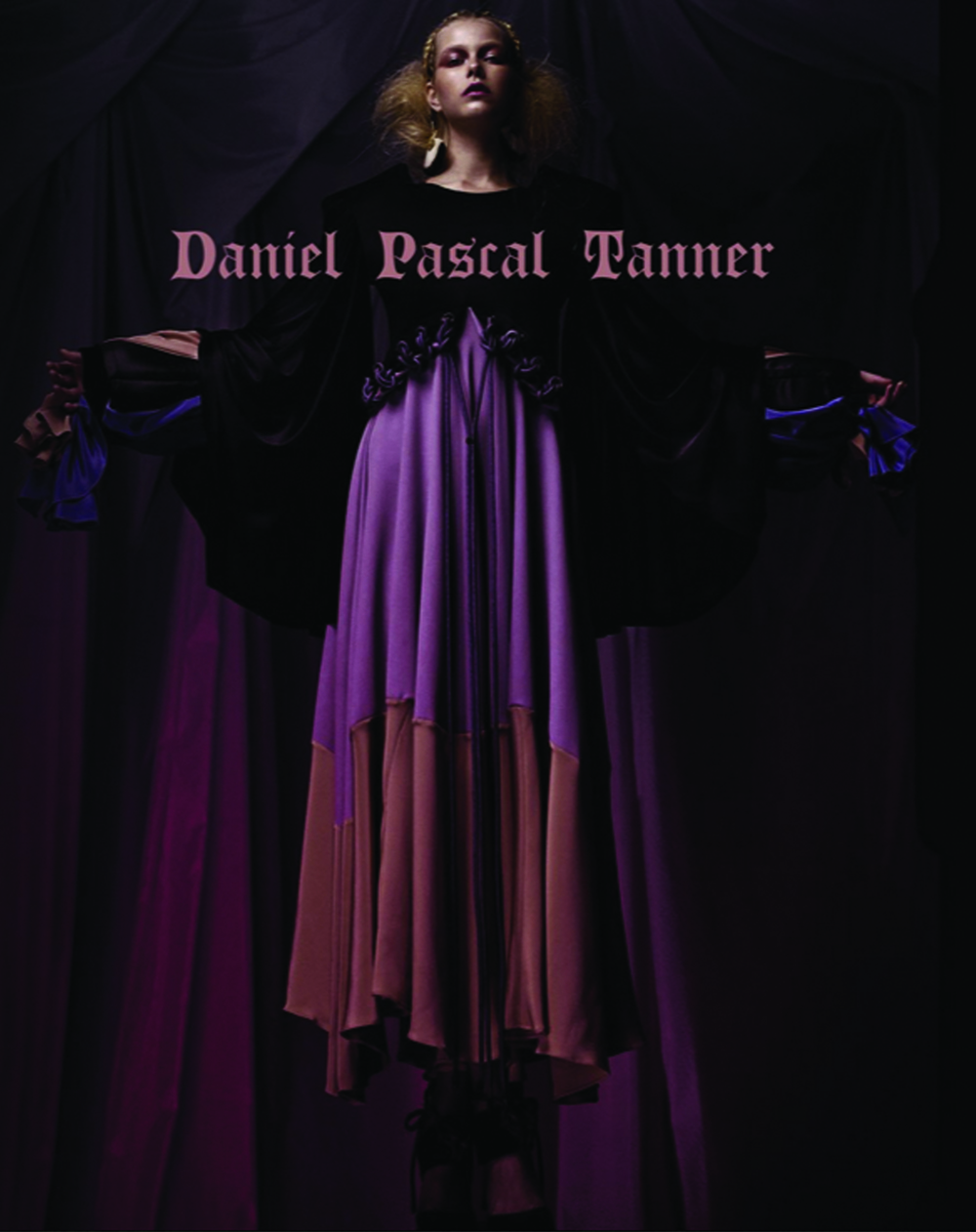 Did you always want to be a designer, what made you want to study Womenswear at LCF?

Costumes, fashion and expressive arts were a huge part in my early development. I was always drawing, doing crafts and performances so it came as no surprise when I finally decided to pursue a career in fashion after ten years of working in London’s West End as a dancer in many musicals. During my dancing career my passion for personal expression, creativity and art was maintained by taking in classes, workshops and exhibitions. I did taster courses at UAL and found LCF was the right environment for my personality. I’ve had the good fortune of studying at several prestigious creative institutions such as The BRIT School, Laine Theatre Arts and LCF had that same energy about it. Vibrant, happy and exciting!

You graduated in 2014, what have you been doing since?

Since graduating I’ve shown my work as part of the Art Of Dress exhibition that was shown in New York, Shanghai, Florence, Dubai and finally in London at an exclusive event at St James Palace with the Countess of Wessex. My collection has been featured in many fashion magazines and online publications such as Vogue Italia – which has been a great way of forging my identity as a designer. I’ve also been working with a menswear designer for the past year assisting him in all aspects of his start up. Money in fashion is virtually nonexistent so I’ve also been working part time as a bookings coordinator for a creative agency where I’ve made lots of industry contacts. Now, I’m looking forward to showcasing my AW16 collection during London Fashion Week on Sunday 21st February as part of Oxford Fashion Studio’s (OFS) ‘London Collection’ runway shows. 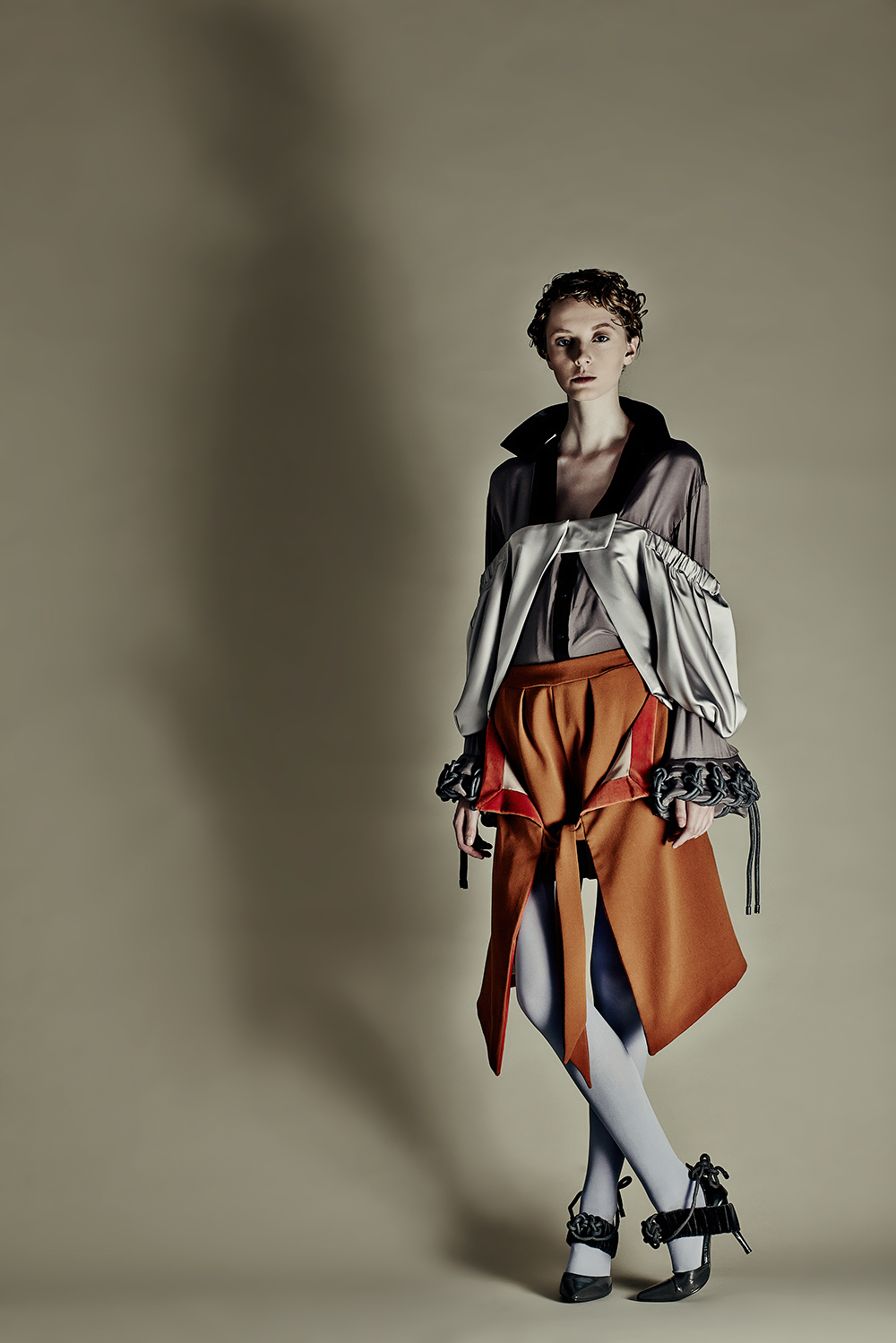 Were you ever prepared for the business side of fashion?

No! There’s so much to learn beyond the processes involved in creating a collection. There are organisations out there to give designers advice which is fantastic but I’ve found that they assist small labels that have perhaps already gained stockists, done showrooms, and have made several collections. I found working within the industry is a great way to learn about the business of fashion!

You have a background in theatre and the West End, how would you describe your style? 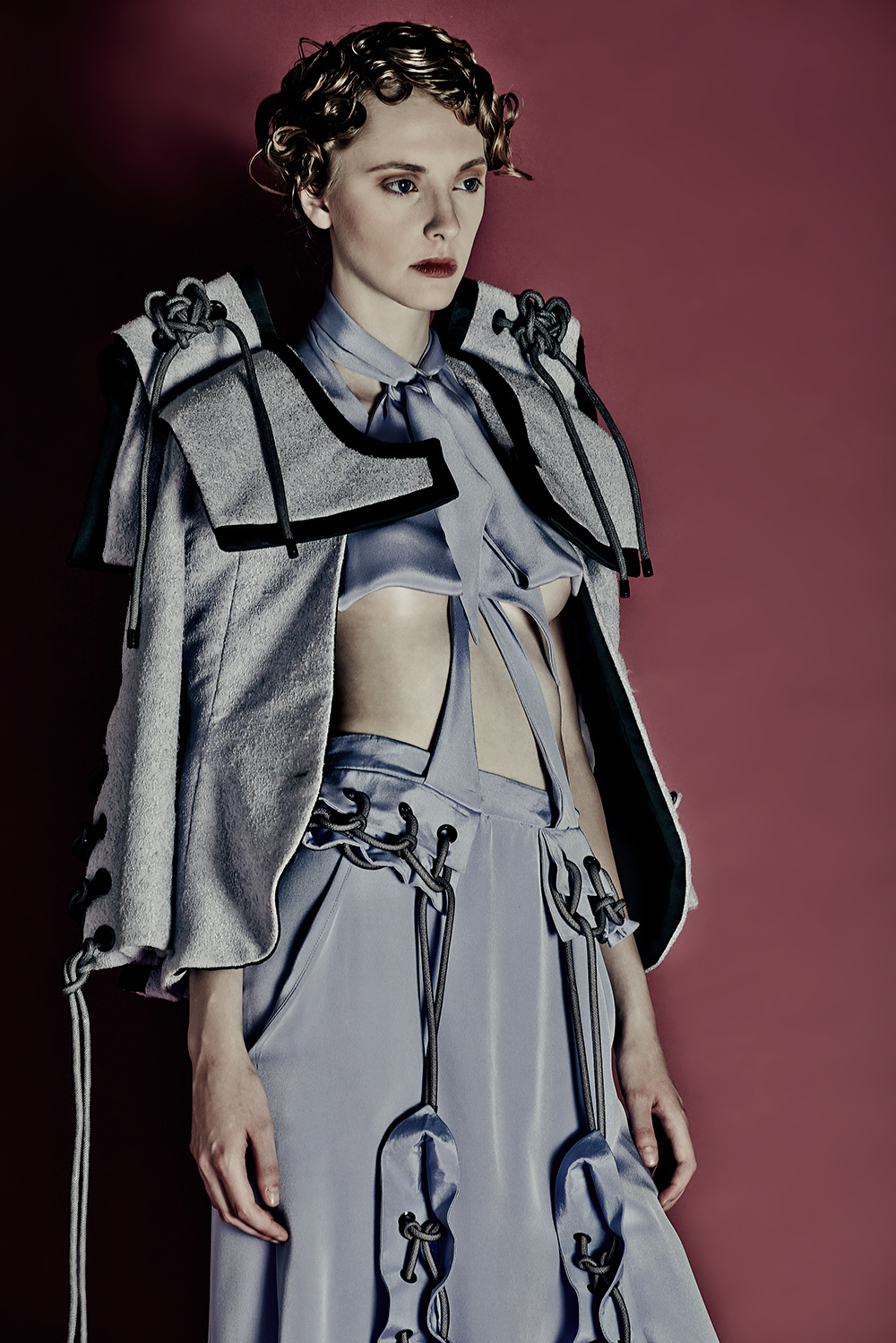 What’s the hardest thing about starting your own brand, and how do you overcome it?

Getting money together to manufacture a collection is a big hurdle. It can be challenging to figure out how you will get the collection into boutiques if you can’t afford to do a showroom to meet buyers. A lot of new designer do have stockists, but on a sale or return basis, which can be risky! Learn about the sales process and look out for opportunities that can offer you a platform to exhibit your work for free, maybe it’s a pop up project where you can sell one of your pieces, or by creating an online shop. Also, invest in platforms that specifically promote emerging designers and provide a strong springboard for showcasing your work – such as Oxford Fashion Studio. Its easy to get swamped down by already established brands, but with companies such as this the emphasis is on original designs. Everyone industry-wise who attends their events are looking to stock, partner with, write about or work with original designers – which is great! You’ve been selected for Oxford Fashion Studio 2016, what sort of platform is this for young designers?

OFS have showcased over 373 designers from 34 countries, exhibiting 3,963 looks since 2009. Amongst the many people who have attended or participated in their events in previous years are Dolly Jones (Editor, Vogue.com), Caroline Rush (CEO, British Fashion Council), Claire Wilcox (Fashion & Textiles, Victoria & Albert Museum), male supermodel David Gandy and on top of that Anna Wintour visited Oxford during the 2015 season of Oxford Fashion Week and spoke of her life and work.

The designers that they showcase each season are based purely on design quality which is great news for young designers such as myself. They produce shows during New York Fashion Week, London Fashion Week, Paris Fashion Week, Oxford Fashion Week and in cultural capitals around the world. This season, I am thrilled to have been given a “Sponsored Designer” position; this is something they offer to a small number of designers every year as part of their ethos to nurture and support aspiring industry professionals. As part of this they also offer discounted student tickets to attend the events. I’m extremely excited to be showcasing my work with them this season! 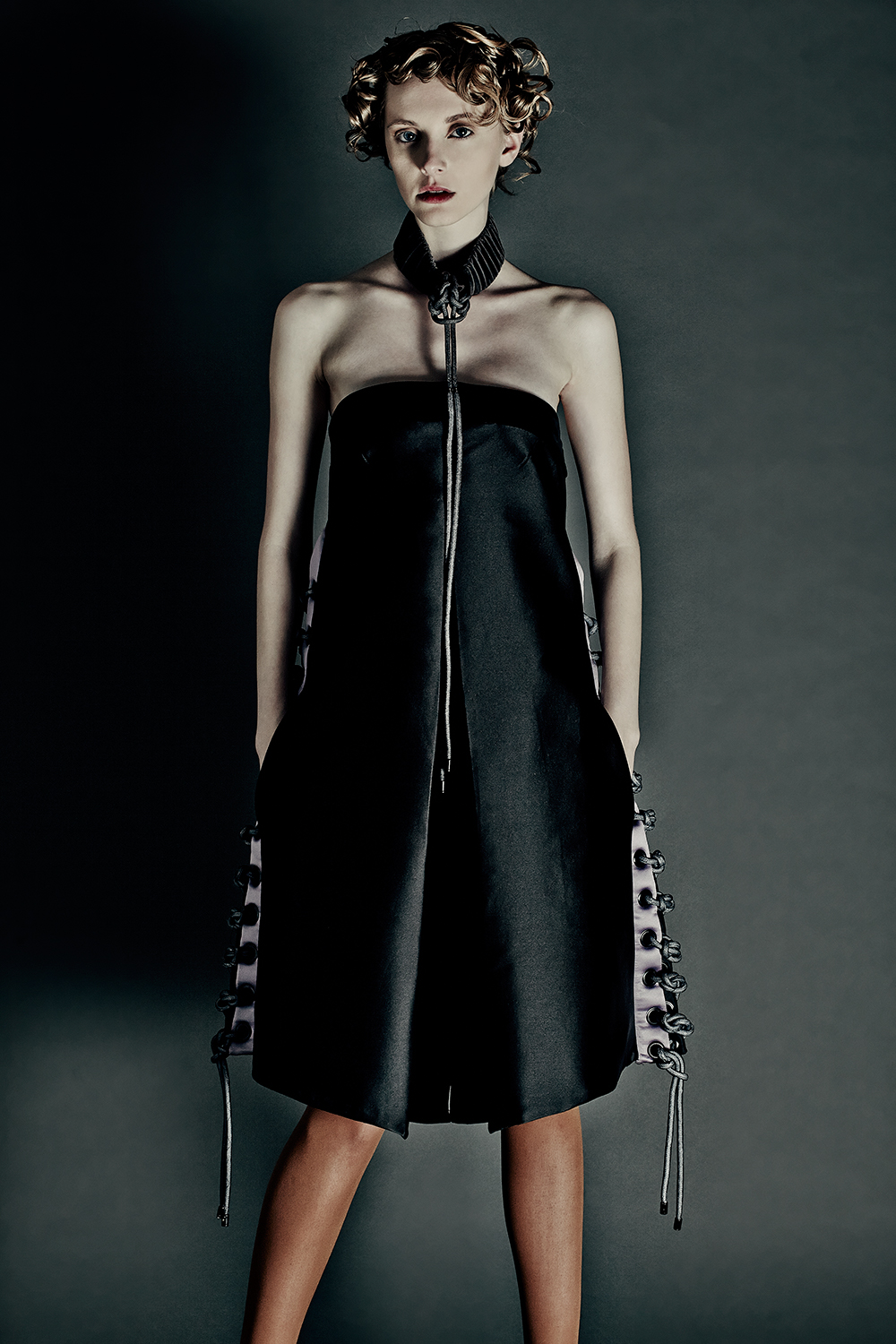 Can anyone attend, if so, how?

Yes! Thats the great thing about the event, it’s open to everyone – buyers, press, bloggers, students and the public. Tickets can be purchased via their website. Fashion & arts students can also take advantage of the massive student discount by emailing.

London is a competitive place for designers, is there a secret to getting recognised?

I think students that get on to fashion design degree courses have been selected because they’re interesting and stand out from thousands of applicants which is a good start. The degree itself will teach you skills but you need to continue exploring and understanding yourself and talents to create your unique perspective. Know yourself, be yourself!

You can see Daniel’s AW16 collection on the runway at 5pm on Sunday 21st February at Devonshire.