Becoming a designer was more of a natural realisation than an epiphany for menswear graduate Lukas Neo. Born in Singapore, a country more commonly known for housing international fashion giants for the banking elite than harbouring designers and bohemians, Lukas began his career in magazines. What started as a writing job, evolved into photography and later designing the magazine itself. He tells us that he suddenly became conscious that he had a “knack for design, a natural sense of how things should be, where things should go.” 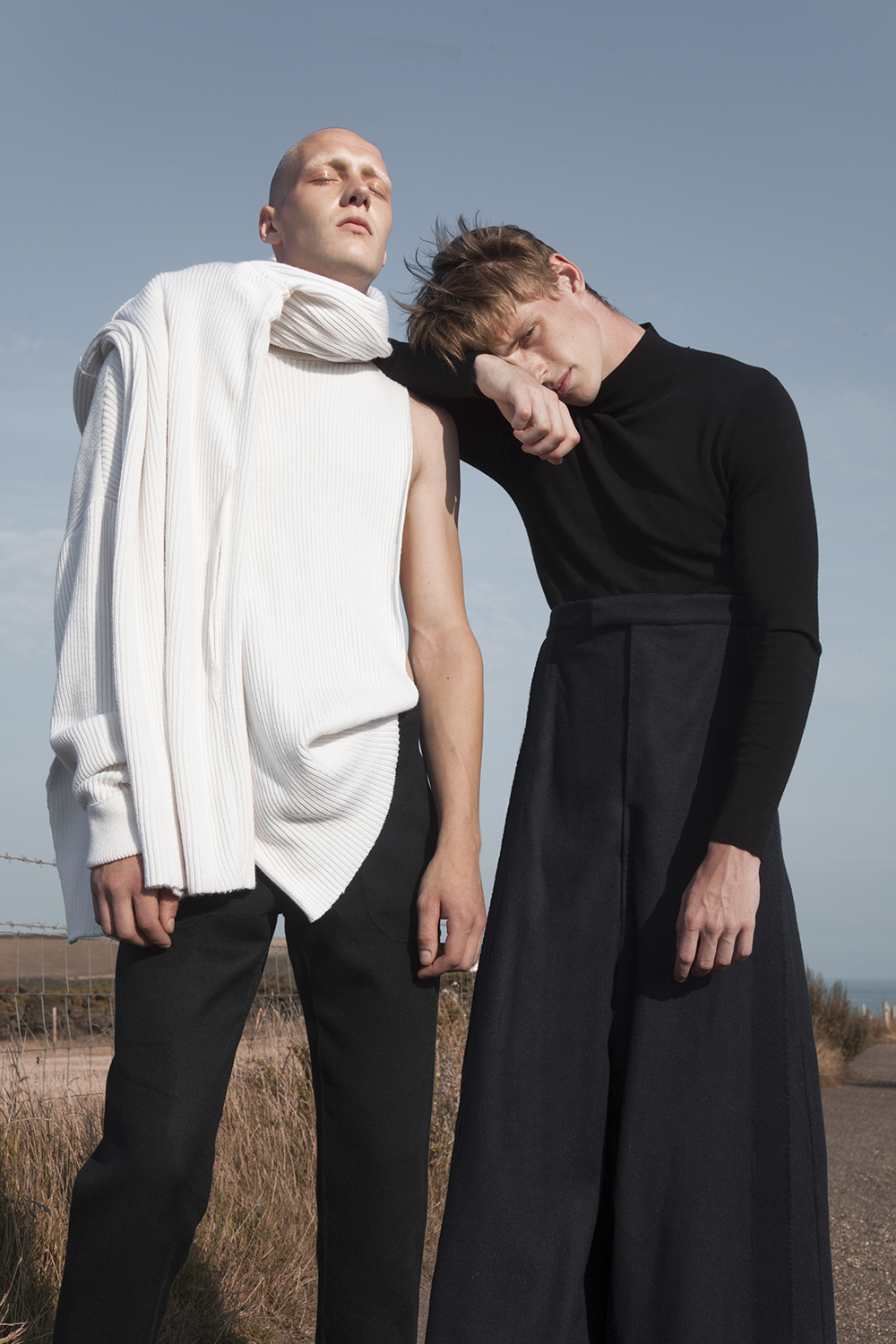 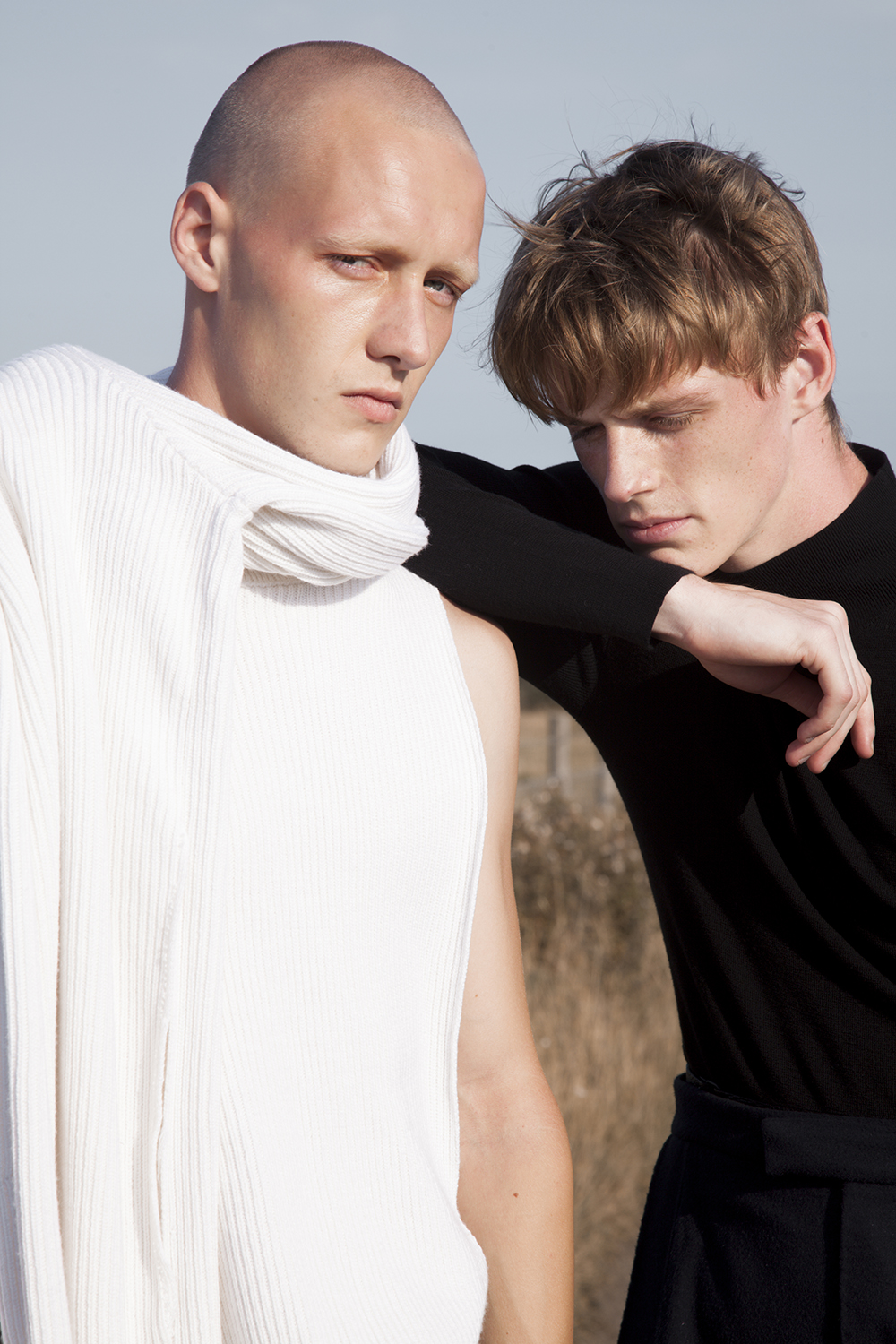 In hindsight it shouldn’t have come as a such a surprise, he tell us. Growing up on the island city-state off southern Malaysia, Lukas always had a very stubborn taste in everything – whether it was the colour of the food he was eating, or how he wanted to tuck in his school uniform – much to his mothers annoyance. His stubbornness in taste matured into designing, he now tells us that he’s “afraid of going through life without creating.”

So why leave Singapore, what made you want to study BA (Hons) Fashion Design Technology: Menswear at London College of Fashion, we ask. “LCF Menswear has always been more technical in their approach. I really appreciated that as I made my first step into the industry,” he tells us. Menswear design has a certain boundary, that’s what drew him in originally. Lukas appreciates that you have to be very aware of what you are creating, and the man who’d be wearing it. He describes the relationship men have with brands, how there’s certain codes that bring loyalty, continually finding the balance between innovation and utility, that’s what he treasures about menswear. Swapping the equator for east London in 2013, Lukas enrolled at the university. He caught our attention this year with his AW16 lookbook and appearance at LCFMEN, an event exploring fashion’s relationship with masculinity. We wanted to dig deep into his State of Mine collection, so we sat down with him.

“I wanted by first collection to be autobiographical,” he begins to describe, “It was very cathartic, seeing me come to terms with my aesthetic and personal anxiety.” This collection was a journey of raw emotions, sexuality, nerves and stillness all at the same time. He wanted to portray his “exhaustive personal struggle in achieving the masculine ideal, while grappling with the feminine sensibility in” himself, which pushed him to “question and give form to this struggle.”

So now we have the idea behind the collection, what did he end up creating? “I wanted to design a renewed uniform. The manifestation of femininity against the male form. Through the focus on silhouettes and proportions. The collection takes inspiration from the relationship between body and clothes, drawing ideas from architectural sensibilities, such as negative space.”

Conveying the physical embodiment of emotion was what was important to him. The feeling of wearing a coat for the very first time after a long summer – a state of melancholy and power, rolled into one, that’s what he was after. “These emotions were key to my aesthetics for this collection – my State of Mine,” he says. 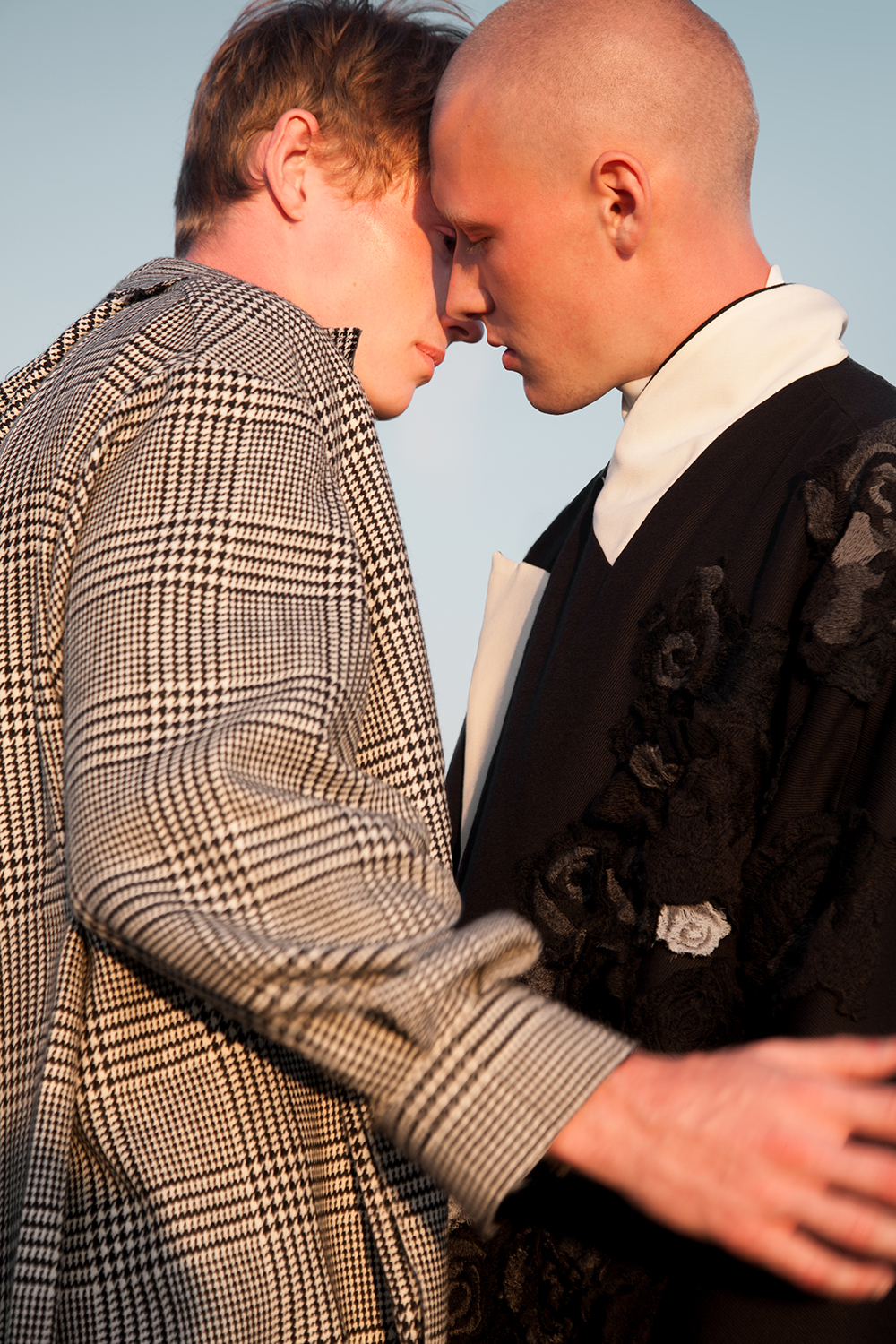 Like his favourite designers, Kris Van Assche and Phoebe Philo, Lukas wanted a real sense of purpose in his work. He believes the pair bring a fresh air of refined modernity to their work – something he resonates with. He wanted to embed this feeling within his collection.

He took his collection to Seven Sisters, nope, not north London, Sussex. The chalk white cliffs were the backdrop to his Lookbook. There’s something “really poetic” about the area he tells us. Often referred to as the ‘Edge of England,’ it fitted with the narrative Lukas and photographer Wanda Martin wanted to tell. 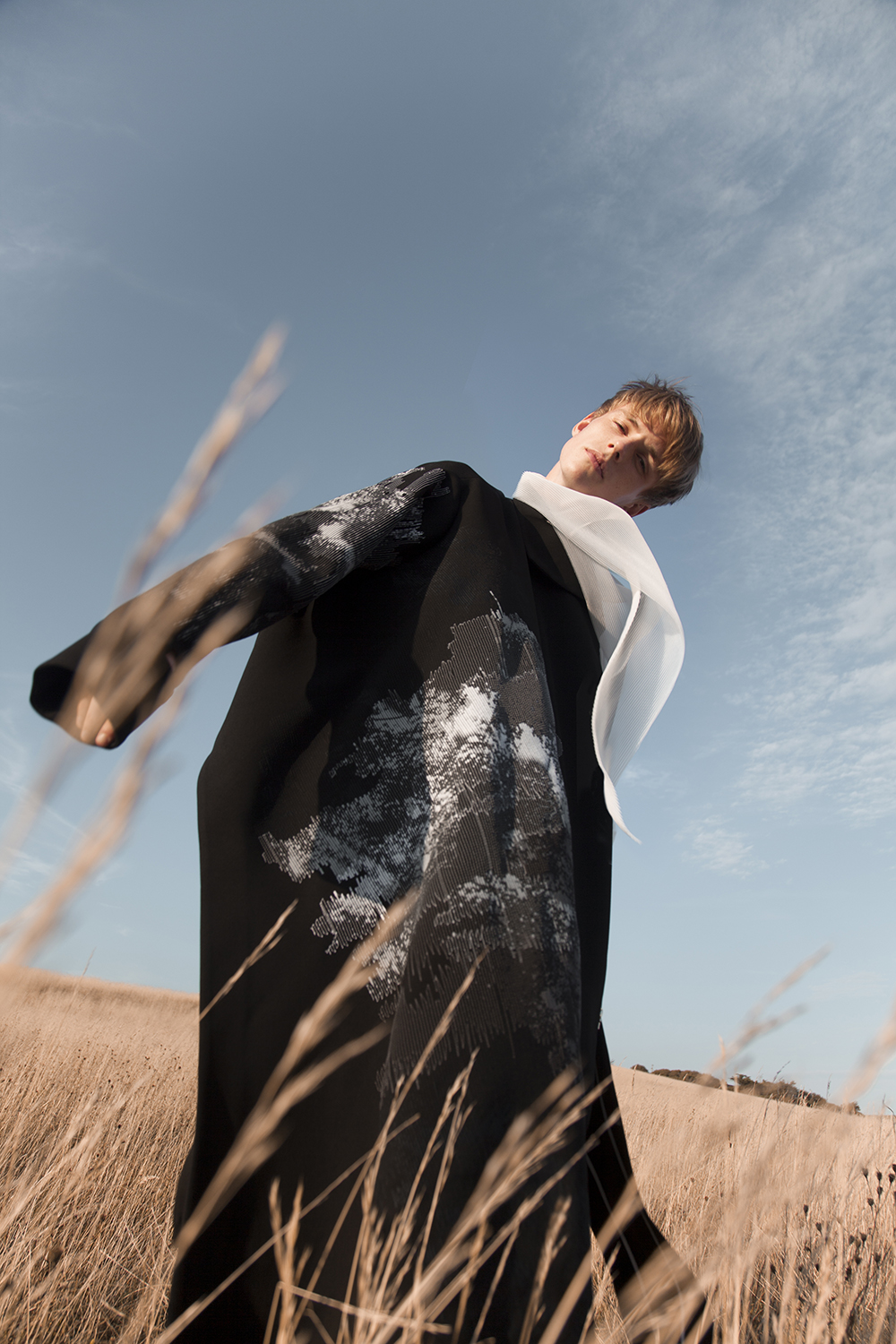 He’s a minimalist, a trend appearing from Singapore, echoed by COLLATE, and ELOHIM by Sabrina Goh. But he doesn’t want to define his brand just yet. “I believe in creating timeless pieces – it’s a lot about quality and the emotional relationship it builds with the wearer. I make clothes that I want to wear myself, and that’s ever-evolving,” he describes.

Lukas has a lot of opinions on the fashion industry, offering his thoughts on the Brexit referendum and how it might affect UK fashion in the future.

Brexit was a very interesting thing that happened this year – amidst the other chaos at the other end of the pond. As a foreign person who’s trying to make a home and build a better life for myself in this country, I’m very sympathetic towards what’s happening. I think the world is better, connected – in all aspects of life, not just fashion. With Brexit happening, I would imagine a much far-reaching effect on our trading, more so on young designers. 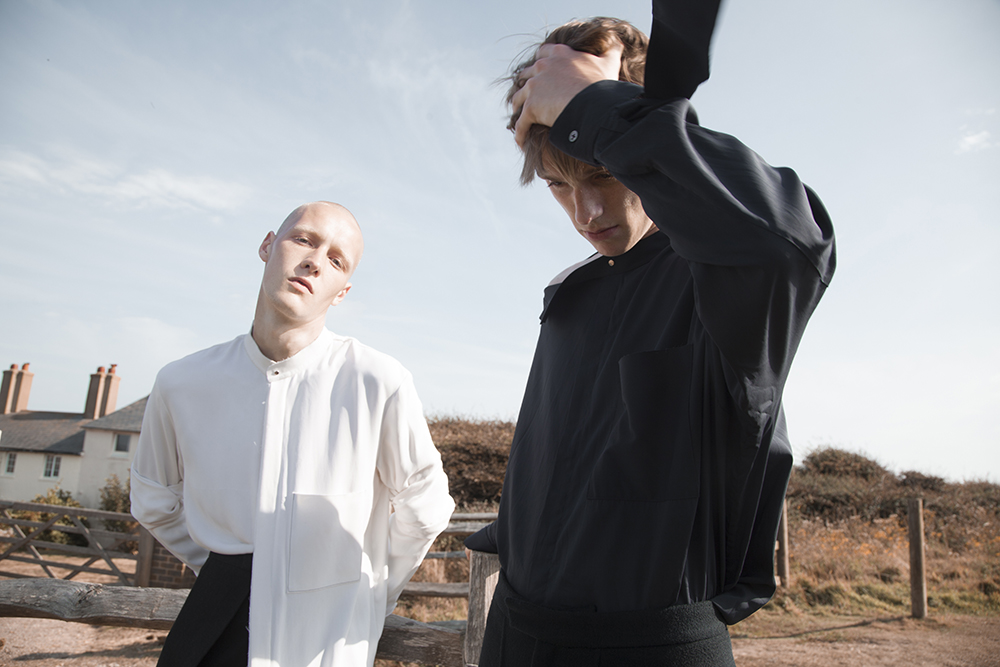 The Government is still in the early stages of negotiating what Brexit might look like, judging the implications it may have for the university and fashion can only be described as ‘speculation’ at this stage. But Lukas isn’t alone, thousands fear what this might mean for trading and the pool of creativity the UK is so dependent on at the moment from across the world. .

With the future in mind and nostalgia about studying at Curtain Road, we turn the discussion to London College of Fashion moving to Stratford in 2021. Lukas had a ‘soft spot for cosy little Curtain Road’, he won’t deny that. But he thinks “it’s wonderful that the college is growing into bigger and better things – and that could only be good for future students.” Like believing the world is better connected, he says the same about housing all our courses at Stratford. The ability to interact with students under one roof is an exciting prospect, he points out.

Lukas is well on his way though. He wants to continue his journey with the label he’s started, taking baby steps, evolving slowly to gain more perspective in new and different environment. He’s about to start his MA in Menswear at Central Saint Martins, where he hopes to create new and more wonderful things.