Last week LCF News were lucky enough to get a front row seat at the MA Costume Design for Performance final showcase, where talented graduates from the course showed off their designs and concepts.

As we entered the theatre space at Lillian Baylis Studio in Sadler’s Wells, we were unsure what to expect, sitting in the pitch black with no clues other than what looked like a large pomegranate hanging from the ceiling. 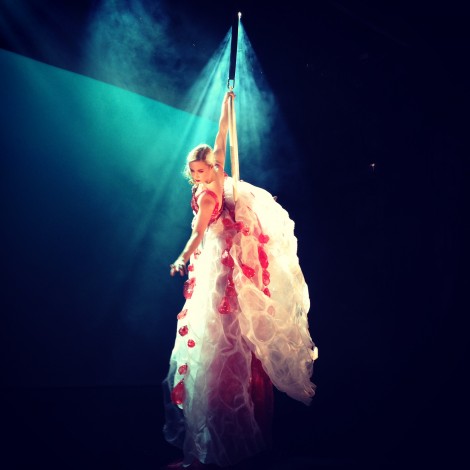 ‘The Love of the Three Pomegranates’ by Martina Montorfani, performed by Emma Fegan

But as the music started and beautiful colours lit up the stage, we were immediately transported into a playful and beautiful circus scene, and as the pomegranate slowly turned, it was soon clear that all was not as it seemed. To the audience’s surprise and delight, a woman encapsulated inside began to unwrap herself from within, transforming her former cocoon into a long and flowing, beautiful dress.

‘The Love of the Three Pomegranates’ by MA15 graduate Martina Montorfani, was based on the folk tale by Italo Calvino where a girl appears from within a pomegranate and passes through several stages of metamorphoses until she gets married and becomes a princess.

The balletic performance used costume in a wonderful way to show connotations of birth and transformation. What a way to open the show!

The show continued with costume concepts expressing themes of childhood naivety, such as Pallavi Patel’s, ‘When Wishes Come True’, sadness and longing, as seen in ‘At his Daughter’s Wedding’ by Maria Costa, and branching out of comfort zones, such as Xinyu Zhang’s ‘The Little Mermaid’, a highlight of which was a white, coral covered swimming cap. 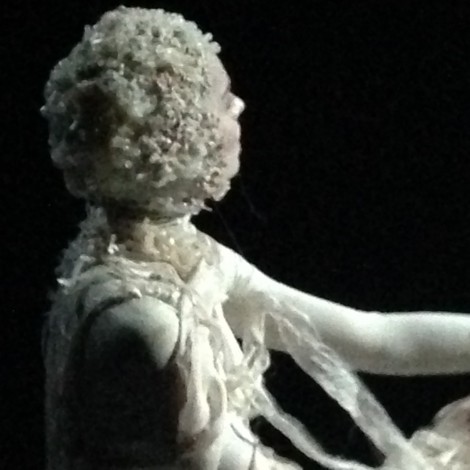 The imagination of these talented students knows no bounds, with shapes and materials used in brilliant ways to convey complex emotions to the audience. A highlight was the origami-esque Snow Queen costume, made by Xiao Yufan, with its sharp-looking 3D triangular shards of ice, juxtaposed with feminine netted ballerina-like fabrics. 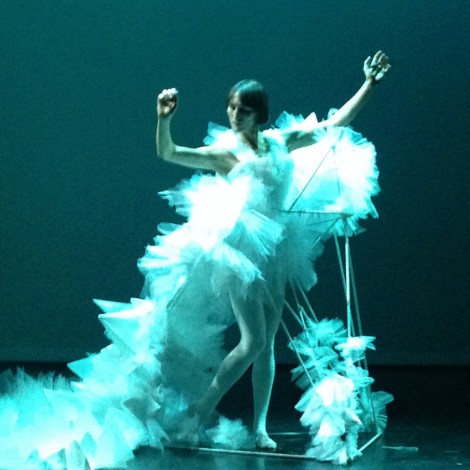 The Snow Queen by Xiao Yufan. performed by Lorraine Smith

Part two saw the mood change, with a more sinister performance by Megha Khanna, inspired by Patrick Suskind’s novel Perfume: The Story of a Murderer. The performance, which saw a man emerge from underneath the latex skin of a supposed victim, sought to encompass the vicious circle of life and death. 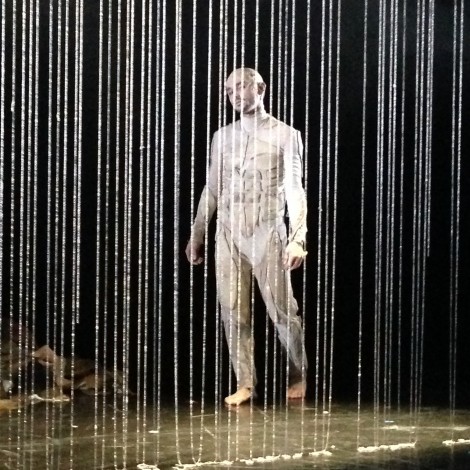 In complete contrast to this, the next design and concept, by Clare McGarrigle focused on the myth of Narcissus and his relationship with the lake, that unknowingly to the character reflects his own image.

The performance saw the lake represented  in a mirrored cape that reflected light exactly as if bouncing off water. The audience witnessed a wonderful dance, which portrayed themes of innocence, curiosity, confusion, misunderstanding, and frustration, connoting Narcissus’ belief that the image he sees is of another person. 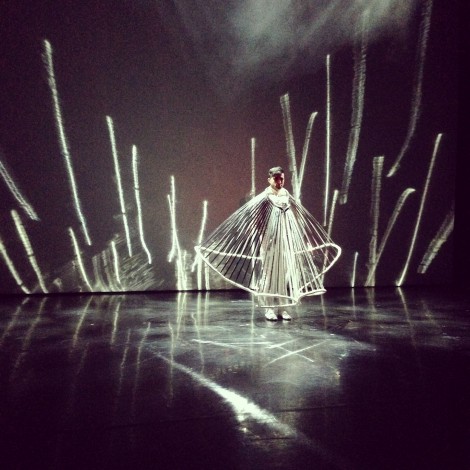 The audience were taken on a similar journey through legend, in ‘Seven Nights of Snow’ by Yue Zhou, in Medea by Alexandra Kapsala, and we saw dream versus reality, in ‘White Nights’ by Pooja Malhotra. Concepts also explored identity within cultural systems, ‘The Queen of the Night’ by Viola Desa De Marchi exploring ideas of patriarchy, ‘La Danza Del Caiman’ by Alejandra Bano Pelegrin reflecting everyday struggles in Columbia, and ‘Piecework’ by Bronya Arciszewska portraying the struggles of working class in a capitalist world. 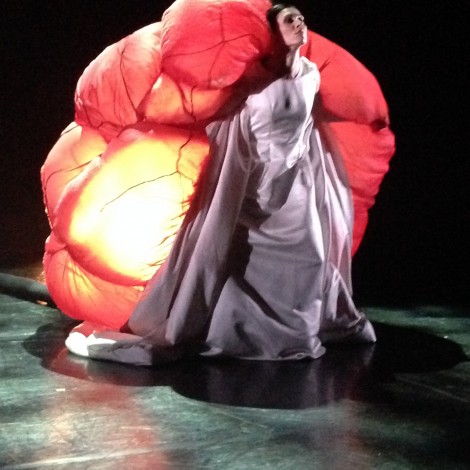 But perhaps the most awe inspiring of all, was ‘Ping’ by Daphne Karstens, based on the piece of prose by Samual Beckett. The performance visualised the struggle of a person submerged in an unknown and ephemeral world, exploring the relation between the physical body and out-of-body ‘spiritual body’.

Daphne’s visualisation allowed for two costumes in one. The first, a barbed wire covered, mesh cocoon, which represented the physical body, and the second, a more lucid material that allowed for movement. In Daphne’s words:

“The spiritual body is ephemeral; it might only exist for the briefest of moments”

And with this distinct in the audience’s mind, smoke billowed from the second costume from tubes which ended at the performer’s hands. 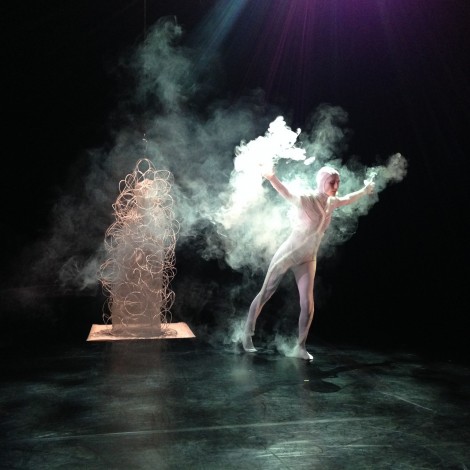 “The show was simply wonderful and so inspiring – it gets better every year!  The work was of such a high standard and conveyed such energy, imagination and emotion – I was so proud.”

The MA15 final showcase was a resounding success! A big congratulations to all of the students involved, and we wish them luck in their future careers.