BA (Hons) Creative Direction for Fashion student Araxie Boyadjian won a competition set by London’s Victoria and Albert Museum to illustrate their new exhibition Undressed: A Brief History of Underwear, which saw her curate a live performance in the museum’s pond. 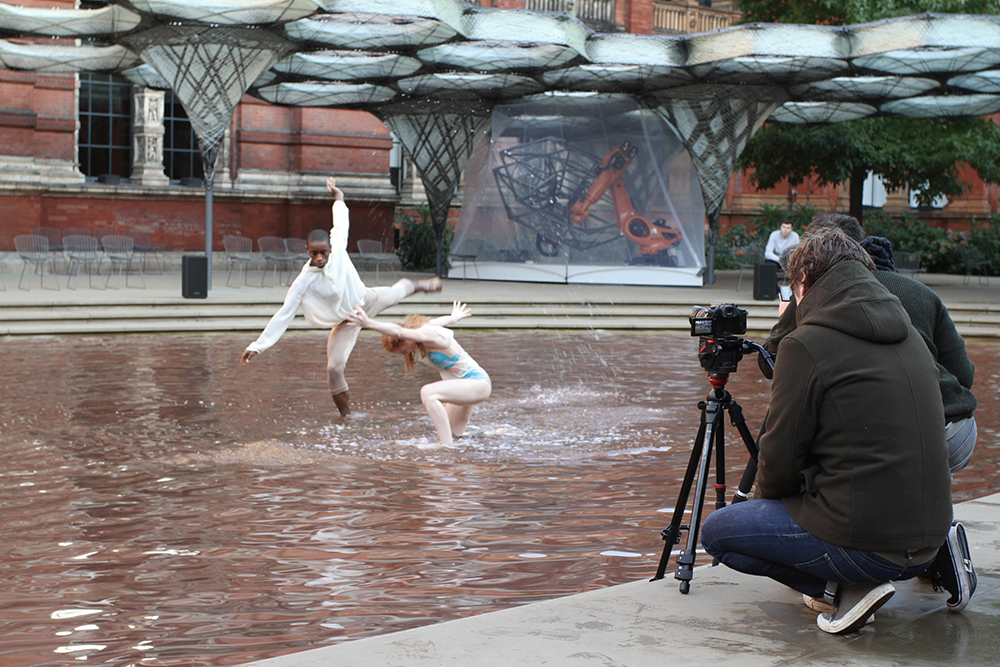 Creative Direction students were briefed by the museum to use a time-based media in a site-specific capacity, which would be used to promote the new exhibition. Students were also asked to create accompanying Instagram content. Araxie’s winning entry, Memories Before History, combines performance, fabric technology and sound in a site-specific dance.

Araxie worked with BA (Hons) Fashion Pattern Cutting student Lola Rosero, who she met while studying LCF’s International Preparation for Fashion course. She also enrolled Aaron Chaplin and Flora Grant from Trinity Laban for the live performance at the Madgeski Garden Pond, which was also reinterpreted at St Pancrass station on 7 November.

The performance will be turned into an Instagram video for the exhibition, which will be screened at Kings Cross Station’s public informations screens in the coming weeks. Instagram videos created by Hann Tranova, Owen Davies, Jennifer Lafer and Megan Boyle, will also be shown a the screens.

How did the collaboration come about and what was the brief set for the project?

Araxie: The aim of the competition was to write a proposal about an intervention (projection, performance, fashion film) to showcase their new exhibition. They also wanted us to create great Instagram visuals. 80 Creative Direction students participated, and I was the lucky winner. I explained the concept to our dancers Flora Grant and Aaron Chaplin, I researched choreographies and compiled them in a sequence along with historic references. The whole idea was to illustrate liberation, how women felt in corsets and crinoline, how they fought for their right to choose their undergarments, ones that wouldn’t harm their breathing.  I wanted to use water soluble fabric, so got in contact with designer Ziad Antoun, who kindly offered to donate this rare and innovative fabric for the performance. After this I got in contact with Lola Rosero. We both came up with the clever design together. The performance was the first in the history of the museum to take place inside the Madgeski Garden pond. This was a real honour. 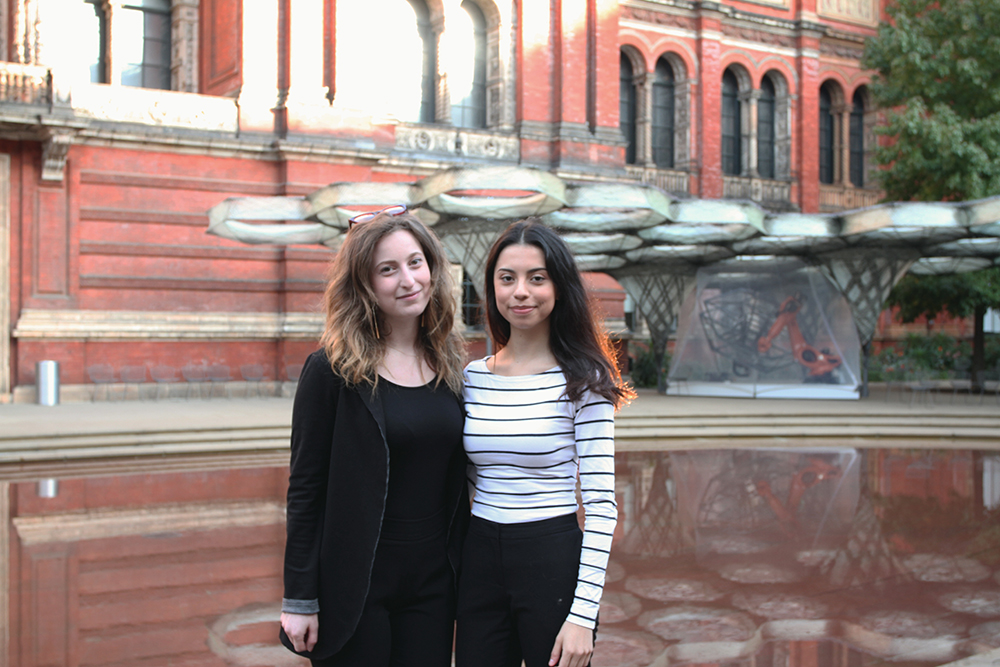 What did you create for the performance?

Araxie: I created a performance piece that highlights the journey women had to take, living a life that was full of constraint and pain. It maps the process of the struggle women had to go through to reach the freedom of movement they now have. Underwear plays a bigger role in our lives then we realise, it is what allows us to move freely and define our body shape. We are now allowed to decide whether we want to feel sexy, practical or comfortable. That wasn’t a luxury women had for large periods of history.

Aaron: Flora Grant and I created a movement based on the brief Araxie gave us. The movement included motifs that depicts a man’s control over a woman. Breathlessness, rebellion and freedom were aspects that we incorporated into the choreography. The movement was vast and direct as to convey a narrative in a short space of time.

So the performance was recorded and will be advertised at Kings Cross, how does that make you feel?

Araxie: I am very thankful and overwhelmed that I’m able to look back at it with others. I am very excited to have this piece exhibited to such a wide and international audience.

Lola: The fact that my garments will be projected at Kings Cross feels like a blessing, especially to my friends work. It truly shows how UAL enables creatives connect throughout different platforms and mediums.

Aaron: Knowing that the performance will be advertised at Kings Cross Station is huge for me. Having something that I had a part in creating being so easily accessible to the public blows my mind. 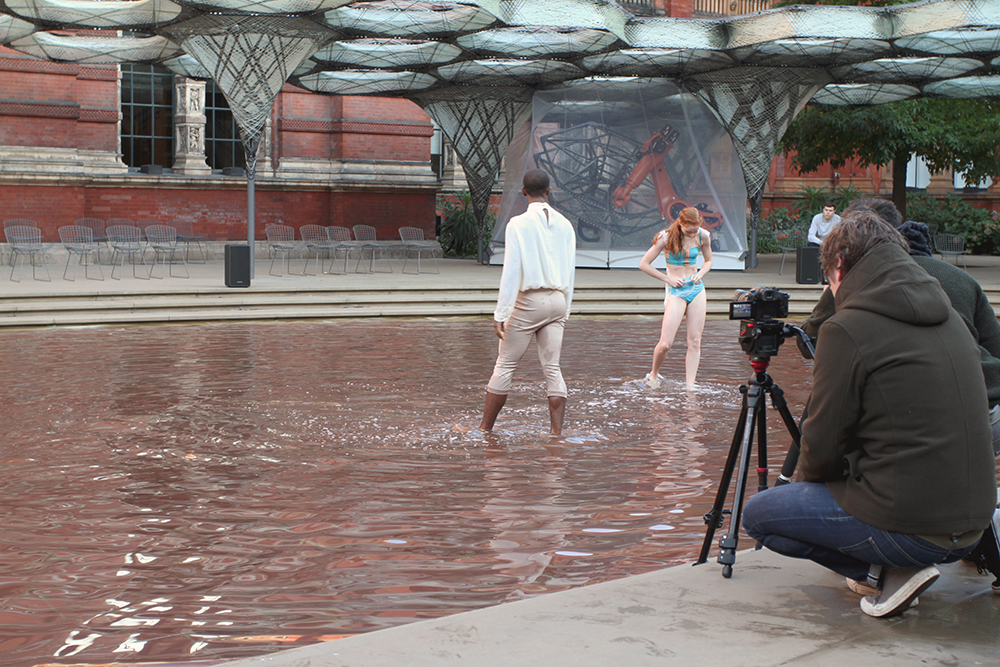 Aaron Chaplin and Flora Grant from Trinity Laban were enrolled for the live performance at the Madgeski Garden Pond.

How did the performance illustrate the V&A exhibition?

Araxie: The purpose and the goal wasn’t about the design of the garment but rather what it stands for. The design is a simple reinterpretation of historical underwear from the 1800s. The water soluble piece is what ties the performance and the concept together. When the dancer fell into the water and the dress melted away, it marked the transition period from the struggle women had to freedom. I am lucky to have a pattern cutter who was able to handle such a difficult and sensitive fabric.

Lola: The garments can reflect the V&A exhibition as well as Araxie’s installation because of the way the male dancer is less constrictive compared to the female dancer. As the performance evolves, the dress dissolves in a way which represents the transition of women and how now we have more freedom in every aspect than before.