One in four people in the UK will experience a mental health problem each year and if you’re working in creative job, you’re 25 per cent more likely to. The Mental Health Foundation highlight the fact that if we don’t act urgently, by 2030 depression will be the leading illness globally.

Against this backdrop, to mark World Mental Health Day 2016 on October 10, an audience gathered at London College of Fashion to to better understand the state of the creative industries from a mental health perspective, and suggest potential solutions, at a panel event entitled “Mental Health Issues in the Creative Industries.” Sponsored by the British Psychological Society, the event was chaired by Dr Carolyn Mair, CPsychol AFBPsS and MSc Applied Psychology in Fashion and MA in Psychology for Fashion Professionals course leader.

The scene was set with examples that highlight the prevalence and complexities of mental health in the industry; from model Kate Moss’ negative experience of having to undertake adult work as a minor that she didn’t feel equipped to do, to the loss of designer Alexander McQueen as a result of mental health issues and John Galliano’s mental health breakdown a few years ago.

Panellist Rosie Nelson, a British model and activist for better healthcare in the modelling industry, cherted her journey in the world of modelling. Earlier in her career, Nelson, was asked to lose weight and slim “down to the bone” by an agency – an event she described that resulted in stripping away her self esteem, and further cemented the widespread pressure of models to stay thin.

Compounding this view Caryn Franklin, MBE, Professor of Diversity in Fashion, Kingston University, highlighted that over the last 10 to 15 years, the average height of models has increased from  5”9 to 5”11, however the fashion sample size has still remained the same, thus the pressure to meet the “normalised ideal” as Franklin called it, is ever more pressured. She also however noted that it stimulates the need for a louder conversation to be ignited in this area.

Franklin focused on the power that those in the fashion and creative industries have, as they are in the “best place to agitate for reform because they know the complexities of it”. This gives a sense of hope and empowerment to the industry, to shift the dial on the negative perceptions and experiences.

A point that Dr Mair supported, was that while it may seem that the creative industries are synonymous with mental ill-being, it is important to acknowledge the ability of fashion to act as a vehicle for well-being. Dr Mair highlighted that we all wear clothes every day, and they can also be a source of feeling good, the power of which should not be undermined. 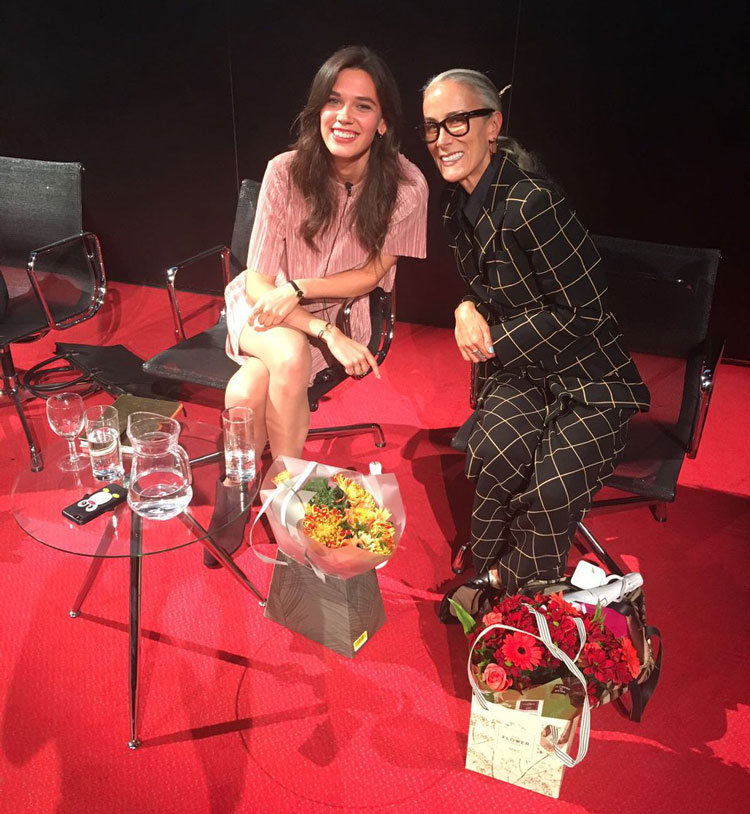 Panellist Dr Annmarie Rankin a Clinical Psychologist, was quick to note that the industry and a person’s job are just one part of a mental health diagnosis – one cannot pathologise. She drew on her experience both as a psychologist and as a former dancer in the Royal Ballet, stressing the importance of screening for mental health issues for those in the “middle ground” – those who are not seeking help. In in an industry that is so focused on perfection, she welcomed the attention that the field of psychology is placing on exploring the perfection phenomena in all its forms, and she called for enhanced awareness and education in this area.

In seeking out treatment options, Dr David O’Flynn a Consultant Psychiatrist, highlighted the power of art therapy. Dr O’Flynn is also Patron of Raw Material Music & Media, Co-Founder/Director of Innovations in Investigating Mental Health Population Outcomes (IIMHPO) and Trustee/Company Director of the Bethlem Gallery, which investigates and facilitates the use of art therapies to enhance mental health.

Dr O’Flynn highlighted the power of having a constructive, destigmatising and cathartic release through music creation and art for patients he treats who have psychosis. He said that it was particularly useful for the male patients he treats, in a masculine culture which doesn’t necessarily allow for open discussion of such mental health challenges.

Similarly, Franklin highlighted that initiatives such as the Model Sanctuary set up by model Erin O’Connor, offering nutritional, relaxation and counselling support for models during London Fashion Week, have forged a path to address the potential mental issues models specifically may face, which has subsequently been rolled out in other cities with the support of the British Fashion Council.

The panel discussion sparked a raft of questions from the audience but one that was of particular note was, “What can be done to address the stigma of mental health issues?”

It was a rather poignant way to end an event on World Mental Health day, as it evoked a unanimous response from the panel that highlighted the power of consumer in igniting change around the stigma of mental health issues. While Dr O’ Flynn acknowledged that we have “come along way”,  he noted “there is still a lot to be done, we all have a role to play, as stigma is a social concept and we all have a role in diminishing its effect” and having louder conversations to draw awareness to mental health in its widest sense.

Nelson has taken this idea of raising the volume on mental health issues in the fashion industry to the highest echelons – UK parliament – to call for better healthcare in the modelling industry with her petition on change.org, a petition that is gathering strong momentum and raising awareness globally.

Franklin highlighted that all of those in the creative system have the ability to embolden, recognise uniqueness and show the beauty of great design. She noted that “we are all in a space where we don’t see any of our characteristics being delivered” and this can have an impact on mental health. Stating that “skeletal is not part of the art form” and that as such she encouraged the audience to speak out and “challenge if it doesn’t feel right”, commenting that there is always room for more diversity in the fashion industry.

The thought provoking event brought to the fore the on-going mental health challenges that exist in the creative industries, particularly that of the fashion industry; not least because, by its nature it is a complex, fast paced, pressurised one, however the discussion also posed suggestions for change and enhancement. The event also actioned the views of Professor Peter Kinderman, President of the British Psychological Society, who described World Mental Health day as “an opportunity for us all to remember the vital importance of our psychological wellbeing”. By having the conversation and drawing attention to this area at the London College of Fashion, in a live forum, it brought this opportunity to life and held a mirror up to the audience asking them to challenge the status quo and play a role in reducing the stigma surrounding mental illness going forward.

This article was originally published on The Psychologist website.