Where art and science converge: Exposing malaria through costume for performance

LCF News caught up with 2014 graduate, Katie-May Boyd, BA (Hons) Costume for Performance, after discovering her intriguing costumes at the BA14 Performance Exhibition. If you are looking for art that explores scientific fact in an intriguing way, her costumes are it.

LCF News: Tells us about your final project – what did you set out to achieve?

Katie: The project illustrates the microscopic relationship between Malaria and its Human host in two costumes that focus on different stages in the life cycle of the disease. The costumes and performance aim to teach about malaria in an alternative way and also to highlight the cross fertilisation between Art and Science.

LCF News: And we hear that you really have taken the work into the scientific realm; speaking at the Wellcome Trust?

KMB: Yes, I took my work to the yearly conference of the ‘Wellcome Trust Centre of Molecular Parasitology’ (WTCMP) whose scientists I had collaborated with during the project. This was a really interesting experience for me as I presented my work to 80 parasitologists who had a completely different stand point from anyone else I had shown the project to. Their feedback was really helpful and a few people were keen to collaborate on different parasites as well!

LCF News: What inspires you about the work you do?

KMB: I love creating things, I think the moment a 2D pattern transforms into a 3D object on the body is just sublime. Working with science and art, the thing that I get most out of it is translating something that is very factual and theoretical into a tangible and visual piece that changes the way you understand a thing.

Looking at Katie’s work, you can certainly see how a complex scientific story is brought to life with vivid visual detail. Her costumes take the viewer from the initial stages of the virus to the moment when it overcomes the host’s body. 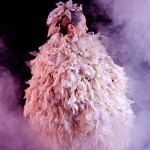 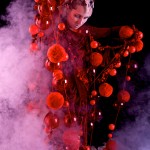 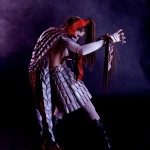 With such a unique take on costume, art and science, we wondered why Katie was drawn to study BA (Hons) Costume for Performance and whether the course resonated with her experimental take on things. Katie told us:

I was drawn to the course because of the prestige of the college and once I found out more about it I thought it was much better than the courses offered by different universities because it seemed to be a lot more creative and open – more cutting edge and experimental as opposed to some that were a lot more traditional and theatre based.

Katie has since found herself interviewed by Scottish TV and has already taken internships with Alice Temperley, Madame Tussauds and the Royal Opera House. We’ll be intrigued to see where her insightful mixture of art and science turns up next.