The Westminster Library Archive: An Opportunity to Index British Vogue

The Westminster Library Archive: An Opportunity to Index British Vogue

This is part 2 of a two-part story on the indexing British Vogue Magazine 1939 project.

Claire Mosley and Sofia Neri are first year MA Fashion Curation Students at London College of Fashion. Their indexing project was undertaken through the Collaborative Challenge Unit on the MA Fashion Curation course, in partnership with the Westminster Reference Library. The other LCF MA student contributors to our group project included Brenna Maginness, Emeline Taverne and Daisy Wright.

As part of the London College of Fashion’s (LCF) MA programme, students participate in a unit called Collaborative Challenge. All MA students across LCF courses take part in a wide array of projects which allow them the opportunity to work with peers from a variety of disciplines within the university. The Westminster Reference Library Index Project is a particularly interesting one for aspiring curators, as indexing is a vital component to the archival skills of fashion curation. For this year’s ongoing archival challenge, the Westminster Reference Library has offered its entire collection of British Vogues from its first publication to the present day to be archived by LCF students for the use of the general public, academics and curators.

In the second year of LCF running this challenge, two groups of students each received six months of 1939 British Vogues to index. The editions have provided a fascinating look into the day-to-day preoccupations of fashionable women in the months building up to the start of the Second World War. The editorial content of British Vogue, in illustrations and text, advertising and classifieds, evoked an illuminating viewpoint of the no-nonsense mindset of the era. It also highlighted the vacillations between day-to-day preparations for another war and a sense of denial of the impending catastrophe.

The brief for Group Two was to index British Vogue from July to December of 1939, and then showcase discoveries that could be utilised by the library to promote its rich archival material. The Covid-19 lockdown, however, created unforeseen hurdles. There was no in-person access to the Westminster Library nor to other Vogue issues except for those assigned to the group. As LCF was closed, access to technical and software assistance was also limited, resulting in reduced design options. 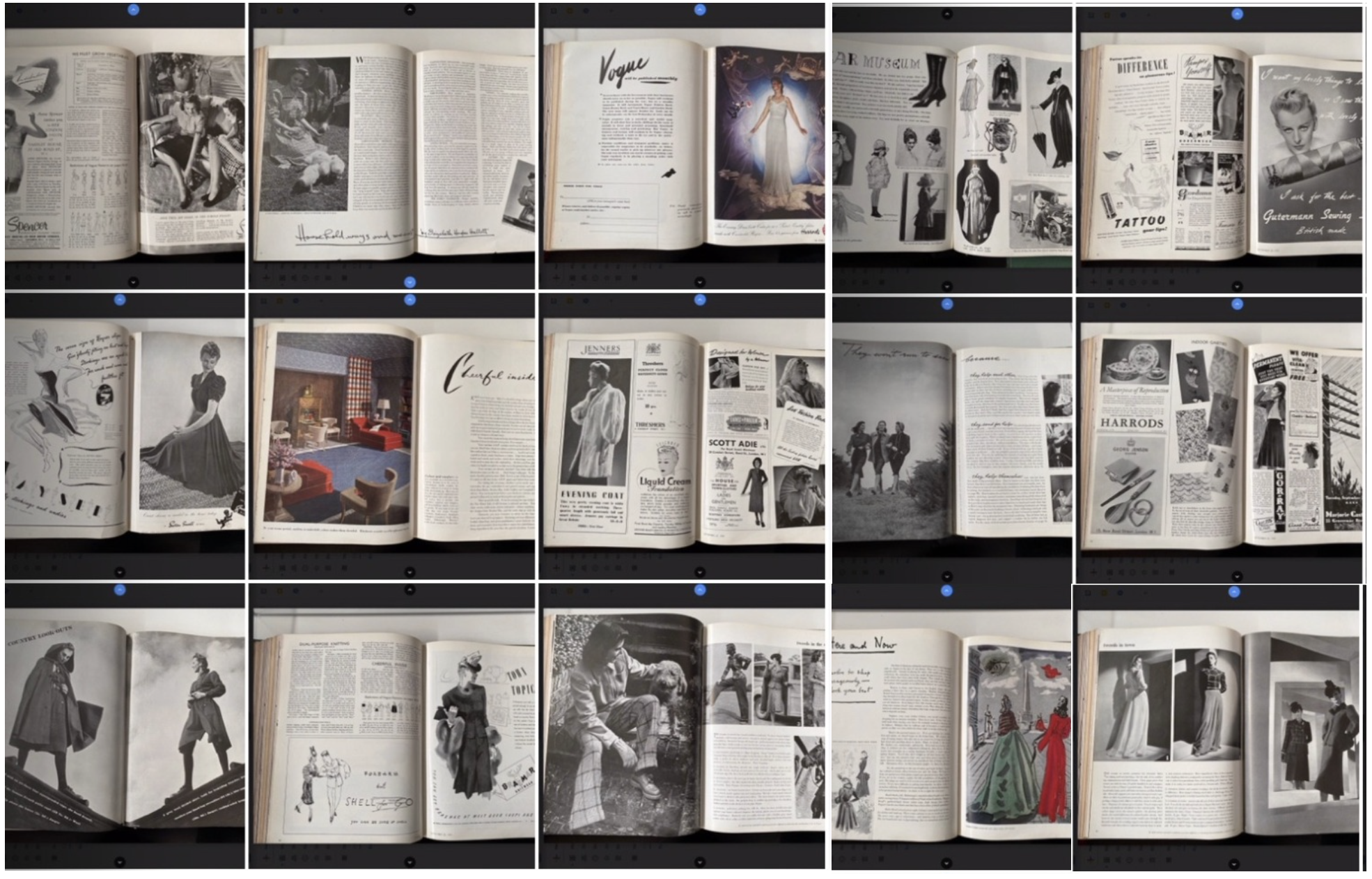 A Sampling of Original Source Materials of 1939 British Vogue

The concept of making ‘zine posters has provided an opportunity to implement what cognitive scientist Barbara Hayes-Roth refers to as ‘opportunistic planning’ (Sawyer, 2008, p.169). In the case of the indexing project, this involved finding a format that allowed for flexibility in displaying the research with enough range for it to be modifiable within the ever-shifting situations created by Covid-19. The concept of a ‘zine poster offered the perfect chance to employ Hayes-Roth’s tenet around the Covid obstacles, in addition to providing a format that could serve many functions for the Westminster Reference Library. The ‘zine posters could be printed and displayed as promotional material within the library, whilst utilised digitally on social media platforms linked to the library to generate interest in it and the Vogue archive.

While Hayes-Roth provides a paradigm to use for the ‘zine’s visual format, the content is best defined by media scholar Henry Jenkins in his seminal treatise Transmedia Storytelling (2003). Jenkin’s theory has been co-opted across many marketing strategies, and is best conveyed through his principle that all narrative content and its presentation be fluid. He contends that content must be available and transformable across multiple delivery channels and platforms in order to develop a cohesive, unified experience - a “world view”. Moreover, Jenkins’s art of world-making is precisely what enhances the overall unity of the ‘zine content. His premise is useful when trying to create a narrative out of a variety of themes that is sustainably whole, remarking that ‘the movement of content across media’ is ‘an enhancement of the creative process’ (2003).By applying both Hayes-Roth and Jenkins simultaneously, the British Vogue project took on a sense of clarity and continuity in both format and content.

With the overall concept and theme determined, each member of the group picked a topic that held a particular resonance for them, which could be further researched using the available British Vogues. To unify the varying content aesthetically, the group chose the September 1939 cover as a template and cohesive frame. September was the month war was declared; thus, this particular Vogue cover was notable and important. Its curves were  versatile enough to be easily modified into five distinct colourways and a plethora of graphics that add a hint of modernity.

The ‘zine posters, showcased below with short passages from each student within the group, reveal the thinking and interests behind their topic choices. They also embody the theories of Hayes-Roth and Jenkins which are equally applicable to the ongoing quest for a coherent look and story in each ‘zine.

How Do 1930's Advertisers Speak of and to Women?

Indexing British Vogue presented the opportunity to analyse the ways women were depicted in its pages as mere consumers and objects. This approach allowed for primary research in gender studies and the exploration of women's representation in fashion. The language of the 1930's fashion ads is outdated compared to the vernacular of our time. It proved thought-provoking as well as relatable in terms of contemporaneous marketing, with ads promising clear skin, youth, perfect hair, hairlessness and corset support. My These posters could then pose the question - how do 1930's advertisers speak of and to women?

This is a complicated question. In one breath, an ad professes the necessity for a perfectly slim figure, and in the next calls for the wartime woman to be a versatile heroine. When spread throughout a 50 page magazine, these remarks on women seem inconsistent and seemingly inconsequential, but it is compelling to unify them within a single theme and thus view them as a whole. The ads are not arbitrary. Through researching this project, the prevailing sense in 1930s British Vogue conveys both familiarity and progress within the modern sensibility.

The Language and Wit of 1930's British Vogue

The art historian Jules Prown posits in his article Style as Evidence (1980, p.208) that one can use simple artifacts to grasp the implication of both minor and major historical events and in this way come to “a different kind of cultural understanding.” Through the lens of Prown’s theory, one is especially struck by the powerful experience of reading about the Second World War in a fashion journal. In fact, British Vogue achieved something that films, books and oral histories do not often convey. The magazines transmit a different understanding of the preoccupations and interests of a varied socio-economic section of urban fashion-conscious women of the time and employs an idiosyncratic use of language which became interesting to highlight.

Particularly revelatory was the realisation that the assertions and wit of the era were not limited to the novels of P. G. Wodehouse but were part of the vernacular of the time. On close examination of the text, the famous British “stiff upper lip” in fact consisted of bravery, practicality and humour in a time of adversity. The editorial emphasis of British Vogue in this period reflected this mentality, suggesting that women be well turned out to boost morale for the soldiers and the public, with a no nonsense and practical attitude couched in the language of verve, wit and ingenuity. The texture of this historical moment through the magazine’s rhetoric was to provide glamour, service, good cheer and humour at all times—perhaps a lesson of resilience with style for our times.

Vogue Patterns was a way for women to aspire to the fashionable clothing of the era, either through making the clothes themselves or by availing the services of a dressmaker. They have become a rich area of inspiration for costumiers and frequently used to create authentic fitting clothes for period dress. For those with a background in historical costuming and an interest in the 1930’s, this project was a way to observe in detail the choices that would have been available to women of the era. Vogue Patterns is an excellent primary source of inspiration for the cut of clothing from 1939, with its styling and type of fabrics utilised in an epoch so thoroughly documented in art and culture.

Of particular interest in the fashion magazines indexed is the dictatorial tone of how women should dress. The British Vogues from the 1930's give a very specific dress code for each situation a woman finds herself in. To discover the contradictory way lingerie was represented and described by the British Vogue was revelatory: sometimes conservative and at other times cheeky and provocative.

The aim of showcasing the dress code in this poster was not only to punctuate the style portrayed in the magazines but also to bring the audience's attention to the unexpected yet relevant descriptions of each outfit. These iconic looks accompanied by striking quotes is what defined British Vogue of the era and legitimised its authority in the way women dress.

Given the many restrictions of the pandemic, the prevalence of the theme of travel and worldwide influences in British Vogue right up to the advent of war was especially interesting. Arm-chair travelling back in time with British Vogue allowed for freedom to explore the world with one’s mind.

Globalisation was well underway by the 1930's; advances in technology had accelerated communication and the dissemination of information. Moreover, from a fashion point of view, globalisation hastened the spread of trends and knowledge of designers from around the world. Desire and curiosity to travel rapidly increased with each new advance in technology and industry.

British Vogue of 1939 presented and advertised international places, cities and hotels as a way to entice readers to travel. Sometimes it offered a complete travelogue, with suggestions of all kinds, allowing the reader to plan a whole new kind of itinerary, modern in its variety, ethos and scope.

The Westminster Library is in the unique position of possessing every issue of British Vogue from its inception in September 1916 to the present day. It is a resource of invaluable cultural and fashion history. Once all the British Vogues are indexed, the magazines will efficiently provide a unique trove for scholars, social anthropologists and interested public, through their myriad articles, classifieds, illustrations and photographs, making it a rich catalogue of a wide range of topics. This incredible resource in the heart of central London is freely accessible to the public.