The Fashion Space Gallery has curated the Polyphonic Playground LAB, an interactive series of events during London Design Festival that sees NTS Radio join them for music, and Studio Studio PSK for musical installations.

The LAB series is currently open and running until the 27 September 2015, at LCF’s Mare Street campus in Hackney. The series is inspired by the inherent joy of using playgrounds as a child, this installation encourages adults to re-discover this experience of play. Taking the archetypal elements of a playground – swings, slides, climbing frame – and combining them with the musical mastery of a selection of musicians, a landscape of playground activities are transformed into musical instruments when used. There will also be a timber framework, creating the iconic playground pieces at adult scale. Combining these with custom electronics, woven electronic textile and BARE conductive paint, each object gains another level of interactivity.

During this series of LAB events, a selection of musicians including Reeps One, Gum Takes Tooth, Broken Note, Linden Jay and Kito carefully curated by NTS Radio, will explore the structure as an instrument through experimentation and rehearsals in front of a live audience. The LAB will allow the musicians to familiarise themselves with the installation and how best to utilise it in live performance. The culmination of the experiments will be showcased as a series of live concerts later in the year.

We caught up with Ligaya Salazar, Director and Curator of The Fashion Space Gallery to discuss the series.

Why was the Mare Street campus chosen?

Polyphonic Playground was commissioned in 2014 by the Fashion Space Gallery to encourage cross-disciplinary practice. It launched during Art Basel in Miami in December 2014 and was shown during the Salone del Milano at Ventura Lambrate, which shows crossovers between design and fields of science and pioneering design–fashion/couture hybrids in April 2015. The intention was always to show it in London and when NTS Radio approached us about an experimental collaboration with them, it seemed like the right partnership to do this with. The installation at Mare Street campus is an opportunity for chosen musicians to experiment with the piece with a view to performing with it at a gig in early 2016. Showing it within the college environment in the high-ceiling canteen building of the Mare Street campus made sense visually, acoustically and conceptually.

How was the concept of the playground LAB developed, what inspired the inherent joy of using playgrounds as a child?

Polyphonic Playground brought together speculative design practice Studio PSK, musician Reeps One and in its early stages, Laura Bell, Course Fashion textiles to think about a project we could work on collaboratively. Very early on the idea of playfulness and interactivity was discussed and consequently Studio PSK developed the idea of an abstracted playground that could be used as an instrument. 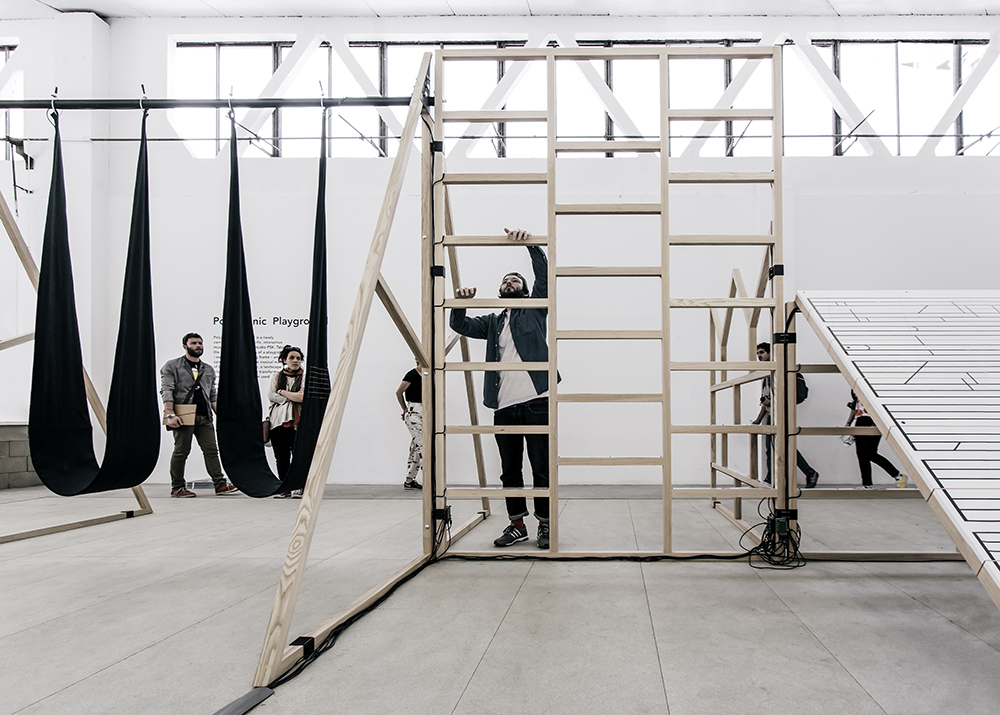 The Polyphonic Playground LAB will be at our Mare Street site until the 27 September 2015, it’s previously appeared in Miami and Milan.

What will NTS and Studio PSK bring to the series?

​NTS have come on board to help select musicians who would transform the installation, which has so far only been used in a public environment, into something that could actually function as an experimental instrument.

A digital responsive iteration of the project will also be developed during the LAB, in collaboration with Creative Technologists. The digital interpretation will focus on exploring and engaging with the thriving online NTS Radio community. The Polyphonic Playground LAB has previously appeared at Assemble Miami, 6-7 December 2014, and Ventura Lambrate Milan, 14-19 April 2015.