London Fashion Week was brimming with the talented design alumni of London College of Fashion, from catwalk shows in the main tent at Somerset House, to presentations and showroom displays. LCF alumni were also well represented at the prestigious off-schedule platform Fashion Scout, which has become as much a part of the London shows as the British Fashion Council’s official schedule.

Of course, LCF alumni also fill the front rows as journalists and buyers, the backstage area as stylists, hair and make-up artists and man the doors as PR agents, as well as those behind the scenes in the design studios, working as pattern cutters, marketing managers and more, but here is a quick round-up of the designers whose names appear on those coveted invites.

Another menswear graduate, and one of the most feted young British designers in recent years, JW Anderson showed his first full womenswear collection since luxury conglomerate LVMH bought a minority stake in his company and installed him as creative director of Spanish leather brand Loewe last September. The collection of sculptural separates in unexpected proportions and fabrics – corduroy and de-embossed leather – was yet another smash hit.

Hemyca designers Helen Clinch and Myra Nigris met whilst studying at LCF. They showed a collection of midnight blue, pitch black and oyster eveningwear and a campaign film as part of the BFC’s Digital Showcase.

Ming Pin Tien graduated from MA Womenswear in 2012, showing his first collection at Fashion Scout and winning a slot in the coveted Ones to Watch showcase. He showed the AW14 Ming collection as part of the designer showrooms at Somerset House.

JENA.THEO‘s Jenny Holmes and Dimitris Theocharidis met at LCF in 2002 and have recently added artist O.Two (James Carey) to their design team, adding surface detail in print and hand-painted fabrics. They showed their collection of black acid wash denim with glossy gold accents in the designer showrooms.

Milliner Mich Dulce also took a series of short courses at LCF. She showed raffia caps and headpieces as part of the Estethica showcase to promote sustainable fashion.

Alice Cicolini presented her collection of Indian-inspired jewellery as part of the Rock Vault initiative, and Ekaterina Demidova’s label WRQ.E.D showed illustrated silk scarves, each with a border of poetry.

Merit Award winner Xiao Li studied MA Womenswear at LCF before completing her masters at the RCA. She showed a collection of cotton, mesh and rubber in crisp white and shades of blue, embelished through her innovative technique of moulding rubber to resemble oversized studs and chains. Xiao Li will travel to the Fashion Scout showcase in Paris, alongside three other LCF alumna, Aether Studios (Neliana Fuenmayor and Paula Maso) and Julia D’Albert, who studied tailoring.

Part of last year’s Ones to Watch showcase, Renli Su is a recent graduate of MA Womenswear. Her collection for AW14 is oversized but elegant, in natural colours of Indian handmade organic linen and a wool / linen blend from Ireland.

Lulu Liu‘s graduate collection was part of the Future Map selection at UAL and she has shown her bright, often exaggerated silhouettes at Fashion Scout for six seasons. 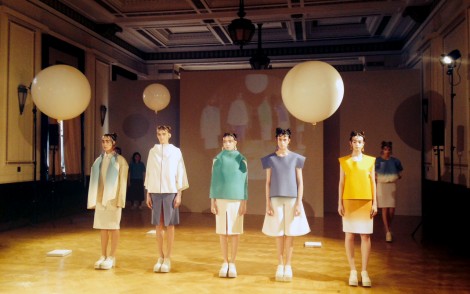 Min Wu graduated just last year from MA Womenswear, exhibiting her work in a static showcase last season but taking her sculptural designs to the Fashion Scout catwalk for AW14.

BasharatyanV by Veronica Basharatyan studied economics in Moscow, before coming to London to study fashion promotion at CSM and then Surface Textiles at LCF. She showed a sporty collecion in grey with neon yellow accents.