Our Student Spotlight series highlights achievements and news from current students here at London College of Fashion. We spoke to Santana Queirós from BA (Hons) Fashion Design and Development about her brand NARCISSISM, her experiences on the course and what she's working on during her gap year.

Can you tell us a little bit about yourself?

I’m a Portuguese fashion and costume designer but I’ve been living in London for the past three years in order to pursue my ideal market and study at LCF. I’m currently splitting my time between my own personal brand and offering styling for a retail brand, while being open to custom-made commissions whenever I have the time to invest in it.

Why did you choose to study BA (Hons) Fashion Design and Development?

My personal style as a designer was always focused on gender-bending to the point of being conceptually genderless, so when I applied for LCF it only made sense to pursue Fashion Design and Development because I could focus on both normative genders or none.

What's it like to be a fashion student at LCF?

Very stressful and challenging. It was not as hard for me in the beginning as it was for some friends of mine because I started the course with a few scraps of what my “brand” is today. I was already selling and creating garments on my own and I felt the pressure of always having to go the extra mile and do more than asked, or so I thought, so I spent a few sleepless nights when I probably could have taken one or two naps. It was great nonetheless, it made me grow a lot as an individual and a creative.

How has BA Fashion Design and Development helped you express yourself creatively?

The course helped me better understand who I was as a creative and the direction I needed to follow to achieve what I currently embody.

Before I started I was willing to do everything, from jeanswear to couture, to even babywear. However, during the projects I started noticing my personal identity in each challenge, and the connection between each of the collections, even with all the different specifications and targets. The teachers also noticed my signature traits and helped me develop them over time.

What inspired your brand NARCISSISM?

I was always the student who went the extra mile, even before LCF. In 2016 I graduated in Porto, Portugal as a Fashion Design Technician. The final assessment was to create a conceptual collection and produce two looks to present to a jury panel of both professors and designers. I ended up being that annoying show-off student who produced the full 8-look collection and released an online brand in the same day. NARCISSISM came up as a joke masked as a confrontation, when my design teacher called my clothes “narcissistic” because I wanted to create some sort of heavy metal merch-inspired garments (and I did).

Can you tell us a bit about the concept for Yours Cruelly?

Yours Cruelly was something that I eventually knew I was going to do sooner or later because I spent most of my childhood designing bridal dresses. It can be seen as an alternative bridal collection. I created a full concept not only surrounding the bride but everyone attending the ceremony – the groom, the priest, the bridesmaid... The full leopard-print looks came up while I was doing an internship for Preen by Thorton Bregazzi and in one of the conversations during lunch time with the team I sort of said I would only marry if my dress was in leopard print. I guess it just made sense – it was something nobody ever thought about before. 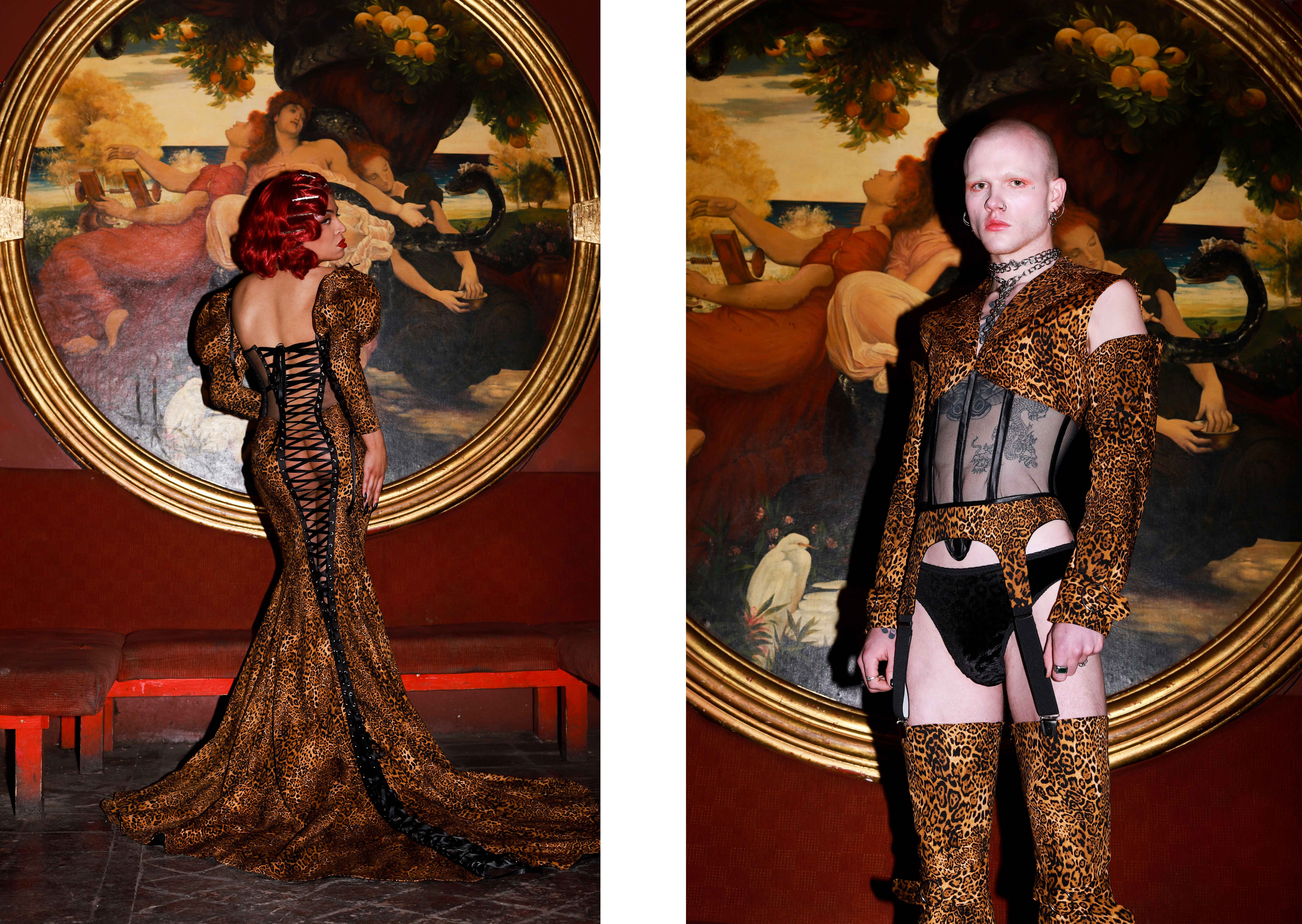 What’s been your favourite project to work on so far?

If I exclude the latest one, I would have to say the first one I released when I moved to London, called Adam’s Apple, which was actually a collection I created for my first year industry project at LCF. I ended up liking the final product so much that I reclaimed it for myself and teamed up with some queer creatives and models to embody the same characters.

I’ve been recently realising that all of my current projects are inspired by some sort of romantic relationship or love-like theme, so this new project will also be about a couple (it’s still a surprise!). I’m trying to mix my signature corsetry, with western vibes, fetish-wear... I’m really excited! I am also still working on commissions for a few important people in the queer community, so 2020 looks quite promising!

You'll be returning to LCF for your final year in September - what are you most looking forward to?

I've been preparing my final fashion show since my first year, so I'm really excited about actually starting the production of it. Three years have passed since I gathered the initial concept and I still love all the references and the history behind it, so I'm taking it as a sign that it's the right time to finally translate it into clothes! I wanna finish it with a BANG and a surprise everyone!

What advice would you offer to aspiring fashion students?

I guess I would tell them to always aspire for more.

Tiredness and frustration are natural but can be easily beaten when there's conviction and willingness to win. You need to feel that you were born for this and there’s no option B, so it really has to work for you.