A Tetris-inspired takeover of a Whistles store was the outcome of a recent collaboration between the British retailer and BA (Hons) Fashion Styling and Production students. 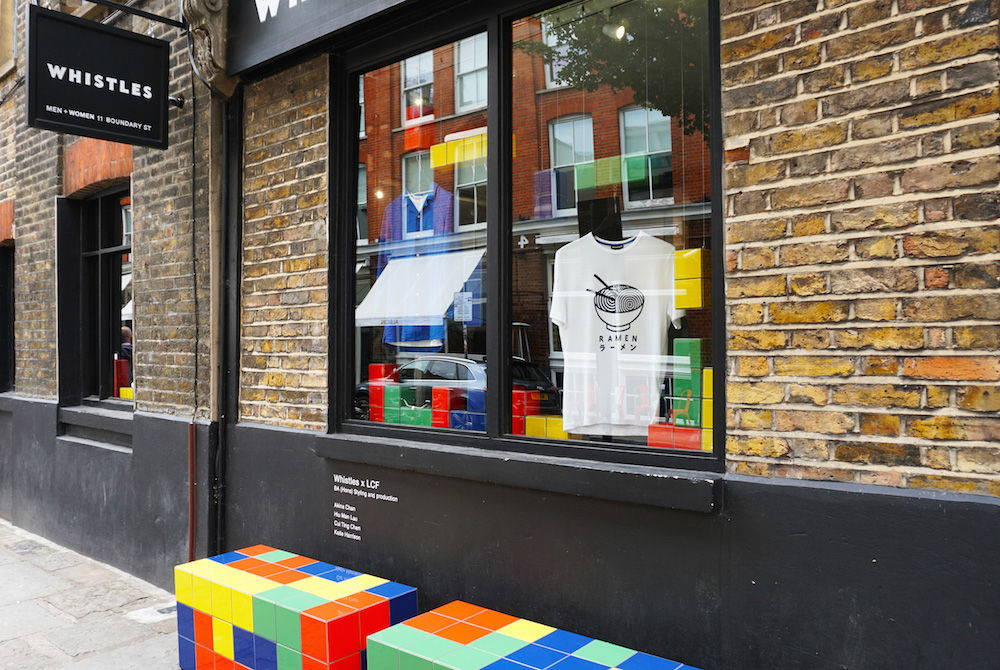 Over a dozen students groups worked with Whistles team, which comprised Head of Creative Kate Cannon, Creative Visual Manager Hollie Goddard, and Creative Visual Merchandiser Kathryn Sellers, on this window installation project that took over their Boundary Street menswear store. The Shoreditch store winning team was made up of Akina Chan, Hiu Man Lau, Cui Ting Chen, and Katie Harrison, who said this about their design inspirations:

Inspired by the old brickwork at the Boundary Street Whistles store, we developed our Tetris display. With current trends in nostalgia marketing, we aimed to connect with our Whistles costumer in a way everyone can relate to. With the use of bright pastel colours inspired by Guillermo Mora and splashes of orange from the season’s collection, it will produce an eye-catching window display. 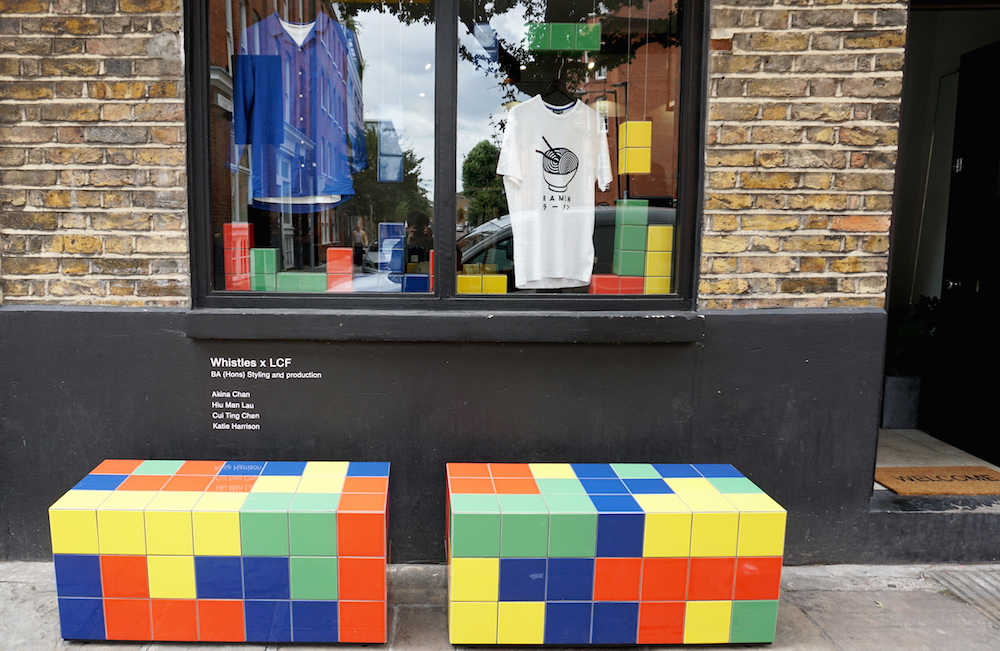 The installation was visible for five weeks to showcase their Spring/Summer Menswear collection and become a talking point of the street. The tile-matching puzzle video game takeover became an Instragramable hotspot and helped drive traffic to Whistles along the way. LCF staff from BA (Hons) Fashion Styling and Production involved were course leader Clare Buckley, associate lecturer Thomas Murphy, and guest lecturer Emma Macfarlane. Clare Buckley spoke to us after the installation was complete. She told us:

Styling and Production has collaborated for the second year in a row with the Head of Creative Kate Cannon and her team at Whistles. The project helps to define the possibilities of styling in production against creative platforms and allows students to showcase their work to the public. Whistles produce the winning conceptual designs, which regards the students with their own public facing platform showcasing the Whistles shops and design. The success of the project relies on the students’ process driven outcomes, tests and experimentation within the style lab masterclass workshops during their first year where they responding to an industry brief set by Whistles. The students were encouraged to experiment with materials, installation ideas, styling tests, 3D material manipulation, drawing and how to create mood and atmosphere through window design. Like any industry project, they were asked to consider brand guidelines and brand philosophy throughout the collaboration.

We spoke to Akina Chan, who worked on the winning idea for the collaboration. She told us:

Working on an industry brief with Whistles was an eye-opening experience. Since we wanted to tell a creative story while working within the context of the brand and the restrictions of the actual window space, it was an effort in juggling creativity versus practicality. I actually went to see the display in person recently and it still amazes me that something we thought up is on display in real life. The transitioning from the Tetris block seats outside the store to the ones in the windows, and then be placed inside the store was something articulated by the Whistles production team and gave so much more depth to the concept. It made me realise that even a simple idea could be made into an engaging process and I’m just so happy and thankful we were given the opportunity to experience this.

The window takeover started from early August and was visible to the public until the middle of September.