‘Smell the DJ’ at Arcade East

Having just gone through a pretty vigorous airport security check at Gatwick, I was completely shocked to see them selling hand grenades. It turned out to be a bottle of fragrance called Spicebomb by Viktor & Rolf. I was confused by what it was supposed to smell like: burned flesh? Gunpowder? It turns out there’s a theme in men’s fragrances around the glamourisation and fetishisation of violence. Matthew Herbert, 2017

This was the beginning of a collaboration between renowned music producer and DJ Matthew Herbert and students from LCF’s MSc Cosmetic Science. They worked on a project which explored masculine iconography surrounding both perfume and music, and this was performed at LCF’s new project space Arcade East, which launched at Mare Street as part of London Design Festival last week.

Students from MSc Cosmetic Science responded to sample tracks Matthew created inspired by mainstream perfumes such as Spicebomb, Azzaro’s Wanted and Trump’s Success. The students Irmak Atabek, Roberta Ion, Grace Lee, Natasha Malhi and Phoebe Tan, under the supervision of Dr Milica Stević and perfumer Marianne Martin, then created their own scents with more unusual, slightly off-putting notes such as cigarette smoke, sweat and stale beer. At Matthew’s live DJ performance these were emitted into the space for visitors to immerse themselves in the nightclub atmosphere.

The biggest challenge was to make something as intangible as scent match sound. The fragrances had to tell a story and that story had to be the same as Matthew’s concept. The feedback we were given by Matthew, and also by Marianne, Milica and Polona helped us stay on track. Good communication was the key to getting this project done.

My fragrance was inspired by Matthew’s track, Forbidden. I created an impression of the Iris flower, which has a dark and deep smell that fills a whole room in seconds. The flower is associated with death in my culture, being forbidden to touch. Also, the scent is sharp to relate to the sharp sounds Matthew created by literally breaking perfume bottles. 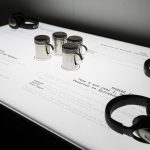 All images by Katy Davies 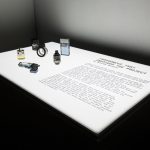 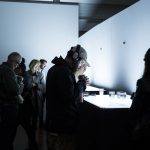 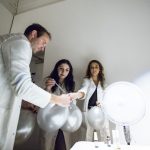 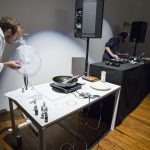 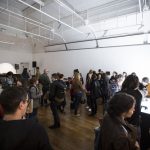 Whenever I listened to the piece of music I worked on, the image of primitive men and women dancing around a big fire in the forest came to my mind and I wanted to create a scent which captured that moment. As a result, the final scent I have created was a very smoky and woody masculine fragrance with sweet and animal undertones.

The smell of music is an unusual concept for someone who has not thought about it before, but I have had this idea about combining music and fragrance long before I found out about this project which is why I was extremely excited to be a part of it. As someone who is very into perfumery, I can say it was challenging at times, but most importantly it was very creative and by far the most enjoyable project I have worked on.

All images are by Katy Davies.