On the occassion of the V&A’s exhibition, Alexander McQueen: Savage Beauty, LCF News spoke to Rob Phillips, Creative Director of LCF’s School of Design and Technology, about his experience of the iconic designer. 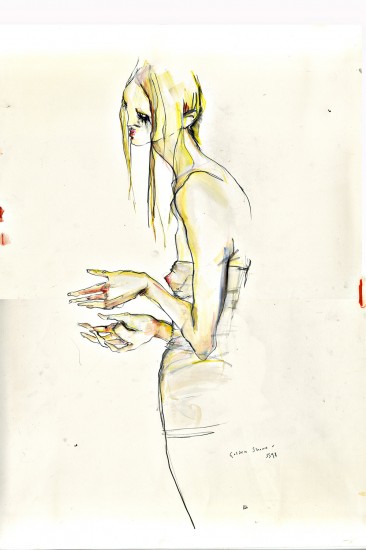 Last week, Rob told us how McQueen made an impact on him as an aspiring fashion designer. This week Rob tells us about his time as an intern in the creative whirlwind that was the McQueen studio.

In my first year second term of university I was asked if I could go and do an internship at McQueen whilst studying, because they wanted someone who could draw and sew. I felt this was way too challenging but could not resist the opportunity so I went for interview and I was working there the next day.

There’s very little I can legally say about my time at McQueen because of confidentiality agreements and my respect for internal privacy. However, on my first day I was like some ridiculous quivering wreck of a McQueen fan, totally in awe that I was in the studios where so many amazing things had been created. It was pretty magical to be in those studios.

From day one, I was busy and the workload didn’t ease throughout my time there. I used every skill I had and learnt even more. It was an intense high stress environment, long hours and hellish amounts of work, but to be in a place where there was so much creativity, energy and love for McQueen, it was a privilege.

It was a strangely well-orchestrated yet at times freestyle operation. There was a story being told and every now and again McQueen would throw in a different line or a cliff-hanger. It was like being in a film where you don’t see the twist coming. I did a bit of everything while I was there, ran around London doing chores, I drew, designed, sewed, cut, shredded, sequinned, glittered, sprayed, laughed, cried and more.

At the time we were working on ‘What a Merry-Go-Round’. The studio walls were full of images that ranged from war uniforms, Edwardian and Victorian funeral wear, the history of clowns and more. We all worked round the clock creating a variety of things, some random, some used, some not. The process was about building and editing. Experiments could take days and end up in the bin in seconds. As line-ups were being produced and fittings took place the story became more finalised. But the collection was not over until it went on the catwalk. Changes would still be being made at the last minute, backstage.

McQueen had the dirtiest of all the laughs. He was a very veracious and comical character but you could see the cogs in his head turning as he thought and over-thought his plans. Seeing him in action cutting a one-shoulder coat was pretty phenomenal. He literally created this piece in 5 minutes, pattern perfect. He was absolute proof to any aspiring designer that regardless of the rhyme and reason, concept or theme, skill is your backbone and so utterly necessary to make your vision come alive. Without it you’re on the back foot, totally reliant on others understanding your vision to make it happen.

As his collections grew bigger and more professional and he became cooler, I felt the work lost its edge and moved away from what it originally stood for. This was bound to happen and it would be foolish for a designer to keep doing the same thing, but I have a very romantic view of what McQueen is and it’s hard to let that go.

By the time I left McQueen, I knew he stood for something profound that he symbolised through clothes, sound, styling, production etc. In my eyes he was a revolutionary, a role model, a visionary who actually evolved us, changed things, developed fashion and society.  He gave me hope that there was depth and meaning in fashion beyond what I was seeing on the surface. That emotion played a vital role in the creative process, just as it did in connecting to consumers and fans. McQueen taught me that you can create an image, not be created by it, and that you don’t need to play by the rules to reach success. On the contrary, McQueen proved that breaking the rules was the way forward.

Times have changed and so has fashion, and I don’t think I’ll see another McQueen in my lifetime, but what I do hope to witness is more people tuning into to their feelings and expressing them through design. It’s about what we personally stand for, rather than what’s cool or trendy.

That’s my McQueen’s. That how his work speaks to me, through my youth, right up to now. Never forget his importance. The reign of McQueen will be a long one.