In anticipation of the V&As new exhibition, Alexander McQueen: Savage Beauty, LCF News spoke to Rob Phillips, Creative Director of LCF’s School of Design and Technology, about what the designer means to him. 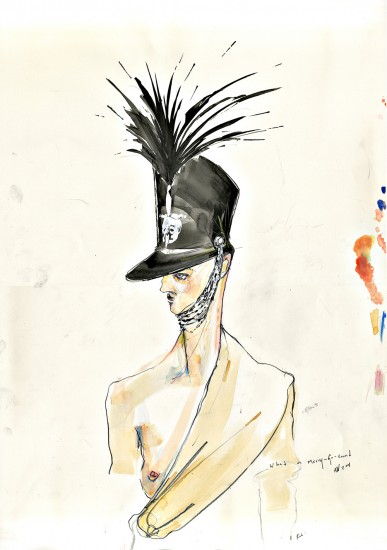 Illustration by Rob Phillips: What a Merry Go Round

In the first of two blog posts, Rob tells us about the impact McQueen had on him as a working class boy who was trying to find his way into fashion. Next week, we’ll find out about Rob’s time as an intern in McQueen’s studio.

I always felt the term ‘fashion’ was wasted on McQueen, he was far more than clothes and way bigger than fashion.

Back in 1995, the fashion scene seemed to have reached a plateau, much like today in my opinion. Everything was very similar, very constructed, polished and finished, as clothes tend to be when trend and commerce meet. Everything was glossy, airbrushed and about repeating a perfect image, whatever that is. Even the tail ends of grunge had been fashionably gloss coated. Yes there was the odd designer who challenged these norms but they were either too small to be written about or too quiet to get noticed.

Of course there are many ‘in the know’ fashion connoisseurs who did recognise other happenings in fashion but let’s think mainstream and in this instance I’ll talk from a very personal perspective: think working class boy, no money, growing up in the urban / suburban Midlands, in the pre-internet era. I had access to a littering of glossy magazines and the odd art book in the local library, but nothing deeper than that. I only found out about designers when they hit the front pages of my Dad’s Daily Mirror or appeared in editorials of Vogue or Marie Claire, which I would save my pocket money to buy. Beyond that it was hard to find and see fashion in my situation. It’s only when something big happened that you would know about it.

Society had constructed quite a specific image of beauty; clean skin, silky full hair, lean figure etc. This type of beauty has never really appealed to me and neither did it surround me. I have no shame or issue with saying that in my younger years I very much struggled with the way I looked, yet at the same time I had absolutely no relationship with or desire to be like images coming from the media. The idea of being like everyone else was just too much for an introverted, poetic, romantic teenager like me. What I was seeing in mainstream fashion, TV and the media in general ‘spoke nothing to me about my life’ (thank you, The Smiths). I neither wanted to be like the images I saw nor did I find them attractive or sexually appealing, but somehow I felt a certain pressure to conform. Conform I did and it got me nowhere apart from being very miserable, overwhelmed and feeling kind of second class. The idea of insane luxury living where you do nothing but shop and concentrate on your looks I find vacuous and chillingly dull.

Fashion Rape! Highland Rape! Did I just read that in my Dad’s newspaper? A sprawling shock tactic headline next to what looked like an alien in a ravaged lace dress was my introduction to Alexander McQueen and I was instantly addicted.

What the papers described as vile, ridiculous and misogynistic, I saw as an anarchic, anti-establishment, anti-fashion, hyperreal and hyper-powerful. I didn’t see woman as object, but woman somehow freed from the shackles of trend by being given a different choice from the current status quo, and having choice is imperative. I also saw a much needed different perspective, not rinsed of all its meaning and passionate sentiment, but instead an open nerve of a generation and society that was bored with fashion’s banality.

In all the McQueen shows I saw pain, tension and anxiety – maybe that’s just because I work from those feelings, but even looking back at his work now, you can clearly see these are not happy, frivolous affairs. It’s the powerful feelings and emotions that you see in his shows that set him apart from others and why he’s been so successful and what’s helped sell the clothes. McQueen’s spirit was not sanitised or polished. It was gut wrenchingly sickened, fervent, formidable and all consuming.

I was surprised and thankful to discover McQueen’s roots played a large part in why and what he created; I could partly relate to his story. What’s interesting is when you look at the image of fashion and a lot of the media around it, it’s easy to presume that unless you’re a certain type of person you will not fit in, but McQueen definitely doesn’t fit the fashion stereotype. Don’t believe the hype so to speak, and avoid looking at the front row or socialite columns, because behind this façade there is a plethora of deeply wonderful, empathetic and talented characters.

McQueen’s background obviously had bearing on his attitude to Saville Row and the fashion system. On one side he fits the hard, endless graft mentality of the job and has something to say and offer fashion in a very fashion-like way through his shows, but on the other hand he was so very different. Each show’s immediacy was more than the clothes and styling, and had a deeper, raw energy, that no other designer seemed to have at the time except for Boudicca. At times his shows looked like he was sticking the middle finger up to the system. A rebel? Not sure. A man with a dirty sense of humour, some issues and something to say? For sure!

To me McQueen’s skill for fashion design was insignificant when I think about the bigger picture and impact he has had on fashion and society. Here is a man who was working off the cuff and following his desire with the help of an amazing team to magnify his vision to a fashion and a mainstream audience. No silver spoon, no major backing, just McQueen, his team and tons of tons of heart. While all others around him seemingly played by fashion’s rules, typecasts and expectations. McQueen infiltrated the system, played to its timings but the rest was a stage for whatever he wanted to show and this changed things forever.

Stay tuned for part 2, coming next week when we find out about what it was like to work with the great designer. 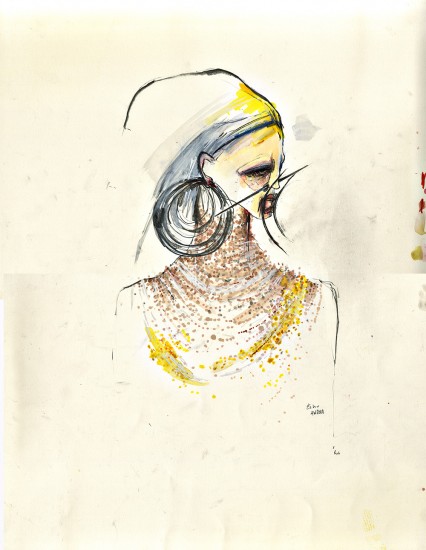