Professor Helen Storey‘s Dress For Our Time project continued its journey in Dubai, where it appeared at the UNHCR’s co-hosted Youth Engagement and the Global Refugee Crisis Conference, held at the American University, as well as featuring at the Dubai International Humanitarian Aid & Development Conference and Exhibition (DIHAD). We spoke to Louise, the model who wears the dress in live installations, to find out more about the experience in Dubai. 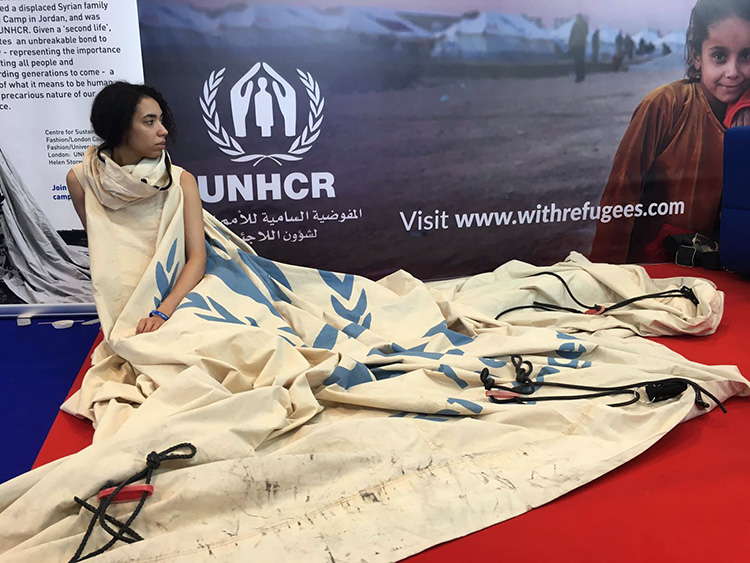 The youth engagement conference was held with the hope to raise awareness and inspire young people to make a difference in their communities, and to highlight the integral role played by youth in advocacy and humanitarian work. The conference hosted four panels that focused on the knowledge and experiences of government officials, academic scholars, youth and university students, humanitarians and business representatives. Louise told us:

At the Youth Engagement Conference we were asked to help open the conference by walking through the auditorium in the dress, snaking through the audience during a film, in which famous actors told the story of what you would take with you if you had to leave your world behind. The film was really touching and our presence seem to add to the impact of it. After that I was brought back up on stage wearing the dress during Helen’a talk, after which we stayed on stage for the closing and for photographs with all of the other speakers. You can now walk round Za’atari with virtual reality goggles

In the days after the youth conference, the dress appeared at the thirteenth annual DIHAD exhibition and conference where Louise, was standing ‘in meditation’ as part of the UNHCR’s offering at the event. She also walked around the exhibition space. Louise told us:

At DIHAD I was constantly interacting with people about the Dress For Our Time story. I would go into ‘meditation’ mode when people wanted to take photos. It was great walking around because of the way that everyone reacted to the dress. People would pretty much stop what they were doing to see what was going on. Photographers reacted so strongly to the dress they would often stop and take photos – at one point when I was walking I was faced with a wall of photographers. People mainly asked me if it was heavy, what it was for and how long I’d been wearing it. 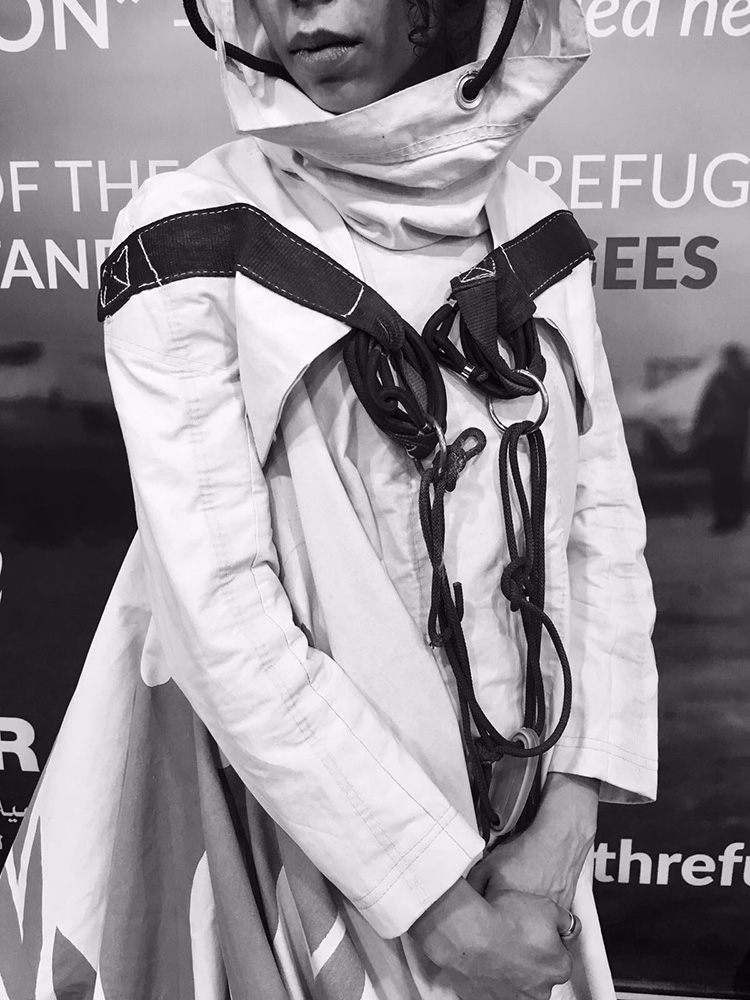 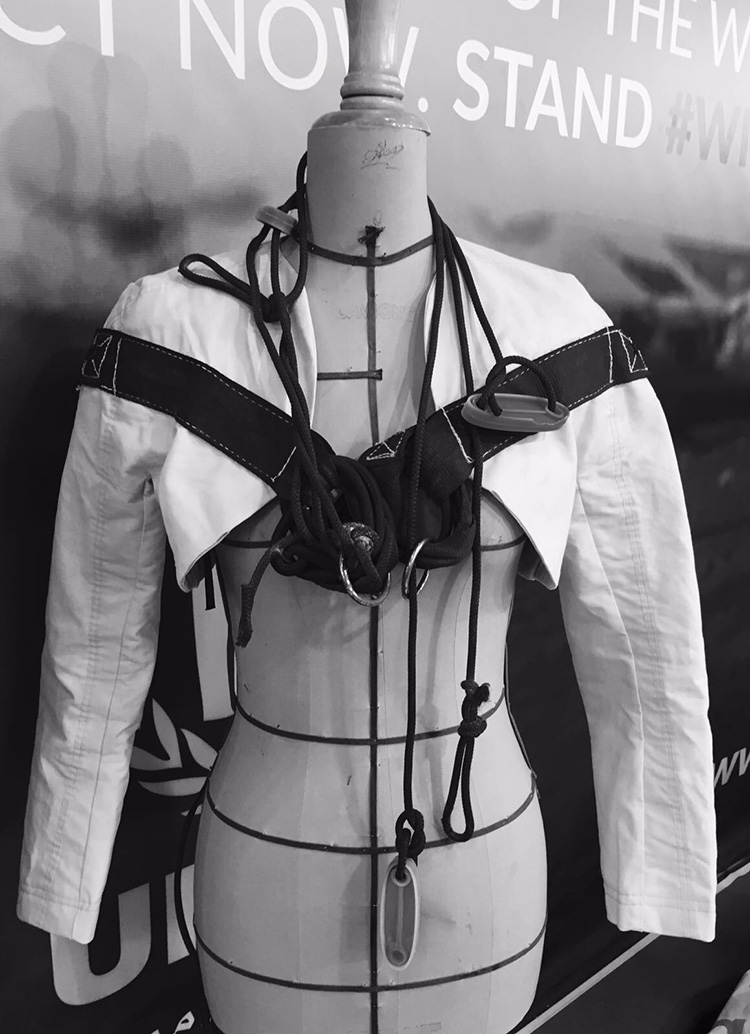 The story of the dress was picked up by news channels across the Middle East including Sky Arabia, AJ+, Al Arabiya and the Daily Mail in the UK, where Helen and Louise were both interviewed about the project. 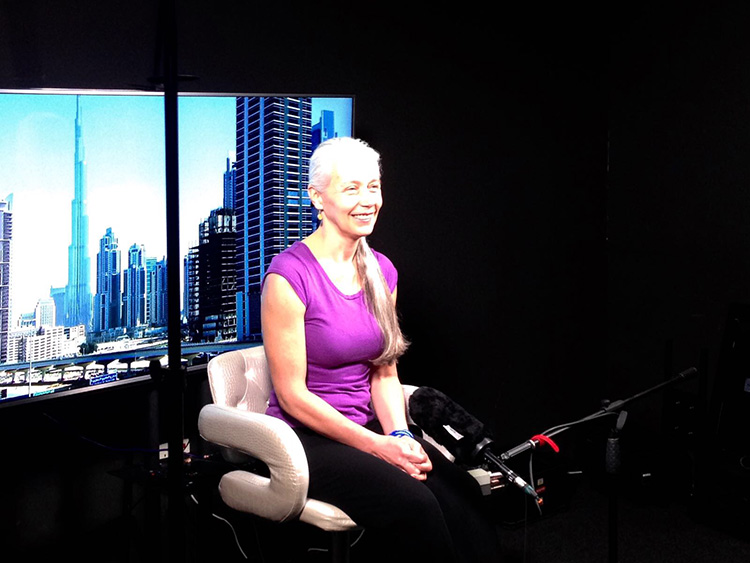 About the time in Dubai, Louise told us:

Dubai is known for being a place of decadence and riches and it really lives up to its reputation. But it’s also a place of stark contrasts: traditional Arab culture versus a modern more western way. Generally the project was reacted to very positively. People saw and understood what we were trying to achieve and that we weren’t there to be malicious or to focus attention on the fashion world. Helen put it best; the dress is a flag for the refugees, a way of getting the conversation started in a new way. One of the most poignant moments for me was when a woman came up to me and asked “how does it feel to represent 65.3 million refugees?” It was a question I’d never been asked before and it took me a while to get an answer; an honour. It’s an honour to be part of this project and to help bring attention to the ongoing plight of so many people. These people, these families cannot be forgotten.