No Comply - Skate Culture and Community

How could one object, a piece of wood on four wheels cause such a phenomenon - Dan Adams

Today, skateboarding is recognised as an Olympic Sport, debuting at Tokyo 2020. Skateboarding is now being seen under a new light and a fresh focus on its benefits is unfolding and its social role is being reimagined. No Comply is an exhibition about UK skate history and culture, recognising and celebrating skateboarding as a force for good. It explores its cultural, creative and emotive qualities, revealing how it can nurture freedom of expression, empower diverse communities and have a therapeutic effect on well-being. Ultimately the exhibition examines how skateboarding, whether a sport or a way of life, continues to be a source of creative inspiration and emotional succour to a widening community.

Spread across three rooms at Somerset House, the exhibition doesn’t follow a chronological narrative. The history of British skateboarding is weaved through personal histories and anecdotal vignettes to tell a communal and current story. The exhibition themes are more representative of  emotional responses to the sport and lifestyle than an academic history of skateboarding and concentrates on ideas around belonging, perseverance, freedom and friendship. There were over 65 contributors to the exhibition who all helped tell a truly uplifting story. As a non-skater and curator of the exhibition, I was overwhelmed with the generosity of time and spirit by all involved, skaters who invited me into their world and helped me write a love letter to skateboarding. 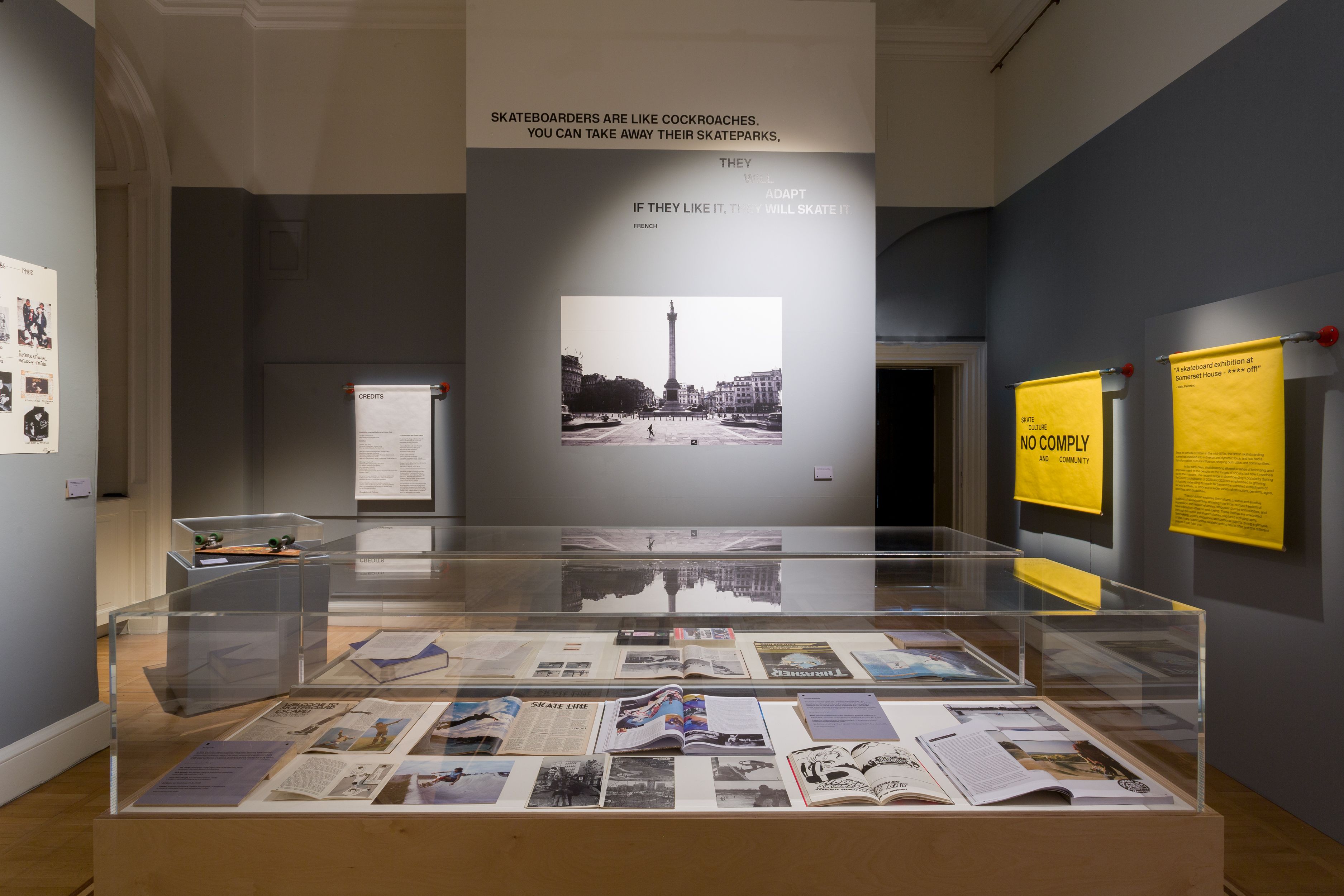 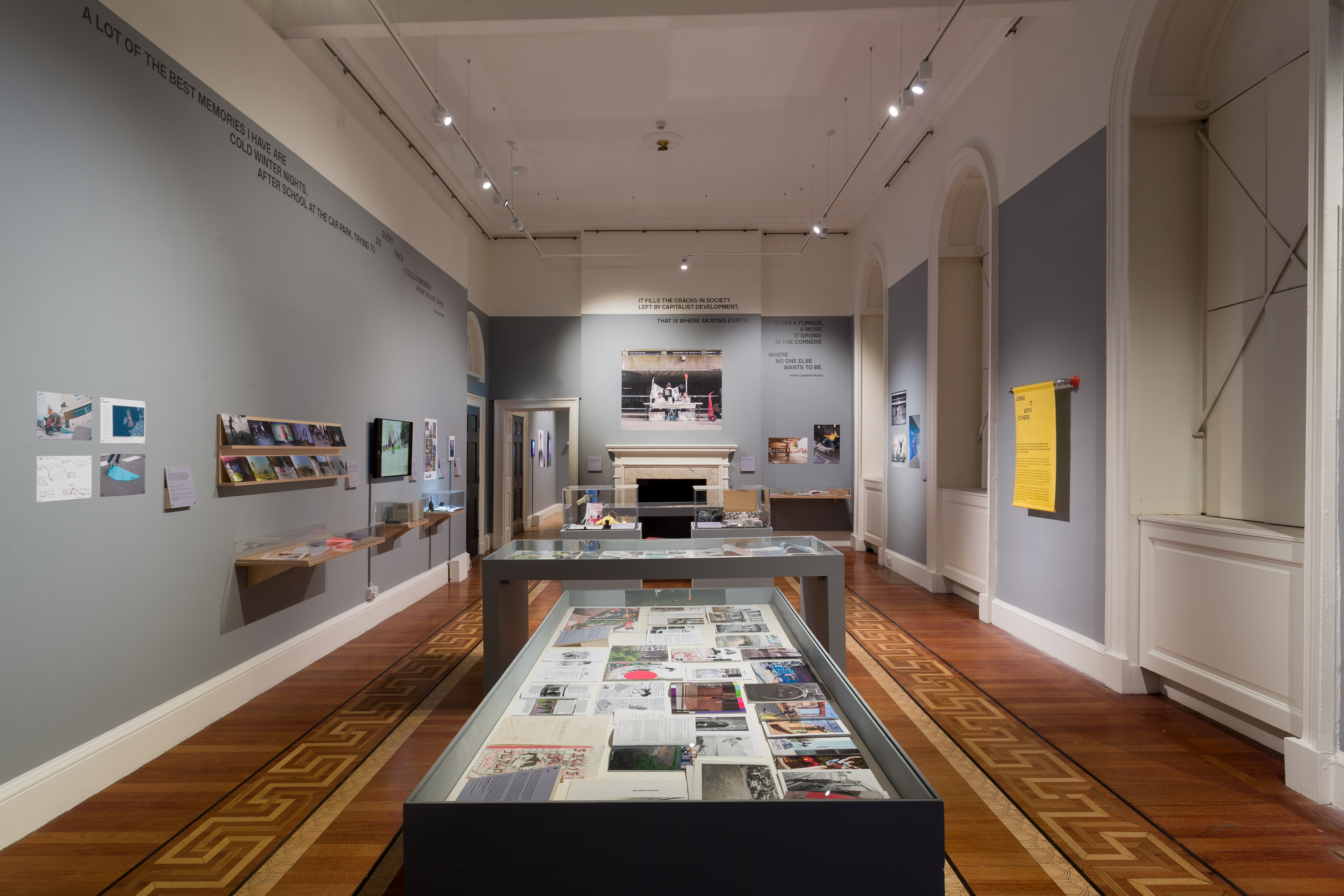 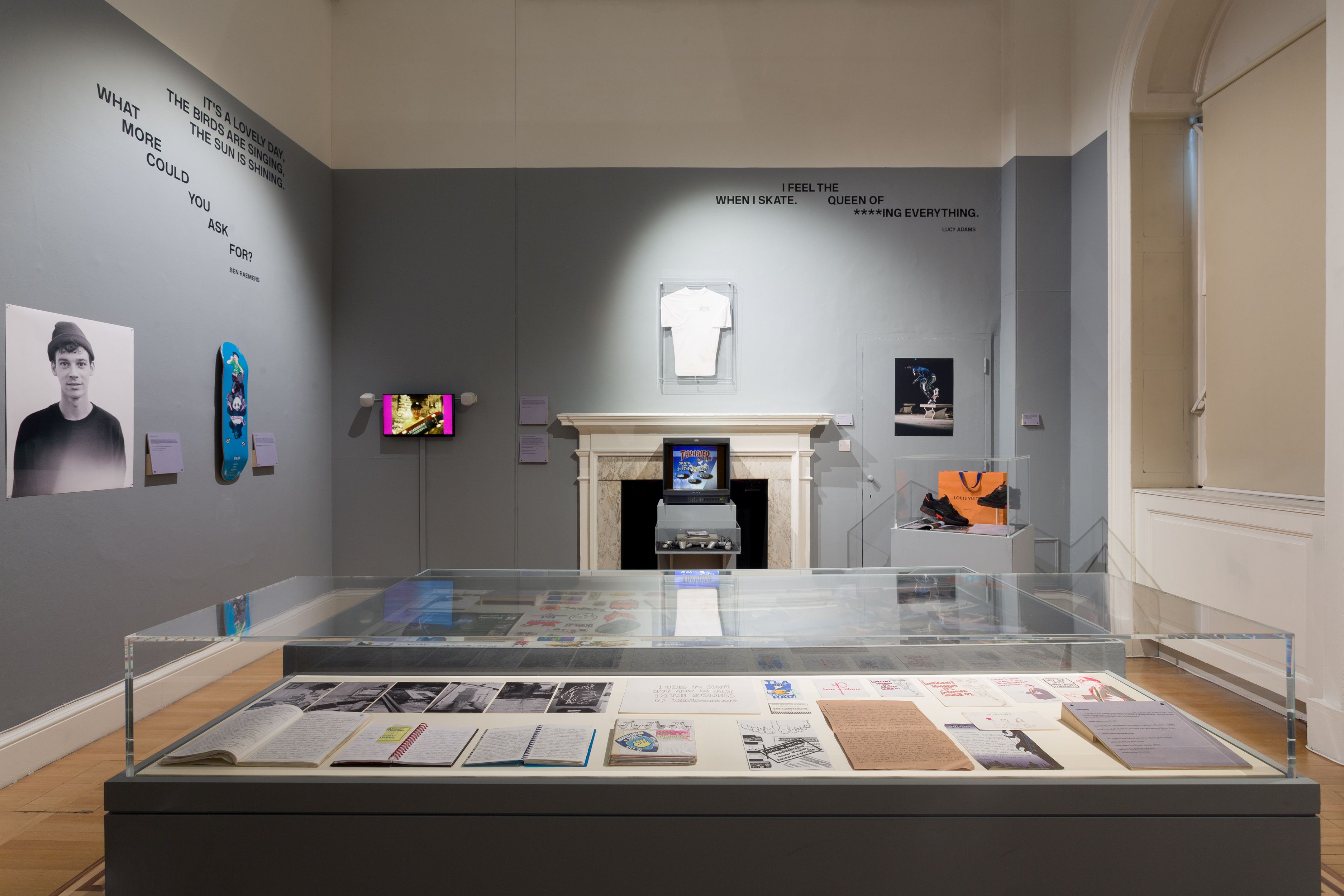 Room 1 ‘City as Playgound’, Room 2 ‘Doing it with others’, Room 3 ‘Doing it for yourself’ © Tim Bowditch

The Exhibition - a brief overview

Skateboarding first emerged in the USA in the late 1950s as surfers began experimenting with and adapting handmade skateboards. By the mid 1970s the craze had hit the UK and up popped commercial skate parks; however, these were short-and most had closed by 1980. Street-based riders began to skate in cities. Reimagining the gritty UK landscape, the city became the playground. The creative pioneers of the British skateboarding scene energetically captured fun, friendship and skills in independent film and publications. Skateboarding’s do-it-yourself attitude and approach helped spread the message giving empowerment and agency to a constellation of subcultures.

Today skateparks and skateable public spaces have re-emerged as community hubs and are now recognised as playing a positive economic and cultural role - skateboarding has helped push the boundaries of what a shared city can represent. The warm embrace of skateboarding is more obvious than ever. This new diversity is reflected in the carousal of content that is still being produced online and in print, upholding the idea that skateboarding still doesn’t care where you come from and celebrates acceptance and inclusivity.

Skateboarders have always experimented with their individual skating style and fashion; it is both a collective and singular pursuit. The personal sense of liberation can often be a conduit to a life and career in the visual arts, creative industries, music and fashion. Skateboarders have a thirst to create something of their own; the passion and perseverance the activity demands attracts and fosters a special type of entrepreneur - non-conformist and rebellious.

Fashion Focus – a selection of objects on display

Loutre is a unisex skate clothing brand rooted in conscious design, founded in 2018 by designer Pia Schiele. Materials are upcycled and sourced from equally environmentally aware suppliers and fabric mills who push for innovative manufacturing processes by rethinking the fibres and techniques used to generate virgin fabrics for our future. The handcrafted garments are made from low environmental impact organic cotton denim, natural rubbers, repurposed deadstock and tech-outerwear fabrics. Each small-batch collection is designed with a focus on versatile sizing to avoid overproduction, while fabrics are carefully selected to reduce environmental impact. 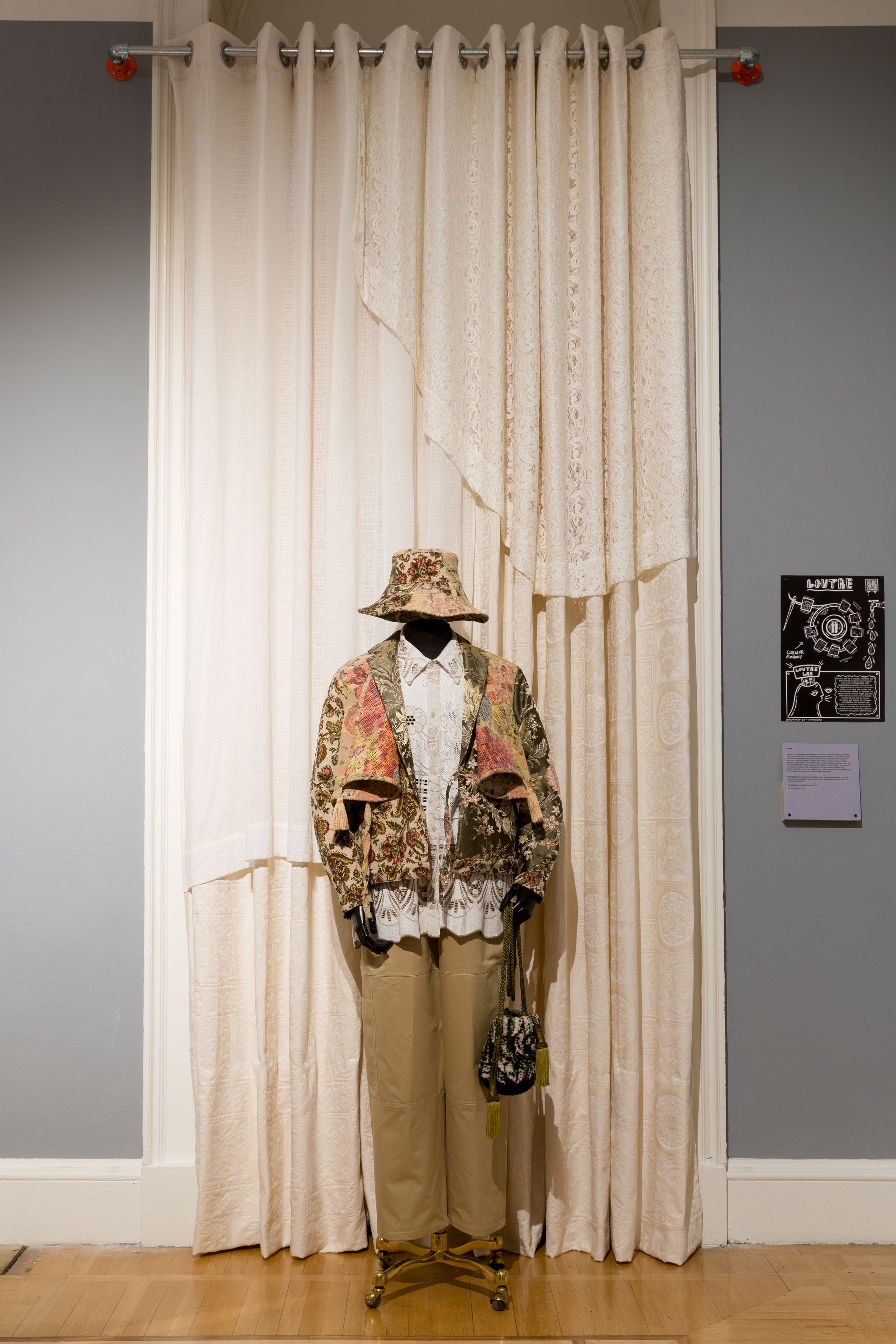 We don’t skate in the sunshine, and the streets are rough.  Kids in all these sunny places all over the world now want to dress like roadmen from Hackney because of what a London skateboard company, and their mates, have done. - Neil Macdonald

Palace was founded in London by Lev Tanju in 2009. The Palace brand is a fine example of how creativity and skateboarding collide to create one of today’s most successful and cult UK fashion labels. Today, vintage Palace items have impressive resale value and are internationally collectable. 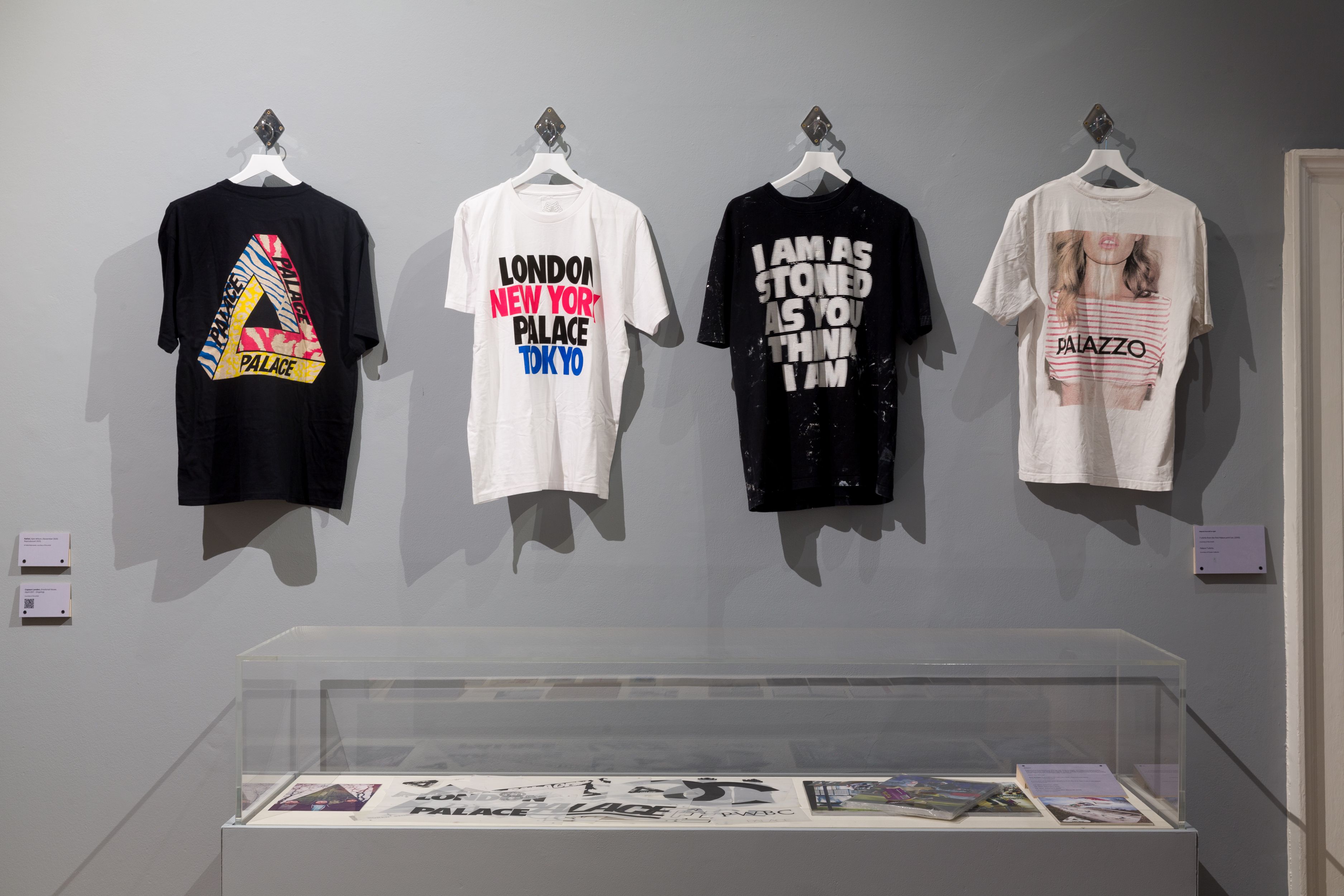 I think I have something, And I want something I can say is mine. Lucien Clarke in Evening Standard Magazine (14th March 2019)

In 2020 professional skateboarder Lucien Clarke collaborated with Louis Vuitton to create a “legitimate” skate shoe. The sport shoe is a current example of how skateboarding has crossed over into high-fashion and again taken on a new meaning within popular culture. Lucien's involvement is paramount to its authenticity and therefore its acceptance within the skateboarding community.