Moses, Mods and Mr Fish: The Menswear Revolution, which opened at the Jewish Museum last week, is an exhibition charting the emergence of the modern male wardrobe from the tailoring workshops of the mid-19th century to the boutique revolution and mod culture of the Swinging ‘60s. LCF News got a sneak preview of the exhibition which not only features items from the LCF Archives but also from the personal collection of MA Fashion Cultures alumna Laura Jones, who worked alongside the curation team at the Jewish Museum as a researcher. 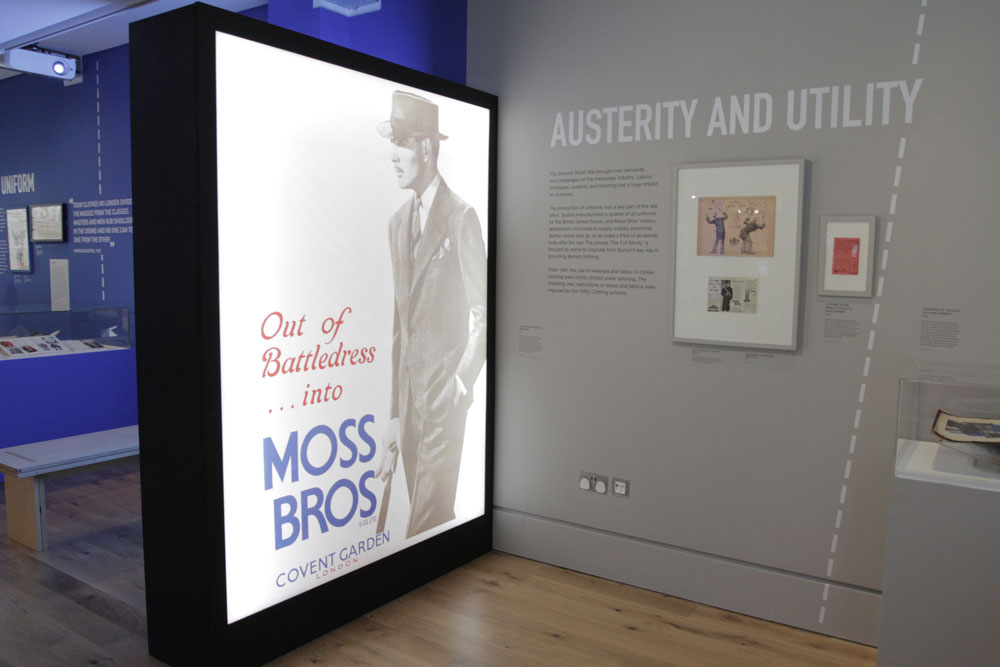 We spoke to Laura about the experience of working on the exhibition, why she thinks Fashion Curation is becoming more popular, as well as her time on the MA Fashion Cultures at LCF.

How were you involved in the new Jewish Museum Menswear exhibition?

I became involved with the exhibition during my MA at LCF. My dissertation focused on a company called E Moses and Son – a Jewish tailoring company who were hugely pioneering in the early to mid-19th Century. Our course leader Shaun Cole got a general survey from the Jewish Museum to say they were going to do a menswear exhibition which he immediately notified me about, because he knew that it would fit really neatly into what I had been studying. I contacted them and told them about my expertise, and how I discovered a lot of information about this tailor, so I went in to see them and I took on the role of the researcher of the exhibition. I took over the early part of the spectrum they were looking at – the 19th century tailors, and then I took over the latter part of the spectrum as well – from the mods in the 50s onwards. I was able to alert them to how interesting and how fascinating some of the early Jewish tailors were, from the period I had been studying. The really pioneering Jewish companies were influential long before the turn of the century – they were the ones that really pioneered the ready-made industry. They were able to make fashionable clothes available to every man, to the middle and lower classes, for the first time.

After my research I stayed on board with the project as a consultant. As nobody working on the project at that time had a real fashion history experience, in particular menswear, it meant that they needed somebody to come to whenever they had a pivotal moment.

I worked together with the curator and during my research I found a lot of the pieces. A couple of things in the exhibition are actually owned by me. I happened to have a really great vintage Burton’s jacket and once I started researching, I started buying old adverts as quickly as I could because they were fascinating. I lent whatever would be useful to the exhibition. 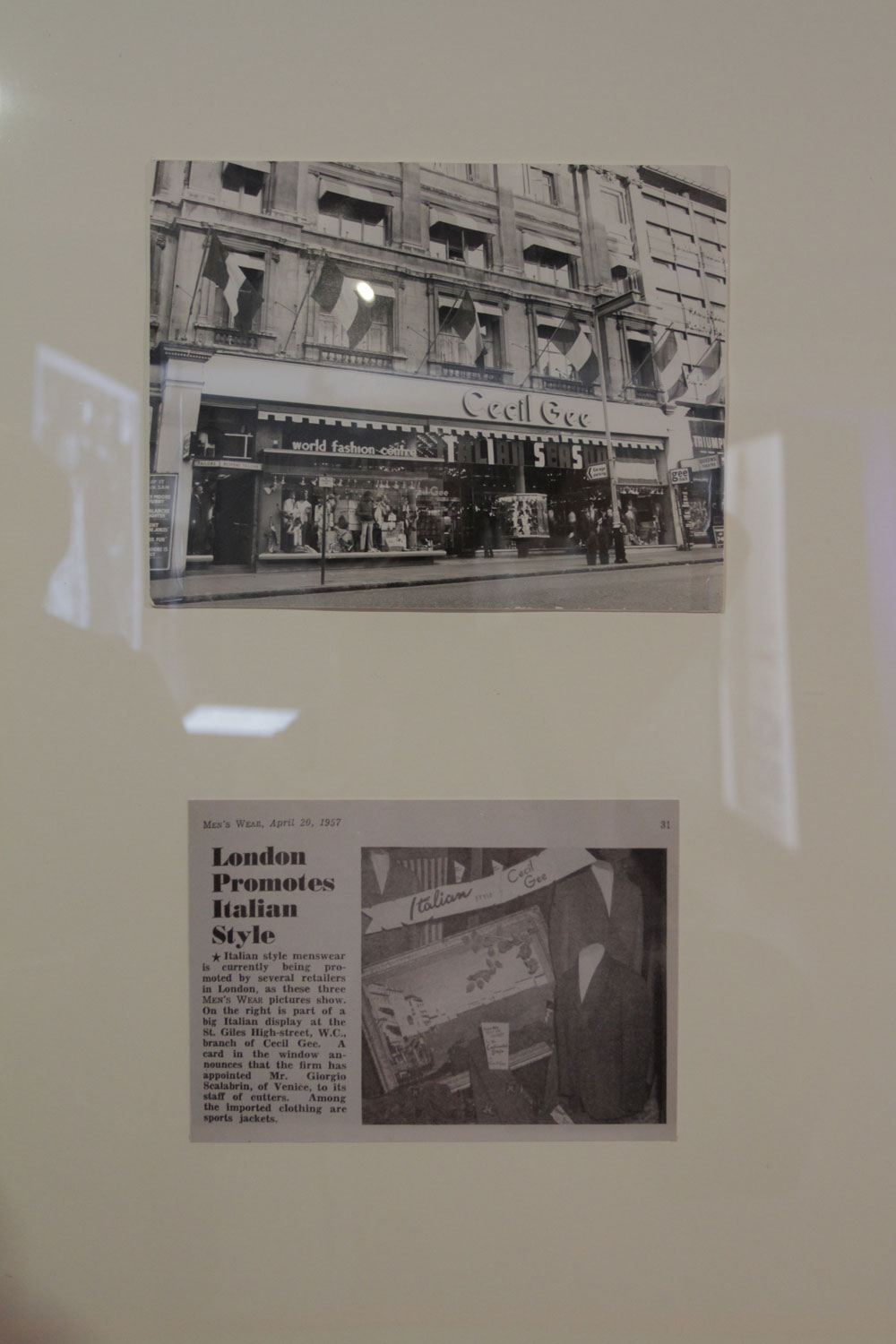 The Jewish museum knew I had been working as a menswear designer and a technical consultant for a very long time, so they asked me if there was any kind of workshop that I might be able to put together in the makings department. There was only a two hour slot on the 10 April, so I came up with the idea of looking at neck-wear and ties. I’m going to give a very brief history of tie wearing, how it came about and what it symbolises. The participants will get to make their own tie. I’m also speaking at a symposium on a panel for the study day on 3 May as well.

Why did you choose MA Fashion Cultures at LCF?

I had been working in a studio for 15 years and I thought that if I was going to do an MA in anything, it felt a bit foolish doing it in something I knew so well. I wanted to further my education and that if I was able to do more on the academic side, then I would have covered everything – I’ve worked as a designer, a pattern cutter, a consultant, a stylist, so I thought that by becoming an academic as well, that would cover everything. When I began my career I worked as a costumier at Angels Costumiers so I was always interested in fashion history, why fashion changes, how it interlinks and integrates with social and economic changes and what spurs changes in fashion. I looked into a couple of courses and narrowed it down to LCF and one other university. In the end it felt like the LCF course fitted more neatly into my  career spectrum.

I did the MA part time – I continued to work as a designer and pattern cutter throughout the first year, and then had a baby in my summer holiday, came back and did the rest. When I started the course I found out I was pregnant in the first week of the first term, so I did the whole of the first year pregnant, and then I did the whole of the second year with a baby. I really enjoyed the course but there were a lot of balls in the air because I was still working and either pregnant, or with a new born  and doing a course at the same time so it was full on!

How did you manage to stay on top of everything?

It was grueling! I think it’s a really hard thing to juggle the emotional world of having a child, and the academic world of how a Masters is structured – that aspect of it was the most difficult. I think the MA Fashion Cultures is a good course and it was really good for me. I really embraced the fact that it was diverse and that you’d be learning a real range of things. The first year I really really enjoyed, the second year was hard because I had a baby. Time was the biggest challenge because you want to do your absolute best. I was lucky enough to find a subject just before I had my little boy, which I knew I was passionate about enough to follow it through or my final project so that was a real relief. Then it was a matter of making the space and time in my life to do it justice. 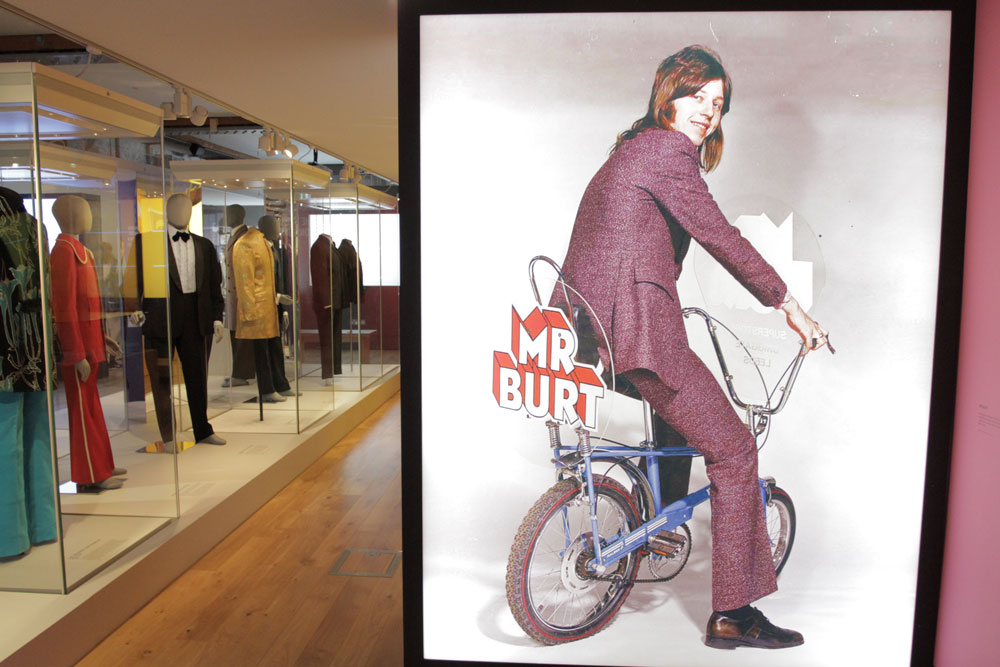 Burton Menswear poster from the 60s

What advice would you give to prospective MA Fashion Cultures students?

In general you need to keep an open mind. I think a lot of people go on a Masters and have a clear idea of where their interests lie and MA Fashion Cultures is not that kind of course – it’s a course that takes you in directions you weren’t expecting to go. I think a lot of people can be a bit narrow minded when they’re confronted by a subject that they need to be persuaded into being interested in. You have to keep an open mind and allow the various facets of the course to seep in because you never know where it’s going to take you. I didn’t know I was interested in 19th century tailoring at all, and it’s ended up being a huge passion and a great job.

What about part time studying?

From a part time perspective, you just have to try and find balance. If you’re still working, then you really need to find topics that fascinate you and that fit with your life. I think it’s really hard to split yourself in too many different directions, so you need to find balance and make time for your inspirations and try to integrate your studies into your life.

What are working on at the moment?

I’m taking a pause from my general career at the moment as I’ve just moved to Devon. I have a job with the Worker’s  Education Association to teach adults, starting in the autumn. I’ll be teaching a range of courses, including practicals such as sewing, pattern cutting and garment construction, as well as men’s fashion history and tailoring history. If that goes well, I will be approaching universities here and seeing if they are interested in my courses as well.

I always knew I’d take a teaching route. I think if you leave London, realistically you’re probably not going to be working for fashion companies, within the UK, unless you do your own thing. I will continue to make alongside this and would absolutely do more research and consulting work too, but I went onto the Masters with a teaching career in mind. In fact I wrote on my application for the course, that I was looking to become more of a consultant rather than a grafter in the industry – that’s exactly what I’ve ended up doing and I’m really happy.

Why do you think that fashion curation and fashion exhibitions are becoming increasingly popular nowadays?

I think that people are contemplating fashion in a more serious way than ever before. For a lot of people, fashion has always been considered quite a surface topic and quite whimsical – it’s not been considered in a serious way. I think sociologists and psychologists and fashion historians have turned that around and began to look at it in a much more seriously, and that it’s a really important and valuable communication tool. How we appear is a vital aspect of how we interact with one another. I think the fact that there’s a lot more courses and interest in fashion in a serious way, fits very well with the fact that it’s become exhibited in this way too.