Following the release of his latest film ‘GAIETY’ last month, we talk to rising star Shem Sylvester about combining styling with directing, having a tattoo addiction and what he wants people to take away from his films.

Born in 1998, Shem has found his style and feet very quickly as a stylist and director. The second-year BA (Hons) Fashion Styling and Production student has been collaborating with peers like Mia Maxwell of FEM Zine and Sierra Pruitt for photography projects. His dark and often mysterious caught our attention last year, so we decided to find out more about his cyberpunk and woman-empowering films below.

Hey Shem, can you tell us a little bit about yourself and what you do?

I’m a freelance fashion stylist, filmmaker and film editor while also studying my second-year of fashion styling and production at LCF. I also love tattoos and I think I might be addicted to them.

Tell us two interesting facts about you?

I’ve actually made all the music for the films I’ve done myself as it allows me to edit the footage in synchronisation with the percussion in the song being used. Music in films is such an important aspect of it for me as I feel like it can establish the entire atmosphere. Is it fantasy? Is it based on reality? That sort of thing.

I guess another one could be that everyone thinks I’m really silly because I’m planning on getting face tattoos in a couple of years, maybe next year even who knows. Every member of my family has expressed their horror about this decision but this just makes me want them even more, I’m so excited for it! 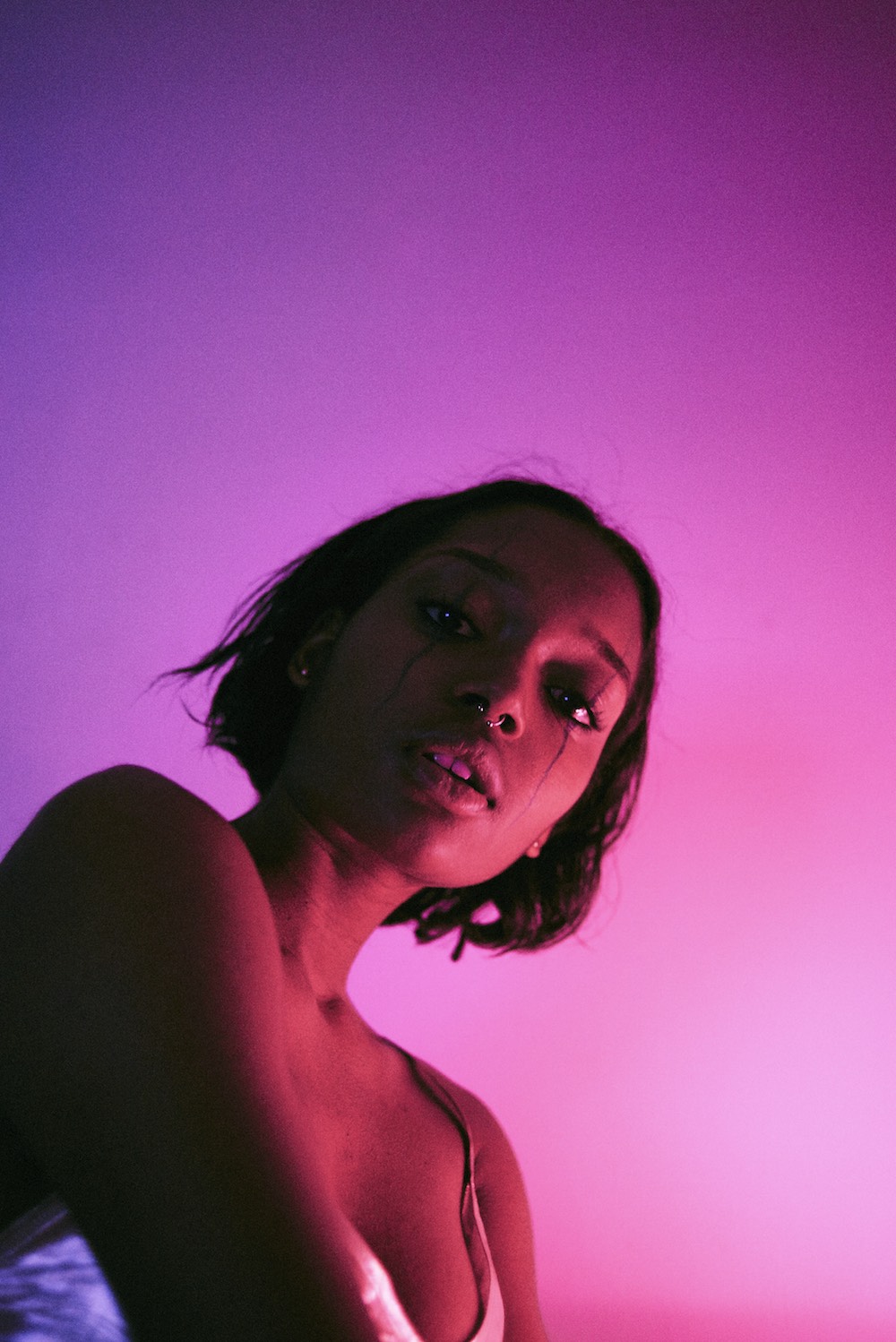 Your latest film ‘GAIETY’ explores a pastel coloured fantasy created by a young woman embracing her own alternative reality. Where did the idea come from?

Well, a lot of the things I watch in my free time are either 90s anime films/series or cyberpunk sci-fi films which are where I get a lot of my inspiration for my own personal work. They always involve some beautiful colours infused with some weird and wonderful imagery so I’m trying to channel my own version of that in this film. The actual idea, and concept if you will, came after shooting the film as a lot of the time I always have the shot types and visual transitions already thought of inside my head so we just end up shooting from those. I knew I wanted to have strong pastel colours involved and I also knew that I wanted to create a bunch of special effects in post-production so we shot it and then the concept became clearer to me while editing.

What do you want people to take away from your work?

I’d really just like for people to just enjoy it and be entertained! Maybe to think to themselves afterwards, “That was cool I wonder how they did that?” It would be even better if it helped people getaway from the reality they live in, even if its just for a couple of minutes. Thats why I watch anime, sci-fi and fantasy based things as its like travelling to a different place, sometimes for better or worse. The same feeling people get reading books is what I strive for when watching something.

What do you find challenging about fashion films?

For me, the most challenging thing is curating the team who I’m collaborating with in order to create the film. I always get a little paranoid about whether people are going to turn up on the day or maybe the location is closed off or the clothes haven’t arrived in time, something along those lines always stresses me out a bit. For a lot of people, I think what they find hard is what shot types they want but I actually find that one of the most satisfying parts as I get excited about editing it!

There Never Was A Real Me In The First Place

How would you explain your style and aesthetic?

In terms of my styling work I’d have to say that for a lot of the shoots I’ve been asked to do have either a neutral colour palette such as grey, beige brown or one focusing on pastel colours like pink, blue and lilac. I gravitate towards women’s clothing for the most part when I’m using brands as I’ve found its often more experimental or interesting. For my films I think what makes them similar to each other is my style of editing rather than the actual style of the shots. I always make sure the music matches and I love experimenting with different special effects and strong colours.

Do you have a muse or source of inspiration?

There’s a videographer called Cole Bennett who shoots really fantastic music videos, he’s blown up recently because of the special effects and backgrounds that he uses and I’d say he’s a massive inspiration to me. Especially as he’s a few years older which makes me feel better because a lot of the other inspirations I have are around 19 which is just a little bit terrifying. Some people have said that the way I edit is similar to and inspired by music videos which is definitely true because I always watch music videos over and over again, they add an extra something to the song for me.

What other stuff are you currently working on?

At the moment I’m in the very basic planning stages of another film and when I say basic I really mean I have some colours and themes in mind. For the next one, I really want to either go crazy with some weird experimental shots or make it really clean and smooth looking so I’ll need to start looking for team members soon. I’m also currently editing some music video teasers for a filmmaker in America which I’m happy about!

Fast-forward to 2028: What would you like to be doing?

10 years from now I’d love to be getting approached to make short films for different brands, maybe for an individual or artist. Something along those lines. I’d also love to still be doing freelance styling and video editing as their such good forms of creative outlet. There are lots of things I’d like to be doing but you never really know where you’ll be at, when I started my course in fashion styling I had no idea that a year later I’d be making films and editing videos for people! So who knows maybe in 10 years I’ll be doing something completely different. Maybe I’ll be designing curtains or something.