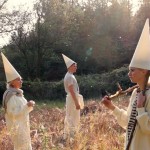 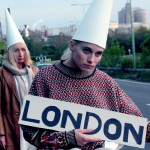 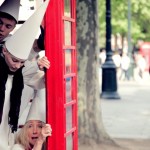 
MA Costume Design for Performance student Oliver Cronk has won the V&A’s Shakespeare’s Tribes competition for his Tribe of Shakespeare’s fools, which he will take to Prague as part of the Prague Quadrennial of Performance Design and Space. He will be sponsored by the V&A to develop his idea for the World Stage Design exhibition there in June 2015.

The V&A held the ‘living exhibition’ Shakespeare’s Tribes event as part of a series in honour of what would have been the bard’s 450th birthday. Costume design students from LCF, CSM, Edinburgh College of Art and Bristol Old Vic Theatre School claimed ‘territories’ in the museum and created characters which interacted with each other in the space.

Oliver created a tribe of Shakespeare’s Fools with director Caroline Williams (currently working at the Young Vic and the Globe theatres) after taking an intertextual look at traditional fool/jester/commedia dell’arte imagery from across the plays, including Feste from Twelth Night, Touchstone from As You Like It, the gravediggers from Hamlet, and Lear’s Fool.

Course director of the MA in Costume Design for Performance, Agnes Treplin said,

“I am very happy that the MA Costume Design for Performance students are achieving international recognition for their work and this reflects that LCF is cementing its place at the forefront of performance design innovation and excellence.”

We spoke to Oliver about his experience in distilling and building his tribe of fools.

How has what you’ve learnt on the MA Costume Design for Performance helped you win this competition?

Agnes (Treplin), Donatella (Barbieri) and Claire (Christie) have been very insistent on us challenging ourselves and pushing ideas beyond a point where we might consider them comfortably resolved, which is a very important, ongoing lesson in my design work.

Marion Yarwood is our course technician and is hugely patient with my ineptitudes. She has taught me loads about sewing, including magic tricks, and contributes to everything that comes out of the studio.

What are your plans for taking this to PQ2015?

Part of our piece is a short film inspired by the 16th century comic actor (Shakespeare’s own ‘fool’ collaborator) William Kempe, and his nine-day Morris dance from London to Norwich. We interpreted this in reverse and ‘danced’ from Norwich back to London. I am very keen to continue to explore the themes that this film touched upon in a new piece of work combining live performance and film, perhaps with London as the point of departure and Prague as the point of arrival.

The curatorial concept behind PQ2015 should provoke some really fascinating work, and it´s a real honour to have our piece commissioned as part of program. I can´t wait to spend ten days in Prague taking in the rest of it all.