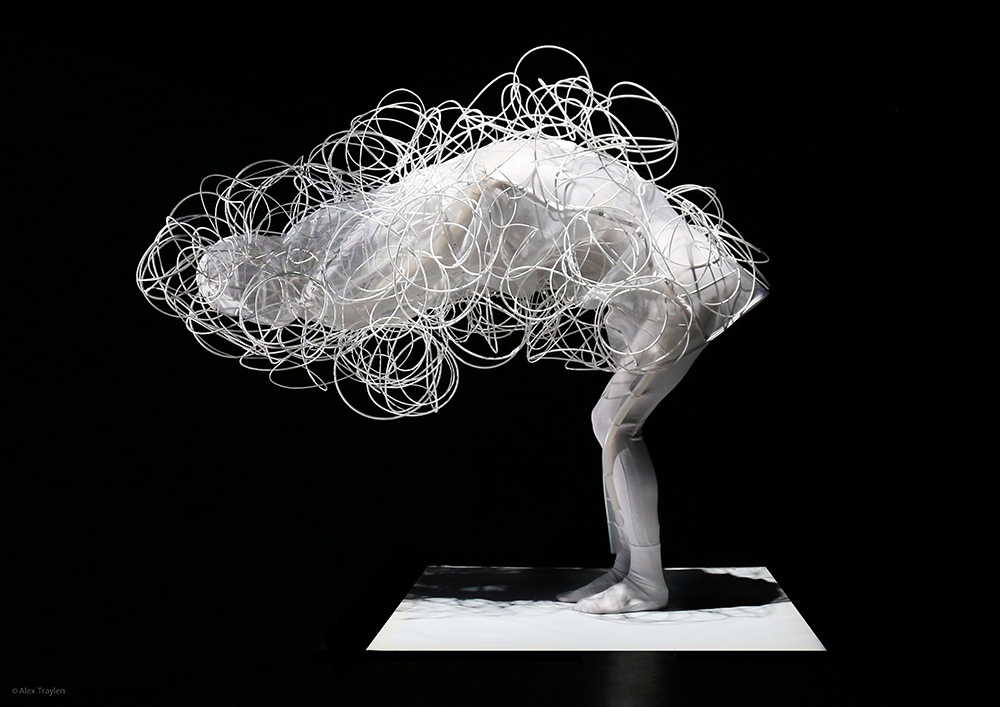 Daphne has been showcasing her final postgraduate project for MA Costume Design for Performance, ‘PING’. She originally showcased her work in Beijing, the exhibition was one of the most popular of 2015 and saw over 200,000 visitors during the month of October. Her work was shown alongside many other renowned international designers, generating great interest. The exhibition then moved to the Mingyuan Contemporary Art Museum in Shanghai during December and January 2016. LCF News caught up with Daphne ahead of this years LCFMA16 Exhibition next week to talk about costume design, LCF and the travelling exhibition in China.

What did you study before MA Costume Design for Performance, and why did you want to study costume design?

My fascination for costume started with historical costumes when I was a teenager. I spent a lot of time teaching myself how to sew and to make my own dresses. A fashion course wasn’t the right fit for me, eventually I realised costume design was what I wanted to do. I was accepted to a BA Scenography course at the theatre academy in Amsterdam (Amsterdamse Hogeschool voor de Kunsten). During the course my vision on costume started to change, I became more interested in an experimental approach to costume. The course primarily focussed on stage design, but gave us room to explore costume design as well as set, lighting, installation, and sound design. This course set a solid base for my current work – it made me realise designing costumes is not only about the garment. All design elements within theatre or performance are equally as important when creating an illusion on stage. The costume is the starting point for my projects, but for the final performance costume, set, light, sound and movement are all equally important. 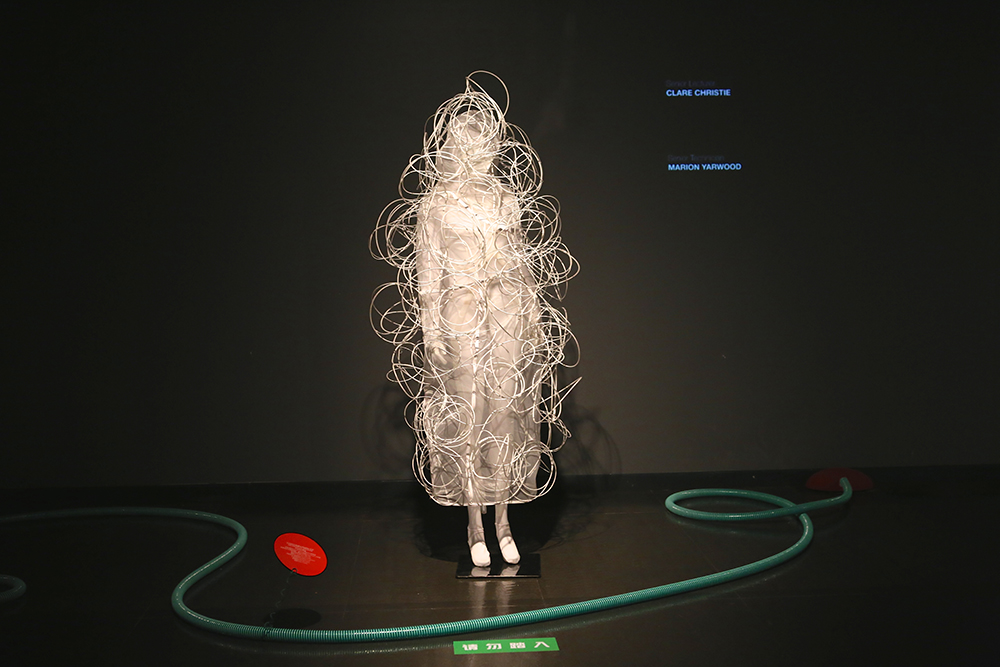 Why did you want to study a postgraduate, and move to LCF?

When I finished BA Scenography, I felt I had an understanding of costume design but wanted to develop my knowledge and skills more by doing a masters degree specifically focussed on costume design. MA Costume Design for Performance appealed to me because it didn’t approach costume in the traditional way of designing for text based theatre. It gave me the freedom to create my own performances. Not only designing costume, but also being in charge of the full performance, combining costume, the moving body on stage, light and sound.

Can you tell us about ‘PING’, your final major project please?

My final project was based on ‘Ping’ by Samuel Beckett. This text is an abstract piece of prose. A fragment of the text:
“Ping of old only just perhaps a meaning nature one second almost never blue and white in that much memory henceforth never. White planes no traces shining white one only shining white infinite but that known not. Light heat all known all white heart breath no sound. Head naught eyes fixed front old ping last murmur one second perhaps not alone eye unlustrous black and white half closed long lashes imploring ping silence ping over” (Beckett, 1967). This passage inspired me, I started to research near-death experiences (NDE) and out-of-body experiences. This research was the main inspiration for the performance and costume. I wanted to visualise the struggle of a person submerged in an unknown and ephemeral world, exploring the relation between the physical body and out-of-body ‘spiritual body’. I tried to capture the ephemerality of a NDE within the performance with smoke machines in the costume. 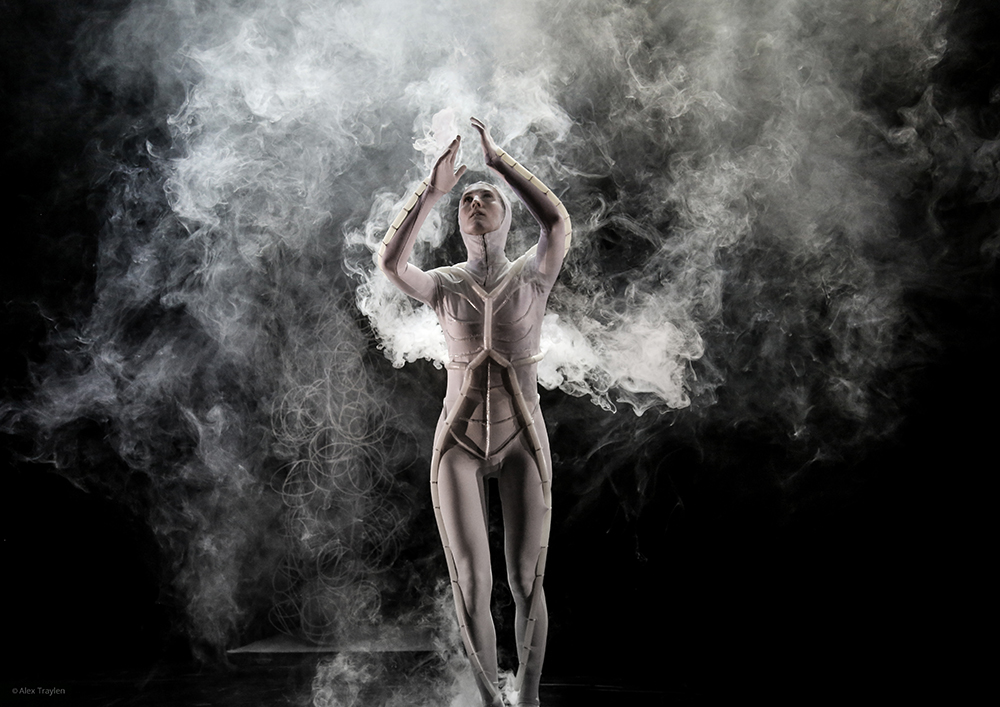 Can you tell us a little bit about the exhibitions in China?

The page website says, “The exposition showcased world-class designers for performance and the internationally renowned European institutions from which they come. This will be the first exposition of its kind. The exposition places a spotlight on the design process from initial idea to final production and covers the full range of Design for Theatre and Performance.” In essence, the exposition design and curation sees the show as a “garden of ideas” that the differences and nuances of design approaches across Europe. Unfortunately I couldn’t attend the exhibition, but I’m proud to be a part of it as my work was shown alongside internationally known designers.

You were also a director and film maker MARIE at Sans Souci Festival of Dance Cinema, Colorado USA. Can you briefly describe the film and festival?

I made the costume for MARIE during my MA. We did a performance workshop with performers and choreographers, during the workshop we looked at the influence of the costume on movement and experimented with the possibilities. The workshop was filmed, but I didn’t use the content till after the course. I wanted to continue working on this project by making a film after the course finished, so I collaborated with editor Alex Marshall. This costume/dance film was inspired by the character of Marie in Alban Berg’s opera ‘Wozzeck’. The film is based on three different emotional and physical stages, love, destruction, death. It shows a woman driven by passion and love, struggling with her emotions and desires. MARIE was first screened at ‘Tees Dance Film Fest’, which took place at the Middlesbrough Institute of Modern Art in May 2015. MARIE was then screened for the Sans Souci Festival of Dance Cinema in Colorado – this is quite a big event for dance films globally. 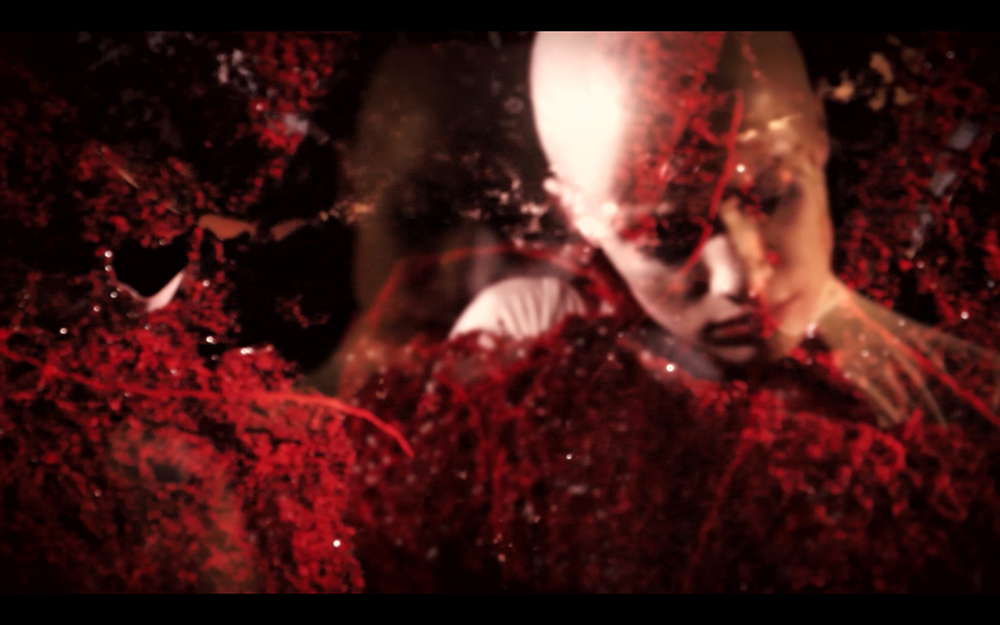 MA Costume Design for Performance student Daphne Karstens and Alex Marshall collaborated on MARIE. Here’s a still from the video.

What’s your favourite thing about being a costume designer?

What I loved the most about being a costume designer is that every project is different and can be a new experiment. Everything is possible and the only guideline is the body of the performer. The human body fascinates me, what I find interesting is the influence of costume on the moving body of a performer. Costume can be restricting or allow movement – I like to experiment with this element of costume.

You’ve previously worked in China, Belgium, USA, Holland, France, Finland and UK – does a costume design lifestyle often involve a lot of exploring around the world?

In my opinion it’s partially the choice of the designer whether to focus on showing work nationally or internationally. It’s easier to establish yourself as a designer if you base yourself in one specific country, networking is a big part of being a designer. Showing your work internationally means the people you work with often change, and the audience is always different. This makes it more difficult to establish yourself as a designer. Personally I am very interested in showing my work internationally. This is part of the reason I decided to move from the Netherlands to the UK, and why I’ll be moving to Australia in March. I’ve always loved travelling, I believe getting inspiration from different cities and cultures is very valuable. I hope in a few years time I will be able to show more of my work internationally and realise new projects in different countries. 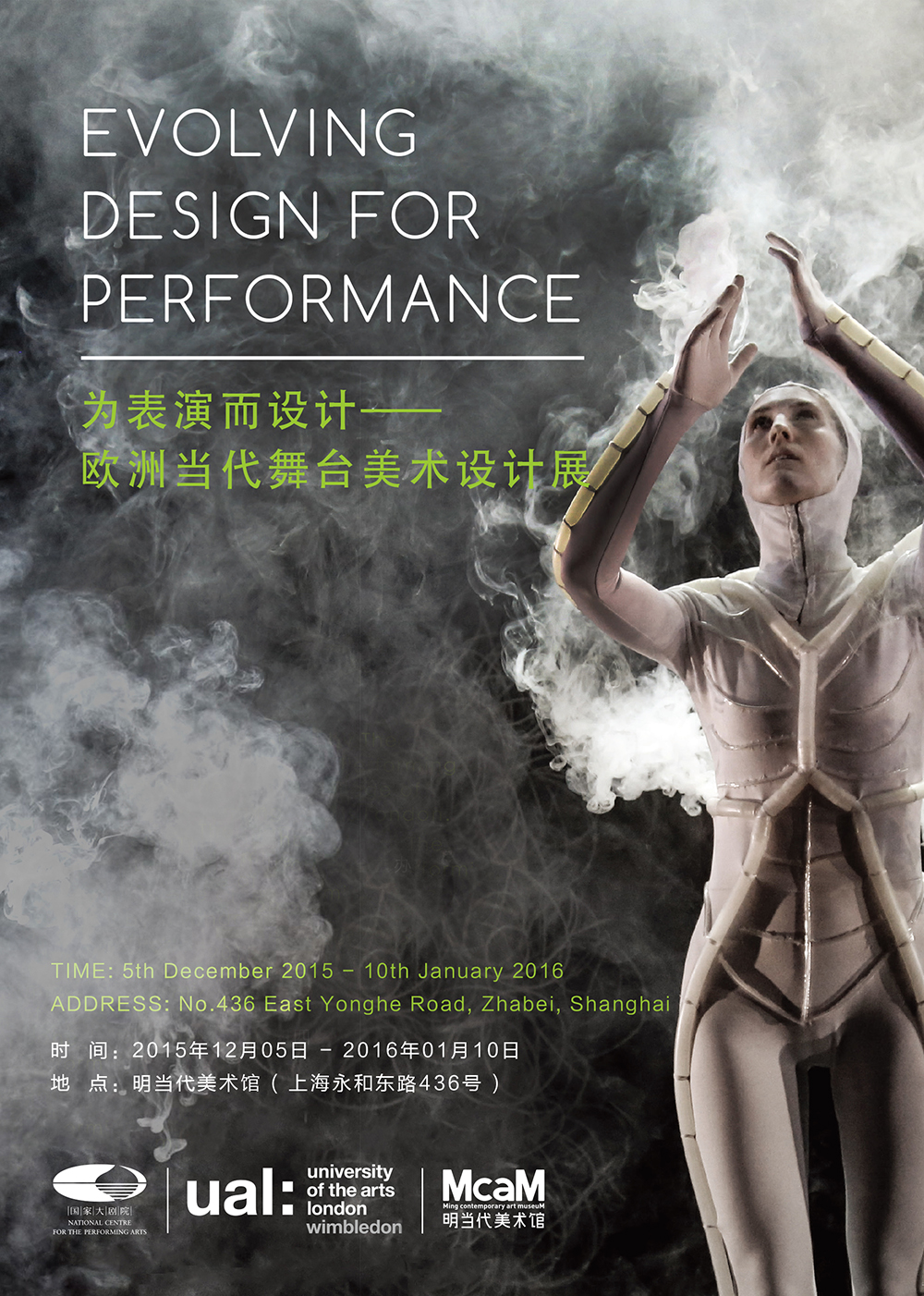 MA Costume Design for Performance student Daphne Karstens work will also be on display in Shanghai.

You’ve recently started exploring the sculptural side of costume, what do you kind the most interesting part of costume design?

I started exploring the sculptural side of costume during the MA course. It interests me because it pushes the boundaries of costume to explore and think about different shapes and materials. Making a pretty dress or a nice tailored suit simply doesn’t appeal to me. I am more interested in exploring new and different shapes on the body using uncommon materials. For ‘MARIE’ I used metal sponges, and for ‘PING’ I used plastic wires and a smoke machine.

What three tips would you give to anyone considering studying MA Costume?

– Don’t fear failure, but learn from your mistakes. University gives you the opportunity to explore your creativity! The first time you try something you might fail, the second time you might succeed.
– Stay true to yourself and know what your strengths and weaknesses are. But never let your weakness limit your designs! Find your way of dealing with your weakness and don’t be afraid to step out of your comfort zone.
– Everything you do during your design process will eventually influence the final outcome. A random sketch you make might end up being your main inspiration. 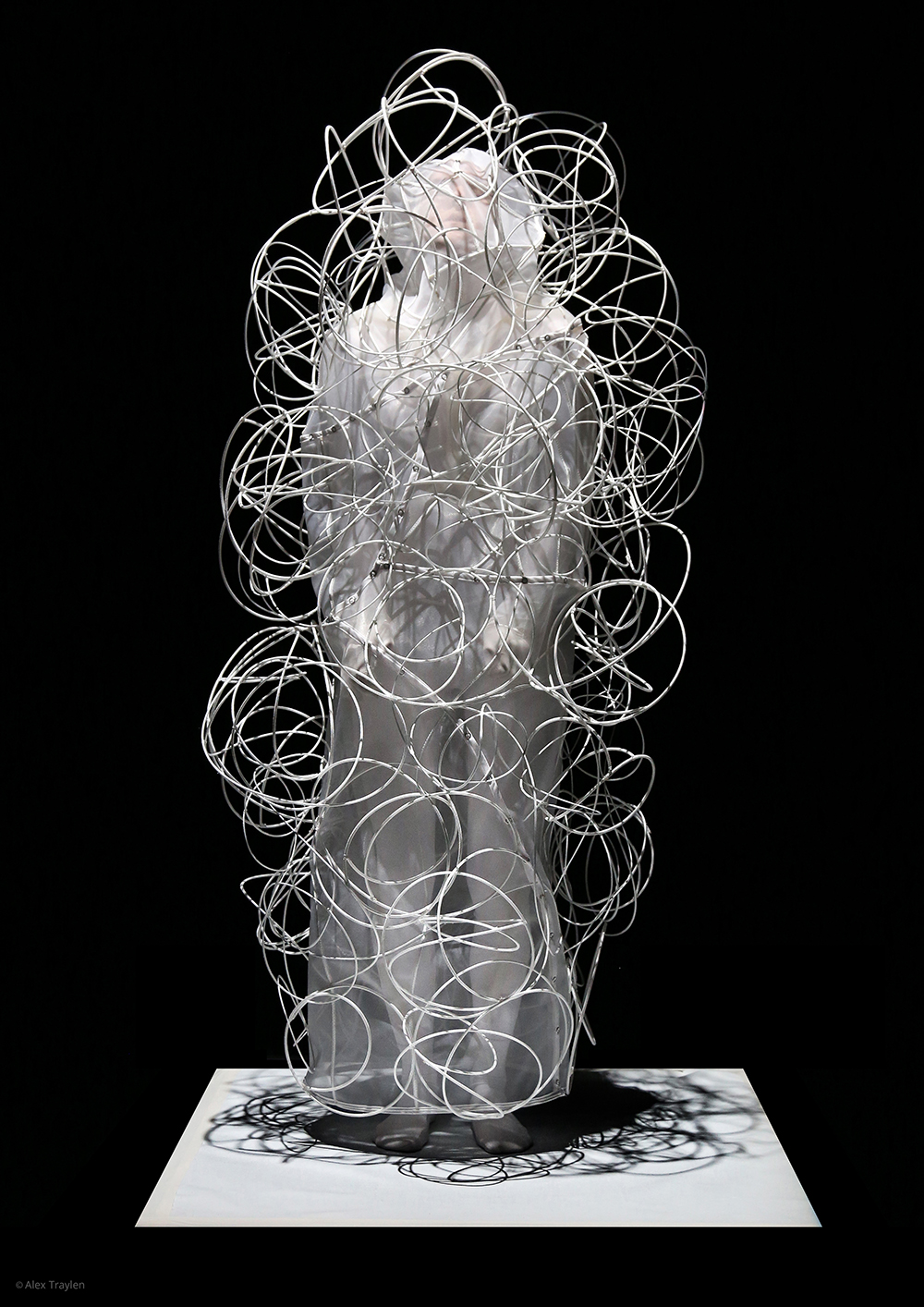 What are your plans for the future, and where would you like to be in five years’ time?

I’m moving to Melbourne in March. I’m aiming to show my previous projects ‘PING’ and ‘MARIE’ in Australia, as well as setting up my next costume based performance. This performance will be based on the concept of solar powered costumes and will help my research in technology used in costume. I’m hoping to find an artist in residency opportunity or a sponsor to be able to realise this project. I’m considering a move to Berlin after Australia as the art scene is very alive there. There’s some great opportunities for young artists. In five years I hope I’ll be able to make an income fully out of my costume work as an independent designer. I want to continue my research on technology in costume and initiate my own projects based on this research.