Lorraine’s whistle-stop tour through the history of the bra

MA History  and Culture of Fashion (now MA Fashion Cultures) alumna Lorraine Smith recently made a very special donation to the LCF archives as the legacy of her MA research topic. 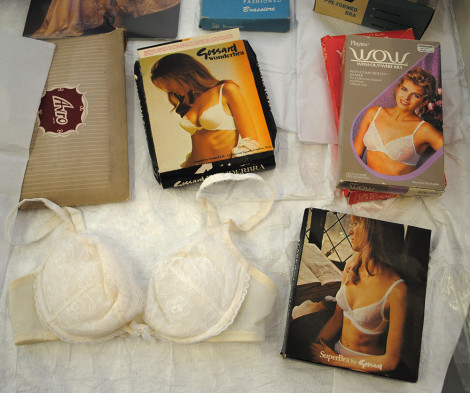 Some of Lorraine Smith’s donation to the LCF archives

For her MA, Lorraine undertook an exploration into the bra – an everyday item of clothing with a big political presence and a big impact on female identity. She was sponsored by the Yarwood Award from the Costume Society to complete the project last year.

She began collecting the vintage bras via eBay in order to study them and this led to her creating a very special archive indeed. As Lorraine told us, these objects represent the history of the development of underwear.

Her favourite in the collection is a 1960’s M&S bra with a truly psychedelic print, but the bras range from those produced in the 1920s to more recent creations form the 1970s.

1920s In the periods before elastics were widely used, brassieres, as they were known, functioned differently to how they do now. Before the 30s the bust was mostly treated as one item. In the 20s in particular it was all about minimising the bust to create that svelte flapper girl look.

1930s With the introduction of separate cups, bras became all about uplift – and have been ever since. In this period we get darts, shaping and elastic for improved fit. The term ‘brassiere’ was shortened to ‘bra’ meaning that the modern bra as we know it was born.

1940s Still using the technological leaps of the 30s, bras in the 40s became more pointed and interacted with the wearer’s outerwear creating a more fullsome ‘pin-up’ silhouette. The time of scarcity created by the war meant that styles were functional, but glamour was prized and emphasised as patriotic.

1950s The 50s saw a boom in bra creativity. Designers and manufacturers tried everything – from the underwired bra to the strapless bra to the padded bra. She even showed us an inflatable bra designed originally for women who had had masectomies, but also marketed as a ‘day to evening’ item with the wearer being able to increase her bust for those all important evening occasions after a demure day in the office(!) 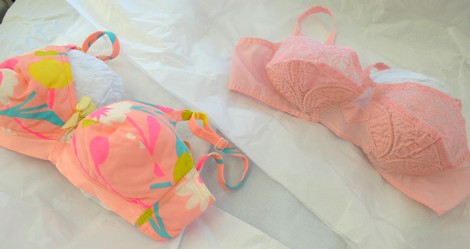 1960s This is when stretch straps with adjusters came in plus with all the new ways to print on nylon bras became brilliantly bright.. or garish depneding on your point of view.

1970s Finally in the 70s the bra as we really know it today emerged. New manufacturing techniques meant that the cups could become seamless, with stitches no longer showing under t-shirts and cotton dresses.

BA (Hons) Fashion Countour students will have access to the bras safely housed in the archive, which will now be able to inspire the lingerie of the future.

Lorraine’s top tip for those who want some bra-inspiration is Oxford Street’s Topshop store, which is just over the road from LCF’s John Princes Street store. As she told us,

“They use all the different techniques there. Sometimes I just go in to browse and get ideas. You can really see the effect of a historic collection on their designs.” Lorraine Smith and her collection in the LCF archives