London Collections Men SS16 proved menswear’s growing popularity and mass appeal, with an international cast of fashion industry big guns in attendance and a whole lot of media coverage. Its move into the mainstream implies an exciting time for British menswear. Venues all over central London were transformed into innovative catwalk arenas, and a handful of designers on show cut their teeth here, at London College of Fashion. 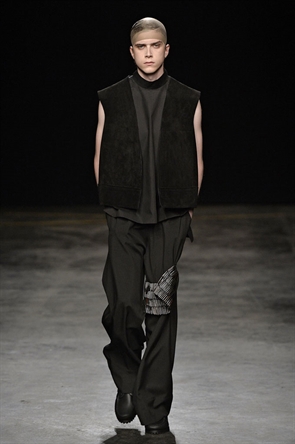 Another progressive LCF alumni on schedule this season, was J.W Anderson, who made waves yet again with his galactic, Japanese inspired collection, featuring tie-wasted trousers, sashes and sumo jackets, sci-fi digits and metallic embossing. The golden boy of British fashion began his label in 2008, after studying BA Fashion Design Technology: Menswear here at LCF and has since developed lines of menswear and womenswear as well as designing for brands such as Versus. James Long, who graduated from LCF in BA (Hons) Fashion Design Technology: Menswear, presented denim and vibrant geometric patterned knitwear, tie-dye, and graphic prints on shorts and joggers, for his more-is-more collection. Dyed jean jackets and leather bombers embodied his signature use of leather and denim, and brought a street wear edge to the aesthetic.

This season, menswear designers, including LCF alumni, pushed themselves to create progressive collections, catering for the ever-changing market and reinventing what British menswear means now.