As London Collections: Men launched this afternoon, LCF’s MA Menswear graduates were already being congratulated on an accomplished performance.  The designers set things rolling with a first class display of colour, creativity and technical prowess. It was the course’s first stand alone show – another sign menswear deserves its own spotlight on the fashion stage. 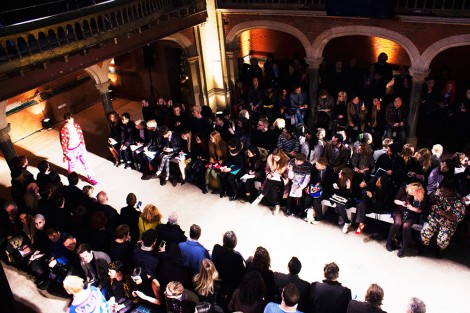 The beautiful Former Welsh Chapel, complete with choral music set a commanding scene. Kitty Ng began the show with a line combining traditional Asian handcraft techniques with high-tech knitting and weaving. Inspired by the sustainability of the waterproof organic plant materials in ancient Asian farmer’s raincoats, she showed a whole other side to raffia. On shoulders, hats and collars it was imposing, with leather-like black trousers, it was slick.

Gebei He also showed the art of the knit with deconstructed tops and oversized cardigans. Colours were as warm and autumnal as the leaf details knitted down the back of some garments. Thien Trang Bui’s palette of silver, greys and the softest blues was equally soothing. Delicate silks and lace on everyday T-shirts and jackets brought a new meaning to ‘smasual’ but a lightly sparkling suit was still the standout piece.

While embroidery on barely-there netting introduced elegance to Bui’s collection, Emma Fenton Villar’s denim line had its own grace. Produced in a British weaving mill, the surface textiles can be cut by the wearer to reconnect consumers with their clothing. The resulting fraying layers added another dimension and pattern to a mindful but practical collection offering a range of parka coats, bomber jackets and jeans.

Xuefei Wang’s tailored minimalism provided the sharpest collection of the show. Monochrome block colours played with silhouette and the crisp shirts with a range of trouser forms made the collection wholly wearable.

Fur rucksacks and overnight bags in vivid royal blue, pink and orange added pops of colour to Jun Zhou’s textural pieces. But colour’s greatest effect was in the prints of Young Hwan Yang and Ka Kui Cheng who both brought that necessary sense of humour to fashion. Yang’s psychedelic prints and soft structural shapes with tassels were a formidable match. While Cheng’s commentary on cultural clichés played out in jackets, trousers and knitwear covered in comical faces of the Queen, the Statue of Liberty and French men in berets.

Na Liu closed the show with light coats and tops in earthy colours and tailored separates. While a full length, veiled bodysuit and helmet covered in white flowers were striking but impractical, gloved coats and jackets cemented the sartorial ingenuity of LCF’s students. 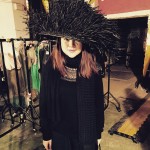 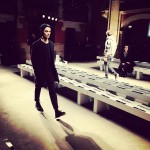 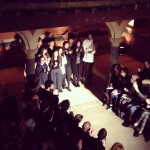 The designers after the show 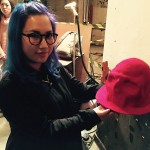 Gebei He with her hat design 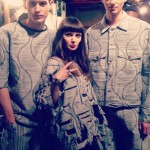 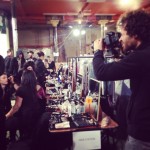 Makeup by Andrew Gallimore and the M.A.C PRO Team at M.A.C Cosmetics

The twelve designers showing were selected by a panel of key industry figures including Daryoush Haj-Najafi, Machine-A’s Stavros Karelis, Port’s David Hellqvist and Becc Gray of Bloody Gray but the entire course cohort’s work will be on display in the MA exhibition.

As for the show, we’ll just have to see if the likes of Oliver Spencer and Christopher Shannon can meet the standard that LCF’s students have set today!