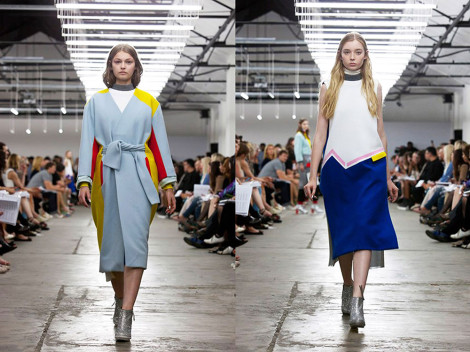 Nikita and Tina Sutradhar’s designs on the BA13 Catwalk

LCF alumnae Nikita and Tina Sutradhar have had phenomenal success with their label MIUNIKU, scooping a special award in the LVMH prize of €100,000 and a year of mentoring. It was only last year that the sisters launched their debut collection at LCF’s BA13 Runway Show.

The designers who both studied BA (Hons) Fashion Design Technology Womenswear, fended off competition from longer established brands such as Simone Rocha and Vika Gazinskaya to claim one of only two special prizes.

The collection balances clean lines and graphic details, featuring an eye-catching canary yellow made fresh by cool blues and white. It was spotted at NYFW.

This year’s winner of the prize, Thomas Tait, also has an LCF connection – the designer is the practitioner in residence for MA Menswear and MA Womenswear. Thomas has been working with MA Womenswear students and has given talks on his career so far, and is set to do the same with the Menswear students.

Congratulations to these incredibly talented designers and to all who made it to the final of the prize.