This year’s edition of the awards took place at Brunel’s Old Station, more than 320 sustainability leaders attended the evening that celebrates sustainability excellence within tertiary education. The awards announced 16 winners on the night, along with 22 high commended, the judges acknowledged Charlotte’s ‘incredible drive and passion for sustainability’ after setting up the society. 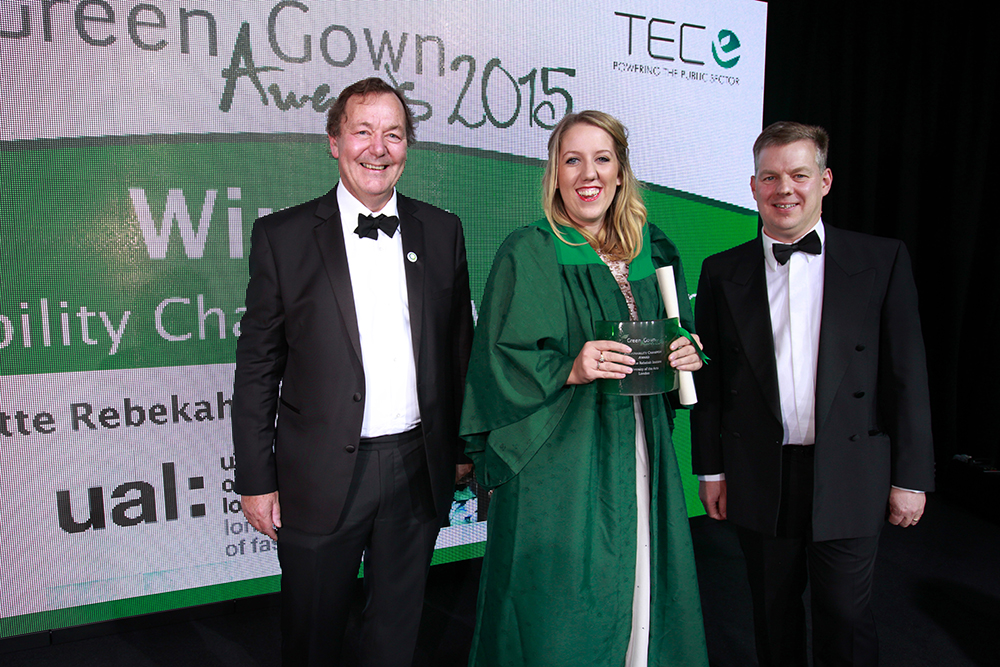 Charlotte founded the Ethical Fashion Collective, a society that ran a number of educational events, while she was still studying. The society raised over £8,000 for charity through organising ethical fashion shows with 700 attendees, 35 brands and several industry speakers. Charlotte has since gone on to create a new social enterprise called Know the Origin, an online store that brings together the transparent brands that value people, the environment and aesthetics in equal measure. The concept for the new enterprise came after a recent trip to Dhaka, Bangladesh, where she met Mohammed Yunus, trade unionist for survivors of Rana Plaza – the factory that collapsed in 2013 and killed more than 1,100 factory workers.

Speaking after the event, Charlotte said:

I’m so thankful for the award, and every project that went towards winning it was done through a team. The industry has to begin to head towards sustainability, there really is no other option. We forget how much of a privilege it is to live in a country with running water, the NHS, access to education, the freedom as a woman to be allowed to start a business. I’m so thankful for the opportunity to start Know The Origin to bring attention to the millions of girls my age around the world that are not able to reach their potential or have access to education because they are working in inhumane conditions below minimum wage to make our clothes. I hope Know The Origin will be a place that people can learn that everything we have is made by people just like me and you. I hope one day we will have a high street presence like body shop – to have the influence to be able to bring justice to thousands of wonderful people’s lives that make our products.

Know the Origin is expected to launch online in March 2016, Charlotte also expects there to be a pop-up store following the launch. Her new brand is expected to create design-led affordable sustainable clothing with maximum impact socially and minimum impact environmentally. She hopes this will create new standards of transparency and accountability in Bangladesh for the future. The profits will be used for trade union leadership programmes in Bangladesh and ethical education workshops in collages and universities across the UK.