LCF alumni Gsus Lopez, BA (Hons) Fashion Media (Part Time), was recently selected for Berlinale Talents 2015 as part of the 65th Berlin International Film Festival. Gsus was selected from over 2500 applications worldwide! LCF News caught up with Gsus to find out more about his achievement… LCF News: Can you tell us a bit about the Berlinale Talents 2015 and Berlin International Film Festival?

GL: Berlinale Talents, formerly known as Berlinale Talent Campus, is the annual summit and networking platform of the Berlin International Film Festival for 300 emerging film creatives from all over the world. It is opened for filmmakers in the first 10 years of their career and to be eligible to apply you need to have had at least two short films that have been screened internationally and have won awards or have already made a minimum of one feature film. The selection committee looks at your work overall.

During that week I met and made new friendships with other directors, cinematographers, producers, actors, sound designers, composers, etc. We all stayed in the same hostel and every day from morning to evening we would have film screenings, networking dinners, film related parties, talks and also Master Classes with film professionals that we all admired such as Darren Aronofsky (director of ‘Requem for a dream’, ‘Black Swan’, …), Wim Wenders, Claudia Llosa, Laura Poitras (Oscar winner director of ‘Citizen 4’ documentary), Mathew Weiner (writer of the TV series ‘Mad Men’ and ‘The Sopranos’) and many many others.

LCF News: We heard you were selected for Berlinale Talents, how did this come about?

GL: I applied on their website back in November 2014 and in January 2015 I found out I got selected from over 2,500 applicants from over 170 countries. I couldn’t believe that such a big opportunity was being unfolded to me. It really has made an impact on my life personally and professionally and definitely will make even a bigger one on my future projects and my career as a filmmaker. The aim of Berlinale Talents is to encourage collaboration among the ‘Talents’ and once you are part of the exclusive Berlinale family you should make the most of it. I know I will! 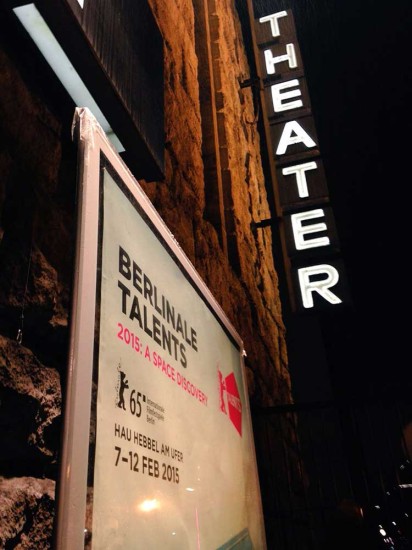 LCF News: Tell us about the work that was selected and the inspirations behind it…

GL: I sent my application with all my short films and fashion films but I did make a selection of footage from my latest short film ‘OUT’ which was also part of my Final Major Project at UAL / LCF. I also had to explain why I had made that choice and what cinema meant to me as a person and as a director in the future. It was overall a very personal and honest application.

OUT is dramedy / LGBTQ short film about Mary (Jeff Kristian), who is a divorced middle-aged mother living in a small English town. One weekend she receives the visit of her closet-emerging son Oscar (Oliver Yellop). How will Mary make sense of her son’s coming out and the small-town mentality that surrounds her? Blending high-drama theatrics with black comedy, OUT is a coming out story unlike any other you have seen before.

The inspiration came from different coming out stories from people that I knew, including mine. They all had similarities that I found dramatically funny in order to write the script. The reason why I chose a male actor to play a single mother is simply because in my opinion, single mums play both roles in a family: the mother and the father.

Still from Gsus’ film ‘OUT’

LCF News: What inspires you when creating your films?

GL: Inspiration is everywhere really. Sometimes it’s something I see on the street, someone on the tube, stories I hear, read, get told… Then I mix it with music and the story starts to unfold in my imagination.

LCF News: How did it make you feel to see your work selected?

GL: To be able to see the film finished is already a success, but the real success comes when it’s also selected at festivals and appreciated by others. Hopefully films find their audience little by little. It’s a wonderful feeling overall. Otherwise you would never feel that your work is good enough to be seen I guess!

It’s also very interesting to see the reactions of an audience and have some feedback about what they like / dislike of the film, which scene or character they connect with, or make them cry or laugh. You can learn a lot from that too.

LCF News: What are your future plans?

GL: I am writing a new script but it’s still at an early stage, I’m mapping ideas, writing a few scenes and doing a lot of research. Once it’s all clearer I will collaborate with a producer for the first time and will apply for funding to make it possible. I would like to challenge myself and make bigger projects every time.

Although my more immediate plans are to keep on going to festivals with my short film ‘OUT’ and expand my network. It’s been a great learning experience so far. Everything’s new and exciting for me. Every experience is different and that’s exactly what I love about filmmaking.