LCF News caught up with Suzi to try and get the inside scoop on what it was like to work on such an iconic film franchise (not easy when she has been sworn to secrecy), and to find out what inspires her creatively…

LCF news: What have you been up to since you graduated in 2013? We hear you’ve been getting up to a great variety of projects for some major brands and films?

I have been very lucky to work pretty much back to back on projects since I graduated. My first job was on a Norwegian zombie film called Dead Snow: Red Vs. Dead making prosthetics which was great fun as the film is full of gore effects. After that, I spent 5 months working for English National Opera in their props workshop.

I’ve also done a variety of independent commissions both on my own and with other LCF graduates. The most exciting client among these commissions has to be Selfridges. They had hired Danny Hyland, who was also in my class at LCF, to design props for their instore Christmas displays. A group of us from LCF then started making the pieces he had designed for the London store and Selfridges liked them so much, they expanded the project to all stores nationwide! Most recently, I have been working at Creatures Inc, a studio run by Conor O’Sullivan who is a very inspirational guy to be around. Mostly known for prosthetics, he has been Oscar-nominated twice and is responsible for Heath Ledger’s infamous Joker makeup.

LCF news: We hear you were involved with Star Wars? Tell us more about that…

SB: Well, it’s tricky to talk about it because of confidentiality since the film has not been released yet, but yes I was unbelievably lucky to work in the Creature Department on the new Star Wars film. I can’t say what I did, but one of the things I worked on did actually appear in the trailer which was so exciting to see!

It was such a great experience as a whole and demystified the filmmaking process to some extent, but it was still so magical to me.

I also got to help out onset which was a dream come true, not least because I’m a huge Indiana Jones fan and seeing Harrison Ford in the flesh was pretty cool. It was a great learning experience though as there’s a certain etiquette to adhere to onset and above all you just have to focus and do whatever you can to make the shoot go smoothly.

Most importantly for me was to make sure the performers were happy and comfortable at all times. Creature suit performers are extraordinary people who have to put up with heavy, hot costumes in difficult conditions, so we have to prioritise their welfare whilst always giving them the space they need to give a great performance. LCF news: What inspires you about what you do?

SB: It has to be the fact that I now have the skills to make anything, anything that someone can imagine. It’s the challenge of that which excites and inspires me, particularly when you bare in mind the effect it might have on an audience member.

I’m also very much inspired by the fact that what we do is a craft, with much of it rooted in artistic techniques that have been practiced for centuries. Its great to keep those more traditional skills alive but also to juxtapose them with emerging materials and technologies which are just as relevant and fascinating to learn.

LCF news: What does your working day typically involve?

SB: I have to say that thus far, no day has been typical! But generally speaking, I’ll be working in a workshop, normally starting work at 8am and finishing at 6pm. However, if a deadline is looming its not uncommon to work late in order to get things done.

When I’m in a workshop, I’ll either be working on making something on my own or as part of team. As I am still junior, I will often be assisting someone more senior who will teach me new skills and materials as we work on something together. Luckily, I have been employed in a variety of departments so I have done sculpting, mould-making, fabrication and finishing, so as I say, no day is really typical for me at the moment. I prefer it that way so that I can learn as many different things as possible and have a broader range of skills. 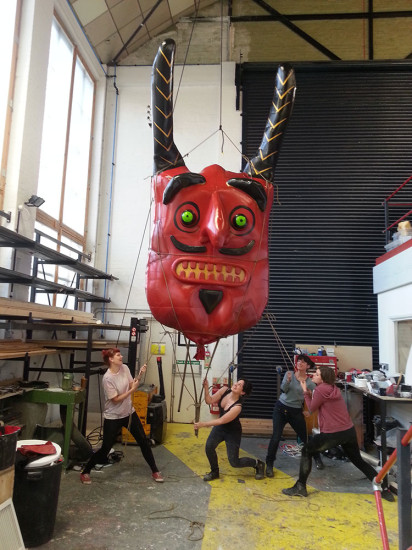 LCF news: Do you have any tips for prospective students?

First of all, I would say that don’t think you’re not “right” for the course you want to pursue. I had huge doubts over whether I could do the course in the first place, so much so that I almost left the interview day halfway through thinking that I might be wasting their time because of my lack of artistic experience.

If you feel strongly enough about it, then you should be doing it.

We can’t wait to check out Suzi’s designs when the film is released!