LCF alumna Rebecca Tuite, MA Fashion Journalism, has launched her new book Seven Sisters Style, which explores the American preppy look popularized by US college girls, and builds on the research she did for her MA final project. LCF News caught up with Rebecca to find out more… 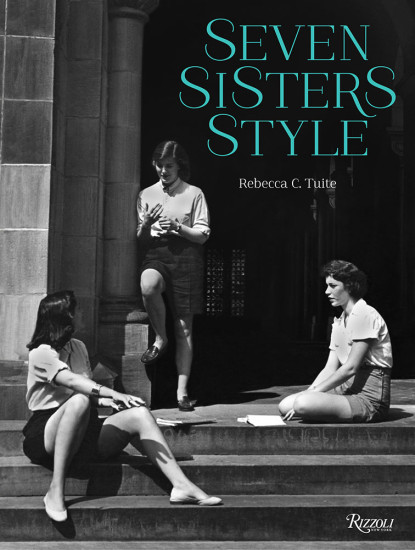 LCF News: What is ‘Seven Sisters Style’ all about?

RT: Seven Sisters Style is the first book to explore the history of the women’s all-American preppy look – a style popularized by US college girls. The Seven Sisters Colleges were a prestigious group of American colleges, founded to be the women’s equivalent of the then all-male Ivy League schools, whose members include fashion icons such as Katharine Hepburn, Jacqueline Kennedy, and Ali MacGraw. In 1935, Harper’s Bazaar announced that, “[The college girl’s] contribution to fashion is as American as Coca-Cola, baseball and hitch-hiking,” and it is true: From jeans and baggy shirts to Bermuda shorts and blazers, soft Shetland sweaters and saddle shoes, not to mention sleek suiting, pearls and cashmere twinsets, the Seven Sisters women pioneered a way of dressing that is still hugely influential today.

LCF News: What inspired you to write ‘Seven Sisters Style’?

RT: I was lucky enough to study at Vassar College in 2006, and I’ve been writing and researching about the colleges, their histories and style ever since! I grew up in England, and while I knew about a few iconic Seven Sisters women (Jackie Kennedy attended Vassar, Sylvia Plath went to Smith), it wasn’t until I was immersed in life as a Vassar student that I started to become obsessed with all aspects of Seven Sisters history. I wrote my Masters final at LCF on the idea of the “Vassar Girl” in the 1950s, which became a cultural history of the college in the last full-decade of all-female education, and from there, it was a natural progression to think about the other six colleges and their influence and history.

As a fashion historian (and, at the time, a fashion journalist), it did not take me long to realize that so many aspects of fashion today are clearly derived from various on-campus trends – especially this American preppy style that never goes out of fashion and has enjoyed a real runway renaissance in recent years, especially in terms of menswear and the “Ivy League Look”. And of course, there are all these style icons, from Ali MacGraw playing Radcliffe girls in movies like Love Story and Goodbye Columbus; to Betty Draper, the Bryn Mawr graduate in Mad Men; and even Baby in Dirty Dancing – we know the style, the garments, and can recognize so many real-life and fictional style icons from the schools, but the Seven Sisters connection sometimes gets lost along the way. So I wanted to give some real credit to the women of the Seven Sisters for their enduring influence on fashion.

LCF News: What were the highlights of creating the book?

RT: I loved going to each of the colleges and spending time in their archives looking at student diaries and guidebooks, photographs, letters, campus newspapers. I’ve loved interviewing graduates of the colleges – I wanted the real experience as well as the popular fashion media representations. I also spent time talking with fashion designers, looking at designer collections over the years and worked my way through fashion magazines from the last century! Perhaps most exciting has been working with actual garments at the Seven Sisters schools, and being able to touch and examine actual blazers, shorts and blouses and see even more clearly how these clothes influence fashion today. All of this made writing the book a dream!

LCF News: What were the challenges?

RT: I think, like most writers, I wanted to be able to include so much more – More images, more stories, more history! So a real challenge was working out what parts of the story to tell here in this book, and which aspects of the style to focus on (because inevitably, in a book of this nature, not every nuance and sub-culture of campus style could be included at length, although they are all fascinating!). Ultimately, telling the women’s side of the mainstream, preppy, Ivy League style story was most important, especially as it was not being covered at all in the many, many books about the men’s preppy look. And what’s great is that I can continue to work on other aspects that don’t get coverage in the book in my other academic work.

LCF News: What advice would you give to anyone aspiring to write their own fashion history book?

RT: I think identifying what’s missing in the current marketplace is vital. I noticed an increasing number of books about the Ivy League style traditions, and preppy menswear, but nothing for the women’s side that followed the style’s transition from campus to mainstream. So it made sense to fill that gap. And more generally, I would definitely say that you should enjoy the whole process – embrace all the different paths your research can lead you on and speak to as many people and fellow fashion historians as possible – all of this makes your work so much richer and makes the experience so rewarding.

LCF News: How did your course at LCF help equip you to undertake such a challenge?

RT: As I mentioned, I wrote my MA final project on the style and culture on campus at Vassar College in the 1950s. I interviewed hundreds of graduates and travelled all over the US researching the project, which is now the subject of the academic manuscript I’m currently revising, Vassar Style: Fashion, Feminism and 1950s American Media. The research process, the contacts I made during my MA, and the support of LCF staff all set me up for continued research, and made Seven Sisters Style a natural progression.

LCF News: What are you up to now and what are your plans for the future?

RT: I’m currently pursuing my PhD in Decorative Arts, Design History and Material Culture at the Bard Graduate Center in NYC, which continues to be a challenging and rewarding experience. I’m revising my academic manuscript and working on a second coffee-table fashion history book, so I feel very fortunate.