LCF academics go Gaultier and Beyond at the Barbican Centre 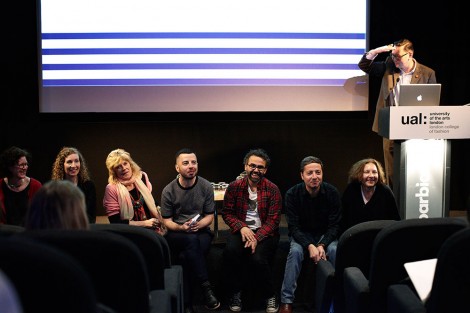 LCF academics present Gaultier and Beyond at The Barbican

LCF News joined seven speakers from LCF at the Barbican as they explored Jean Paul Gaultier’s work and the ideas surrounding it for ‘Gaultier and Beyond’. The pecha kucha style talks drew inspiration from The Barbican’s The Fashion World of Jean Paul Gaultier, and the Fashion Space Gallery‘s JPG: Be My Guest.

Academics explored concepts of ‘otherness’, cultural, and international influences on his iconic designs, for both film and fashion, bringing together a whole variety of ideas dawn from their different disciplines.

Pamela gave an insight into Gaultier’s interest in film and costume design – an aspect of the desinger’s career which feature in the Barbican’s exhibition. Gaultier designed costumes for a number of films, including The Skin I Live In, The Fifth Element and The City of Lost Children. Pamela explained:

“Gaultier often referenced previous work by other designers, or himself, when designing costumes for films; for example, The Fifth Element contains many design references to the film 2001: A Space Odyssey.”

Natascha, on the other hand, felt that Gaultier’s tendency to ‘reference’ was troubling as he had a tendency to “exotify” other cultures. She referred to Gaultier’s ‘The Great Journey’ (A/W 1994-5 collection) and explained that in the West we tend to associate creativity with newness, experiments and change, often leading to designers taking ‘inspiration’ from ‘Non-Western’ cultural dress:

“Often, we borrow from the Orient, this imagined idea of communities produces beautiful artifacts, but may also exotify ‘other’ cultures.”

Looking at Orientalism in Gaultier’s work, Serkan explained that his designs helped eradicate the artificial borders between East and West:

“Gaultier blurs artificial boundaries between East and West, he believes that we live in one and the same world […] People dressing up as the ‘Other’ is a way of becoming the ‘Other’, as well as embracing ‘Otherness’.”

Itai went on to descirbe how Gaultier is one of only a few openly gay French celebrities in the industry and how he uses this to his advantage, manipulating concepts of gender and sexuality in his work:

“Gaultier evokes the current insecurities of male masculinity; his perfume presents the male body as sexual object; Gaultier’s adverts feature tattooed, muscular sailors. However, the tattoos are deliberately badly done, as if a spoof of the gay man dressing up as the straight man.”

To end the evening, Djurdja described how Gaultier’s work in the 1986-87 A/W collection was inspired also by Russian Constructivism:

“Western designers embraced the geometrical patterns, seduced by its bold aesthetics. Although constructivism tried to abolish bourgeoisie, it entered a new state of luxury, via the new correspondences between East and West, as it was seemingly in tune with the Western Modernist style.”