In the studio with menswear and tailoring emerging stars Gučas Morgan

Gučas Morgan have been working on something special in their little slice of west London. Made up of Elena Gucas and Will Morgan, the pair started as collaborators at London College of Fashion before turning that bond into a civil partnership, launching their independent brand focused on embroidery design and decorative tailoring soon after, making use of their degree’s in BA (Hons) Bespoke Tailoring. 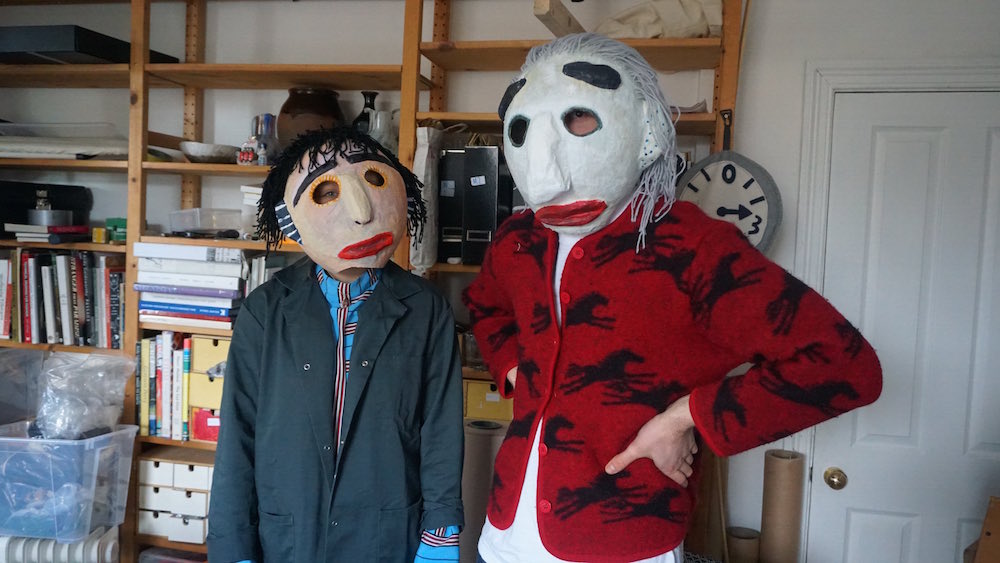 In the studio with menswear and tailoring emerging stars Gučas Morgan.

We were recently invited to their studio in Acton, but Will prefers to say Shepherd’s Bush to make it easier for people to find them. Elena is a Lithuanian artist and designer who studied at Royal Academy of Fine Arts Antwerp for three years before her tailoring course. Her drawings and paintings are the blueprints to their vision each collection, if she could, she’d “paint and draw” all day and every day. Her paintings and art are a huge part of her identity and the brands. Her work is scattered all over their studio. She jokes about wanting to study Fine Art originally, but her mum said there will be more money in fashion, something she is struggling to believe at the moment as a young independent brand operating from their parents home. She recalls Belgium being a very abstract education, centred around creativity but missing the practical elements needed to put a collection together. This spurred her decision to relocate back to London and learn the technical aspects of turning a design into reality. Here’s where she met Will.

Will is a born and raised west Londoner that considers every inch of his work and lives off the buzz of designing and showcasing. A shirt-making course with Winston at Mare Street, part of our Outreach programme, during college sparked Will’s interest and ultimately lead him to study tailoring. Will was one academic year below Elena, they met during her final show when they were paired as ‘buddies’. They hit it off straight away, got married, and knew they wanted to start something together. I ask if it was easy settling on the brand identity, Will replies, “It was tricky from the beginning, Elena is really into her womenswear, embroidery and glitter. I was doing more menswear and handknitted pieces, so we weren’t really sure what we were meant to do together. But then we settled on menswear because it was coming up to my graduate show.” 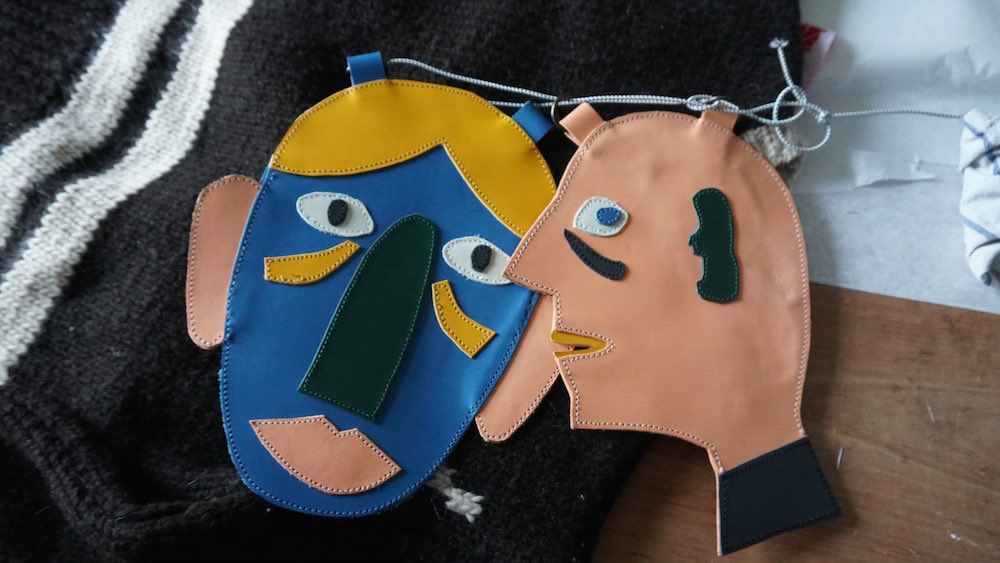 Will and Elena met on the BA (Hons) Bespoke Tailoring course.

The brand has been going for over a year now. After Will’s graduate show, Japanese buyers approached him about an order after taking a shine to the designs but weren’t able to commit because of how expensive the jackets were due to the hand knitting techniques used. Will and Elena took this advice on board and started working on a more commercially viable collection for buyers and stockists. The wholesale price for each jacket was nearly £2000 as each piece was handmade. Coming from tailoring where you sometimes spend three weeks creating a pocket, making the leap into a more commercial product was a new ask for Will and Elena.

To makes things harder, they were sourcing materials at the same time as Brexit. They were on the verge of purchasing fabrics from Europe for the new collection, then the Pound slumped by almost a third overnight. They made the decision to use English cotton and mills, only using five different colours, the collection ended up being made of Scabal. The same fabrics were going to be used for their next collection, so they spent a lot of time and energy on sourcing and experimenting. 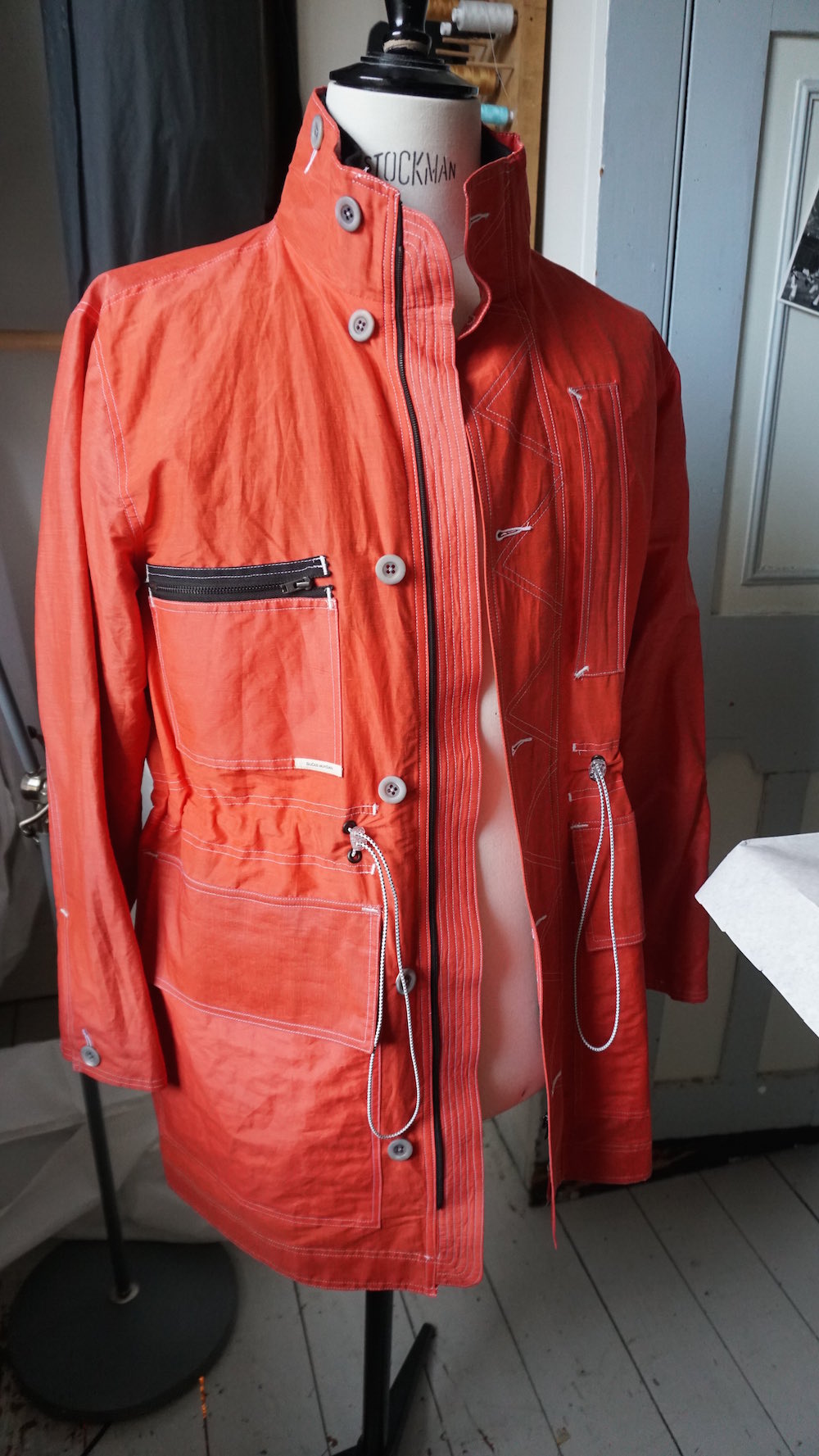 The pair took their portable presentation to London Fashion Week Men’s in January.

Fast-forward to London Fashion Week Men’s 2018, Gučas Morgan were ready to showcase their latest collection but without a secured space. Elena says they were looking at spaces in London Bridge or places further away, they didn’t want to commit thousands to renting a space outside of central London and risk no one showing up. It would have been a big risk and gamble, explains Will. Because of companies like Airbnb and Appear Here, the world has caught onto the fact that even a wardrobe in central London is worth money to someone, especially during fashion week.

Without a PR team and only an old press list from their internships, they couldn’t get anything concrete and nobody would confirm their attendance – the story all new and emerging brands face. Not wanting to stand in a cold and empty gallery in the middle of January, Will and Elena called on their friend Boc for help. Boc always does their production installations and recently got a license to drive heavy vans. With this in mind, Will thought, “Why not just park in front of London Fashion Week Men’s so everyone could see it even if they didn’t like it”. 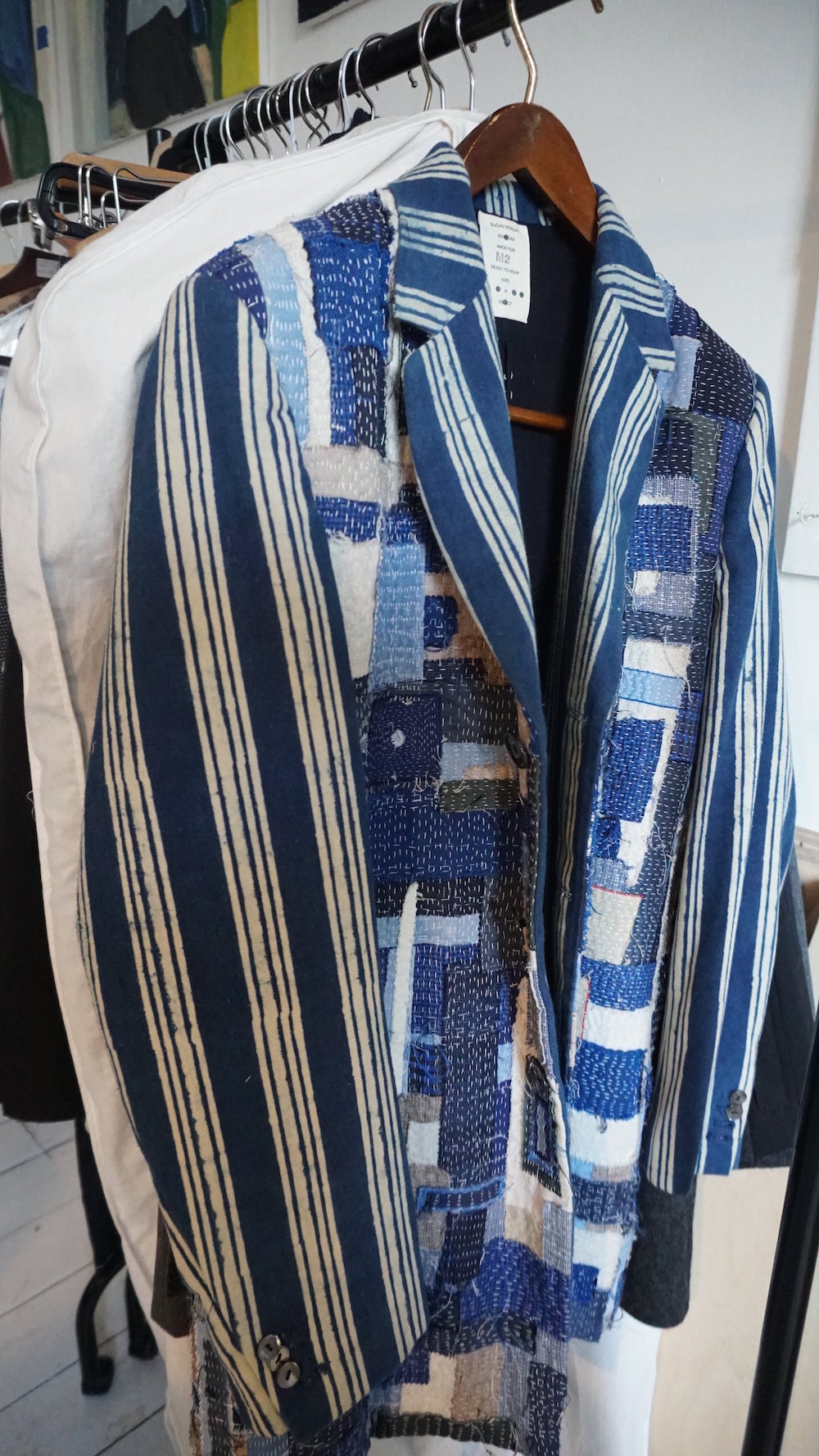 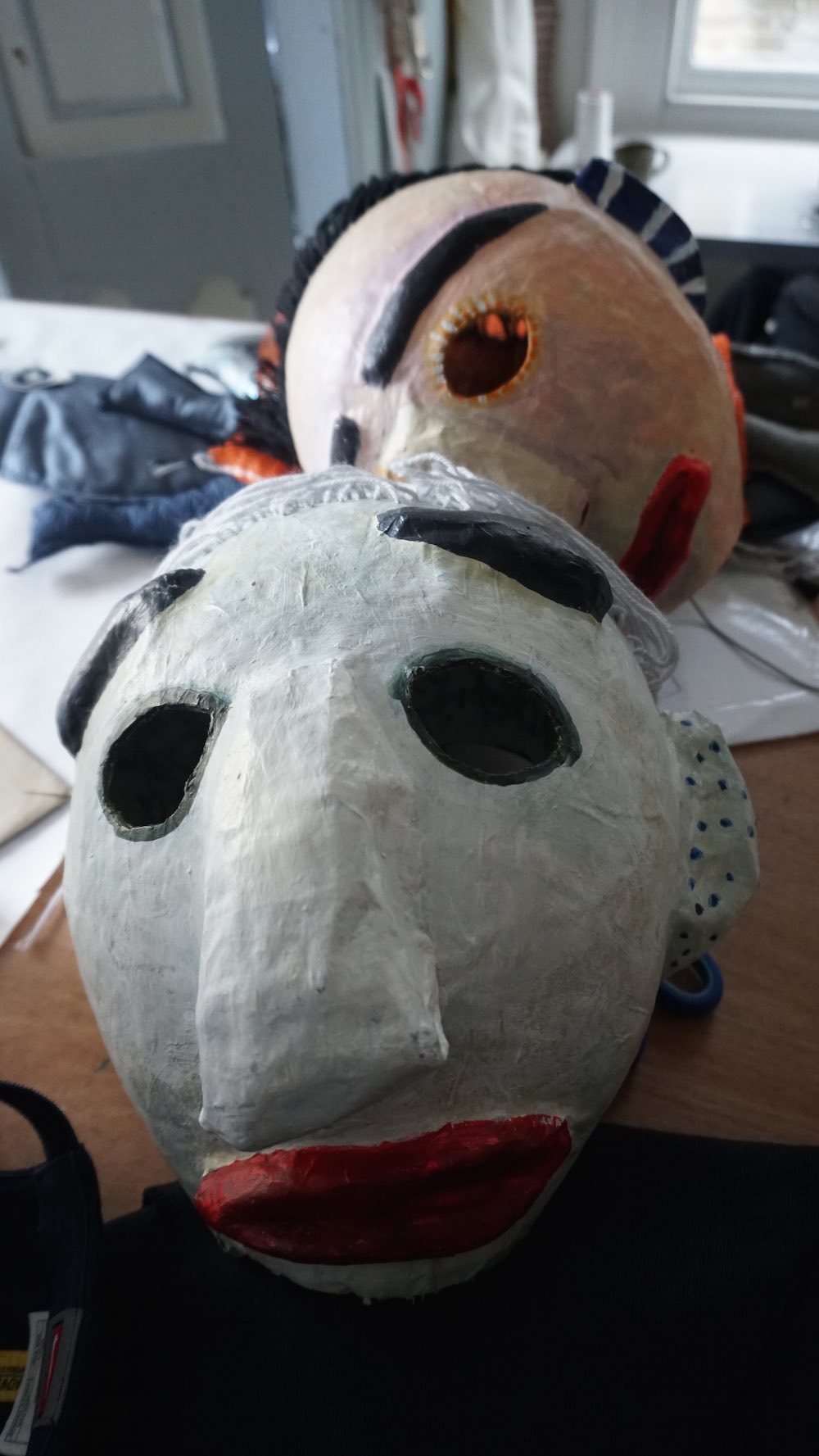 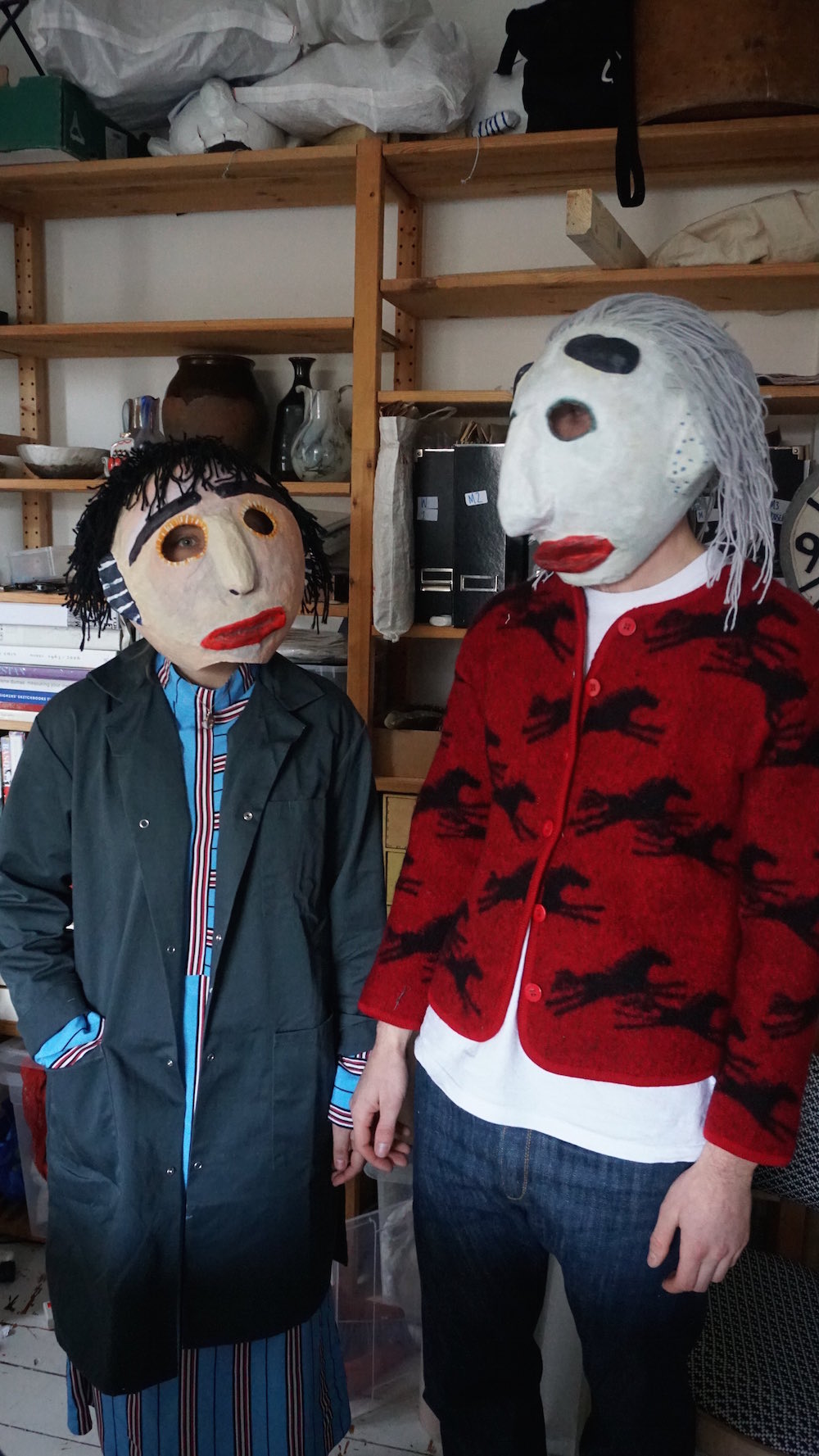 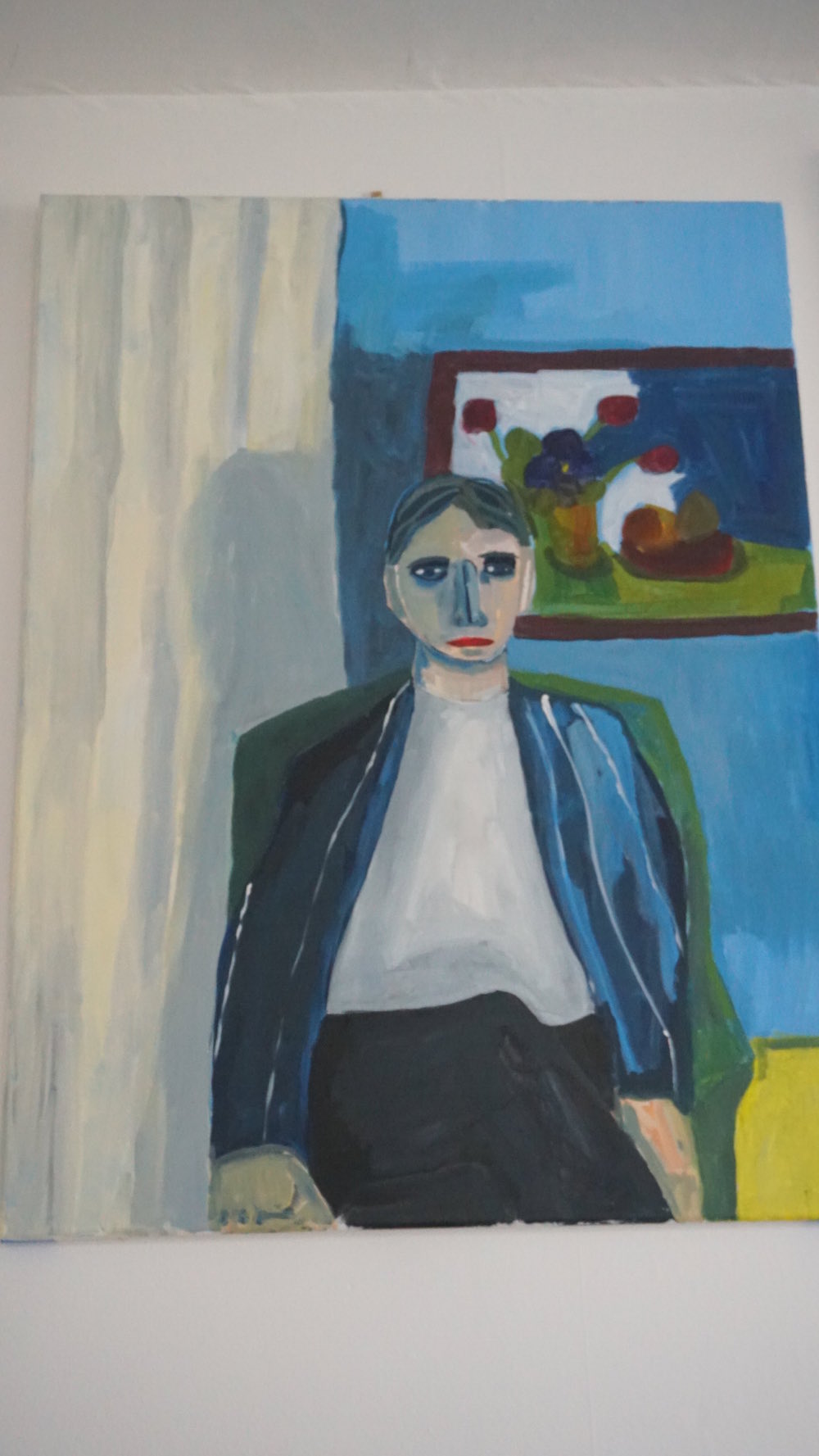 “It’s funny because we parked across the street from all the shows, no one saw it and no one came. It was only 30 meters away from the front door but no one came. So we decided to cross the street and park directly outside. Straightaway we noticed a big difference. You really have to be in front of the people to get noticed! We saw a BIG difference in people taking an interest,” explains Elena. As they didn’t have a fixed address, they sent out a live location tracker with the e-invite that followed them for the week, including the time they were working at the studio and travelling around Acton. Will told us, “There’s a reason why people don’t invite others to places without a fixed address. On the invitation, we had a direct link to our current location so they could see where we were at all times but you can’t switch it off on your phone. We had a friend in Belgium who checked-in and messaged saying why are you in the middle of nowhere in Acton, so people could see everything we were doing during the week before the presentation”. Will and Elena in their studio. 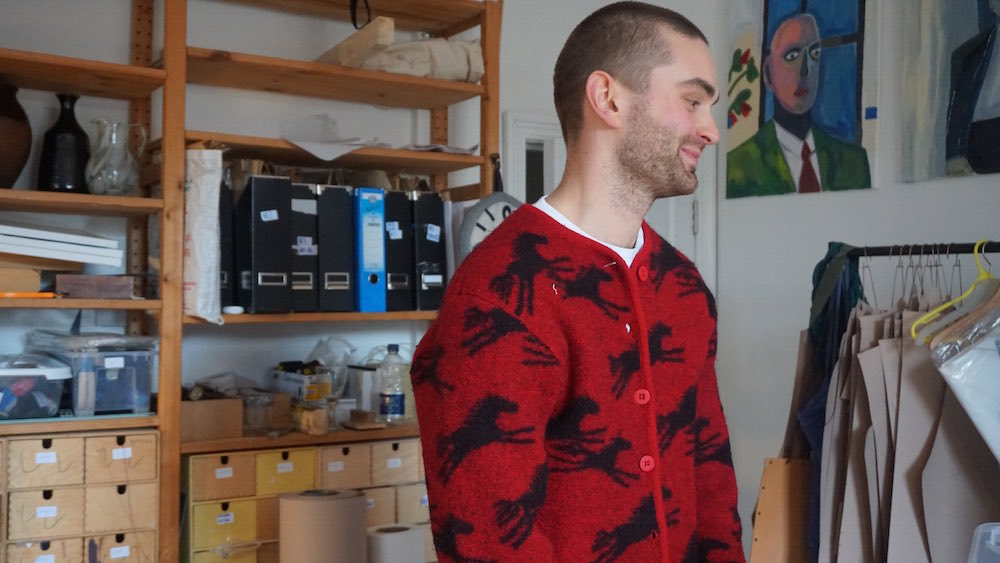 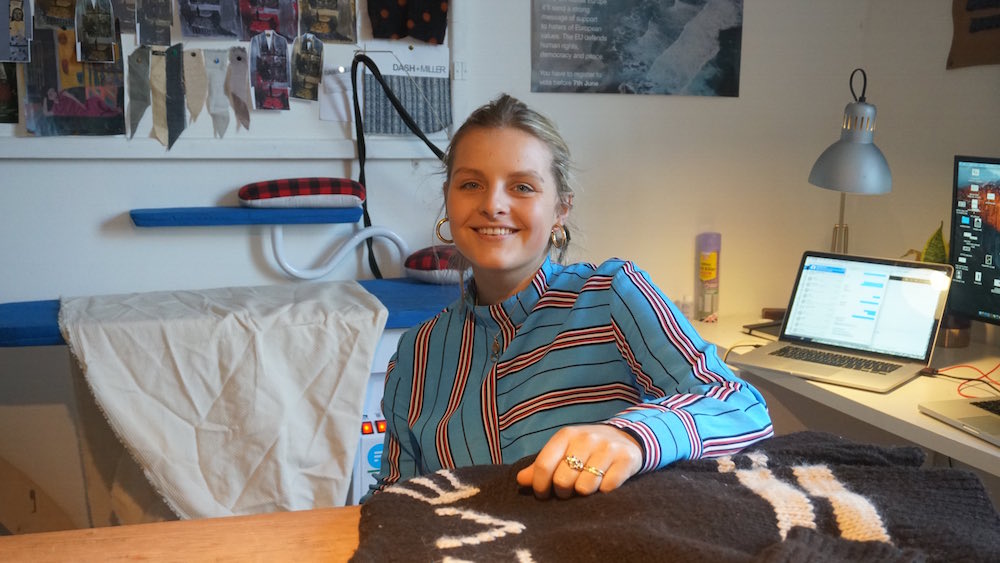 Elena working on samples at their studio.

Gučas Morgan made a lot of noise during fashion week, but they took on the advice of the former Japanese buyer’s about making a more commercial collection. Finding the sweet spot between something creative and commercial can often be the hardest obstacle for new designers. Will and Elena managed to catch the public’s attention with the portable presentation in January, but the collection was too commercial for most buyers. This lead to them both going back to the drawing board, questioning the vicious cycle of producing an AW to SS collection under the strict calendar of fashion week.

Will and Elena work and live in the same house, their bedroom is only 10 metres away from the studio. They basically spent all their time in the bedroom or the studio working on the collection. They went into overdrive and locked themselves away from the world. Following in the footsteps of designers including Gosha Rubchinskiy most recently, Will and Elena want to move away from the strict fashion week calendar and focus on “smaller projects and at a slower pace, just because it’s impossible for us to keep up with producing big collections every six months,” says Will. 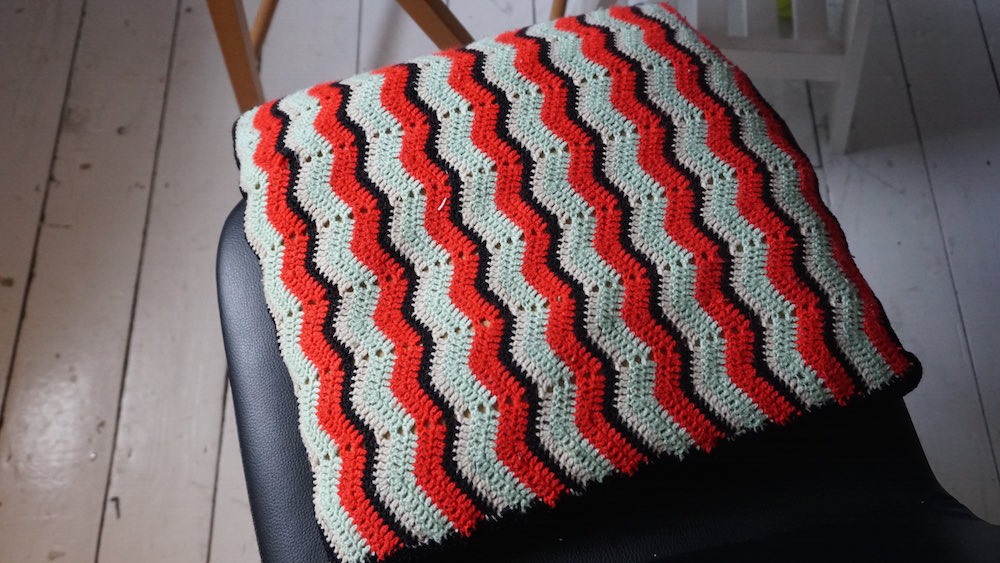 The vision is now to produce on a smaller and slower scale, getting themselves out there more with a series of pop-ups and workshops, plus working with a few different handweavers and machinery. Gučas Morgan is all about quality, that’s what they are selling, so they want to make sure each piece is special. Mass producing jackets at the moment might lose some of the charms, Elena explains. They’ve just launched an online store and already have some costumers returning which they are very happy about, especially as the items aren’t cheap and they aren’t established yet. They’ve managed to get the pricing to where they want it, roughly for £400 for a jacket. “We didn’t do any wholesale accounts. So as soon as you do that, the market-up will really hit you. We need to get the quality in front of people to show them the quality, that’s why we need to keep doing pop-ups and events,” they tell me.

Starting a brand straight from studying was always going to be difficult, Will and Elena both knew that. They often have days where they think, “Should we just pack it all in and get a nice design job for a high-street brand”. But they both agree that isn’t them. The excitement of putting their designs into practice and then showcasing it is what keeps them going. They say the brand is like a dangling carrot that keeps them going, even previous experiences at Craig Green, Celine and Thom Browne didn’t excite them the same as Gučas Morgan does. They are already talking to production factories in Lithuania and even Belgium, the plan is to be closer to them in the future, so moving abroad is the longterm goal. 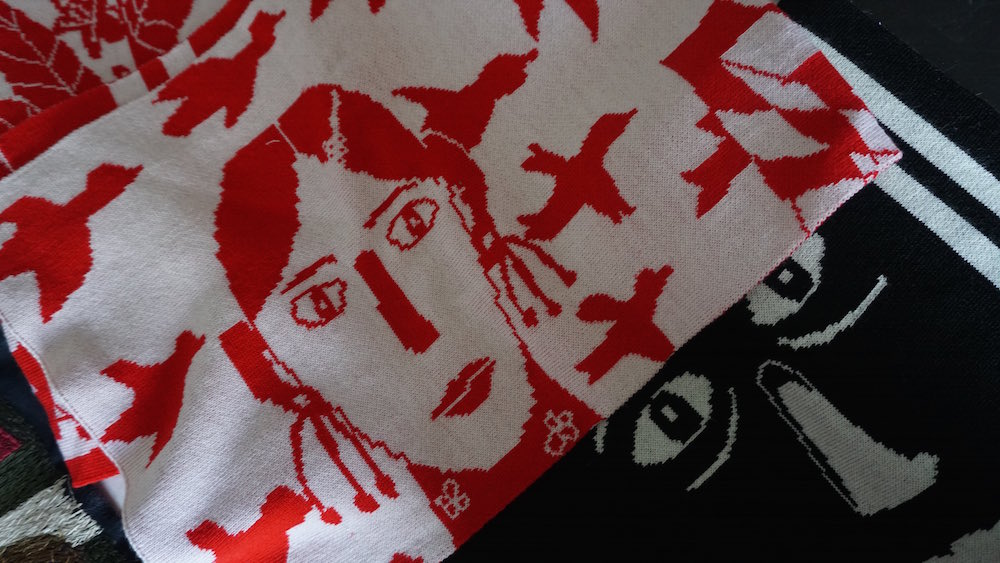 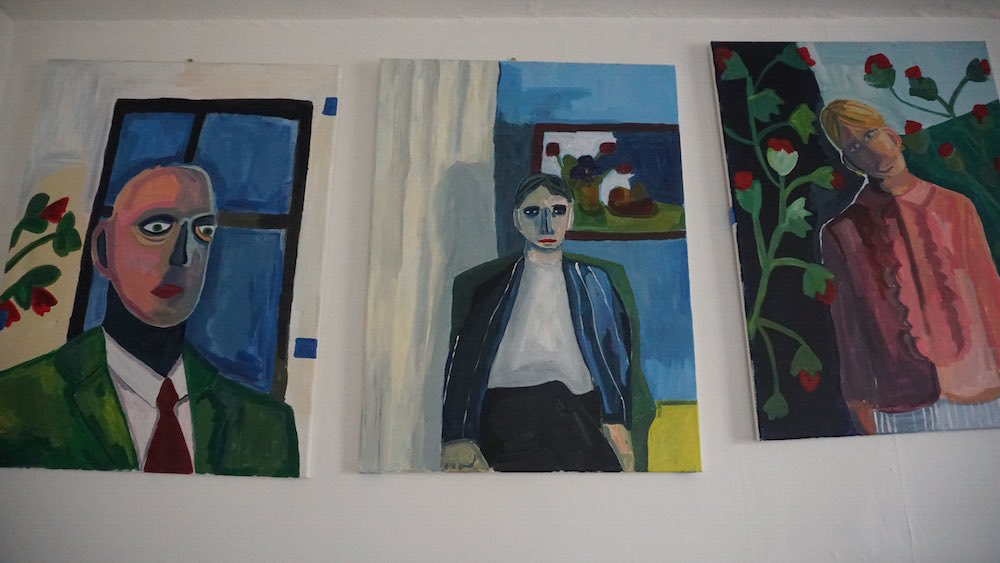 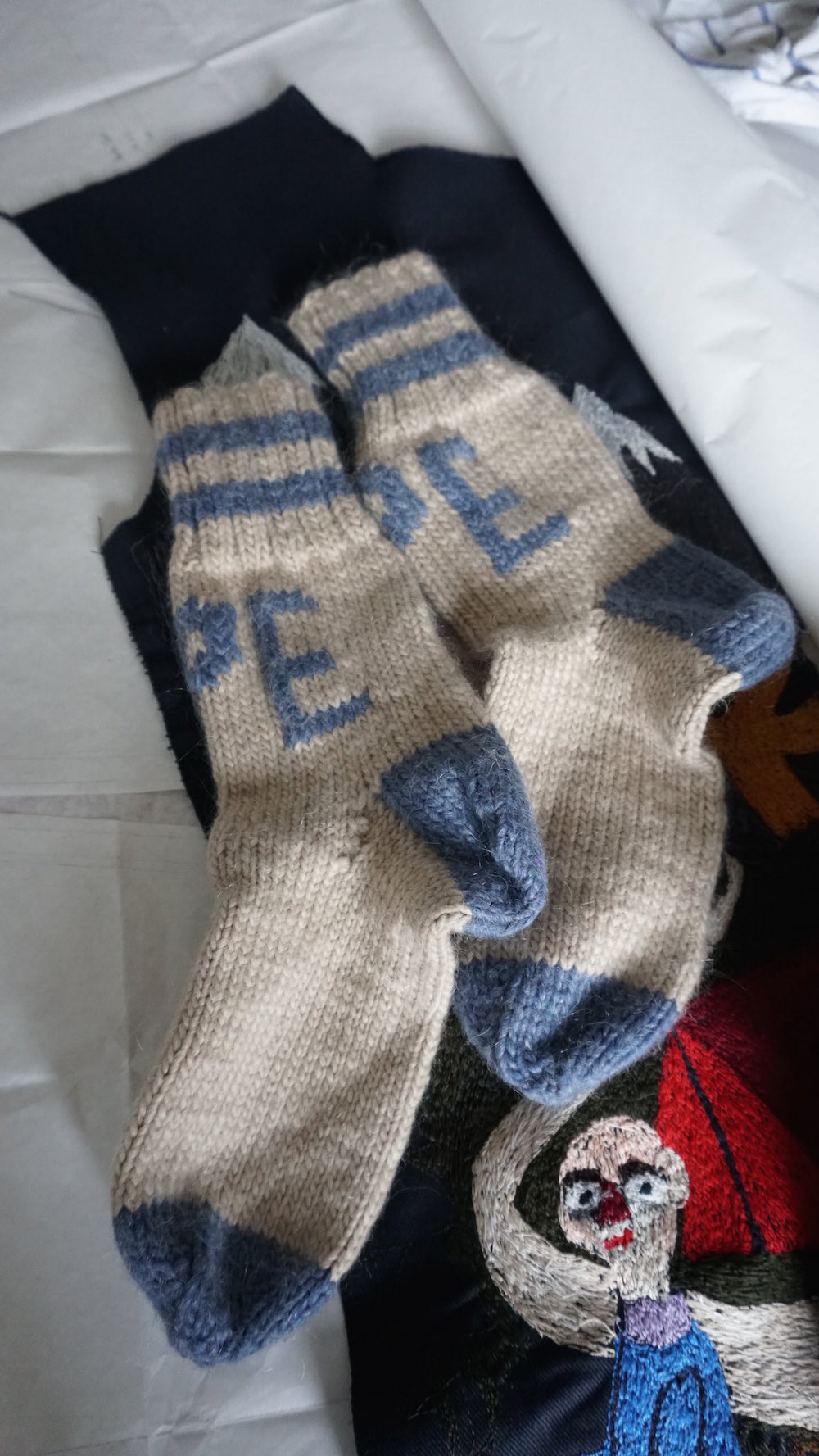 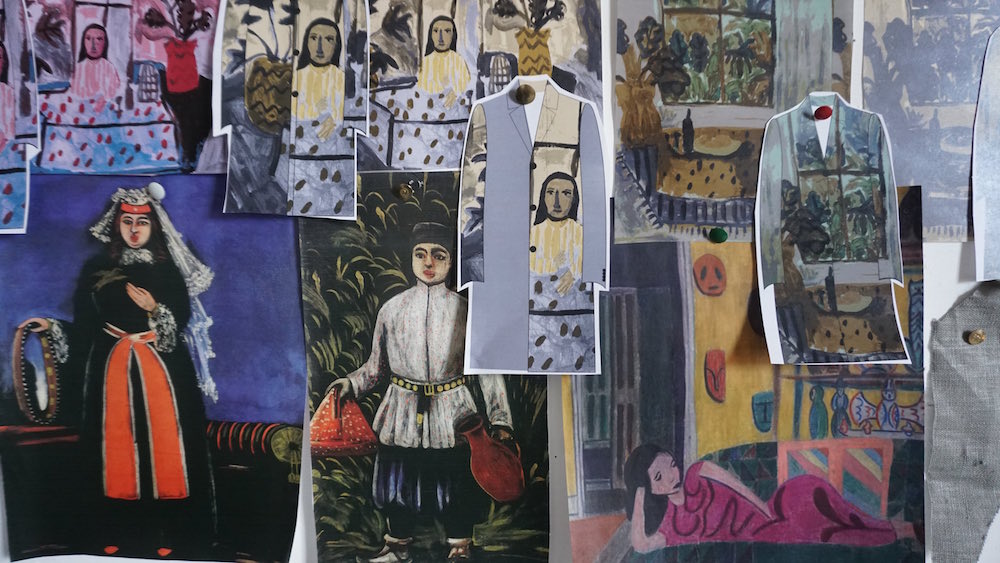 The plan is to have complete control of the brand, weaving their own fabrics and making the buttons too. Will’s grandparents have black Welsh mountain sheep, which they want to weave and sheer themselves for the next collection. Weaver Holly Ward is also working with them on the next collection. Elena created a lot of domestic drawings while on her climbing trips to Siberia and Georgia. These drawings will be printed on the jackets and garments. LCF alumnus Kojey Radical recently wore one of their pieces on his Apple Beats Radio appearance last month. They want to work with people that will help the brand grow, but they also want to make it feel genuine. Although if A$AP Rocky put on one of their pieces and sold millions of garments, then they wouldn’t complain either. Gučas Morgan has the blueprint to be a real success and recognised, getting themselves seen and tackling the fast-fashion cycle is the biggest hurdle they have to overcome first.