More MA Costume Design for Performance in the LCFMA17 Graduate Spotlight series – this time with student, Chiara Vicini. Chiara is originally from Rome, Italy where she studied the Science of Fashion and Costume at University La Sapienza. Here, Chiara tells us more about her work.

My final collection… is called Weaving Your Own Skin. The idea wants to communicate the ban of certain classes through slavery, enlighten the woman’s state and analyse the culture of weaving. 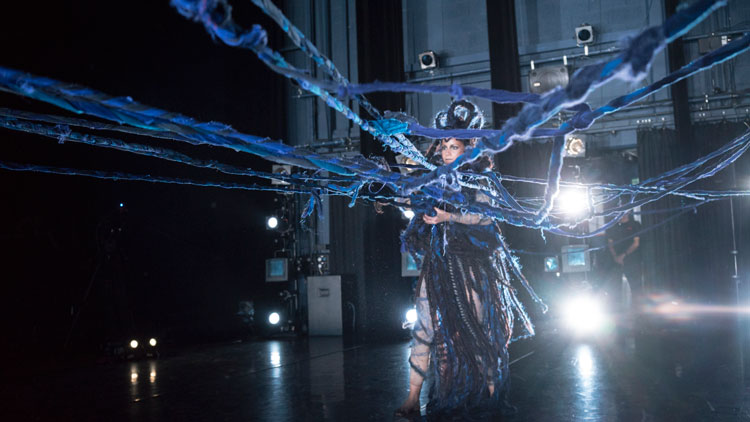 Weaving Your Own Skin by Chiara Vicini. Photography: Paul Bevan

I researched… for months about the meaning of weaving in ancient cultures, and I chose to represent the myth of Arachne. The act of weaving is the crucial theme of the performance. The web became the main focus of this research: it wasn’t just about the of the Myth of Arachne itself though, but also the journey of an artist across their life, and how the benefit of being skilled and talented becomes a curse. I used hair for the costume to give a more realistic look rather then a mythological and imaginary one . The performer actually makes an installation on stage – this idea came from looking at contemporary artists who used this form of art, as an alternative to the effects of mass-media tv, mainstream film and magazines.

My top tips for prospective students are…work hard and follow your instinct, but always be willing to accept critique and learn from it. Also, never give up!

I chose LCF because… it has the best courses for costume making. It allows students to explore both theatre and film, and most importantly it gives us the possibility to experiment and learn new techniques.

The highlights were… the course itself – it is very well thought out, and lets students learn amazing new techniques and it pushes you to go beyond your limits.

And the biggest challenge… Unfortunately, 15 months are not enough and often we were put in very tough situations of high pressure.

The best thing about studying in London… is that it gives you a lot of opportunities, it is the city where designers can give space to their dreams. Although at the beginning it might seem tough, London is full of motivation, energy and amazing vibes. In every corner there are musicals, theatre shows, events, gallery exhibitions, street art and more. This city is so inspiring that it quickens and stimulates ideas in your brain relentlessly.

On work placements…Between my part time job and the full time MA, I managed to work for the brilliant Saju Hari – previously a dancer for the Akram Khan Company. Here, I created costumes for his own dance show Breaking Joints at Rich Mix in Bethnal Green, last May. At the same time, I also designed and made a garment for a Heir Generation model, who was competing at the Milk_Shake Live Final competition at The Grand in Clapham. 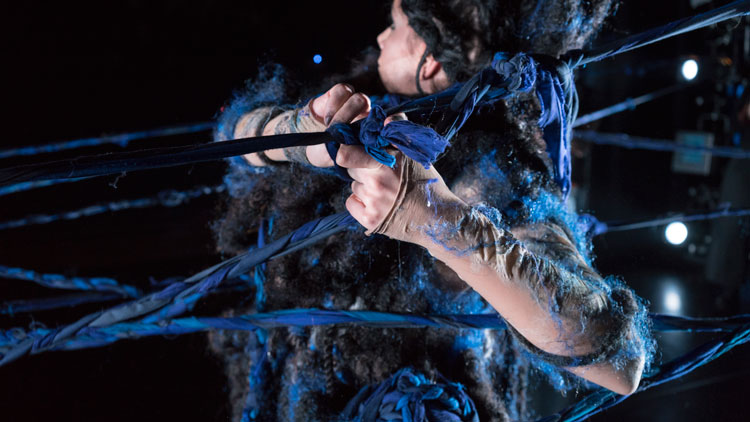 Weaving Your Own Skin by Chiara Vicini. Photography: Paul Bevan

My biggest inspiration…after this project, I understood how deeply women from the past influenced my work. Especially female artists: their strength , their courage and their sensitivity were leading them one their paths; they fought against society’s norms and prejudices, in order to achieve their aims.

In the future… I would like to start working permanently in the field, and I’d especially like to experience more in theatre. My big dream is to learn more about prosthetic techniques. Furthermore, I’d really like to learn to use all sorts of different textile arts, and expand my knowledge. This particular course has helped me a lot in understanding which things I am good at, and the ones I lack, so I will not stop learning new things.

LCF is heading east…and there are already many students living in Stratford, so I think it might be a good solution – especially because this area is way cheaper than central London so more students will be able to afford to live closer to the campus.