Third year BA (Hons) Costume for Performance student Jessica Iliff did her work placement at a film costume studio in Holborn. Part of her work experience included working on costumes for a new film called Phantom Thread, starring Daniel Day-Lewis, which is released in UK cinemas on Friday. Her role was assisting other makers and the cutter in the principle womenswear department. It allowed Jess to make elements of and whole costumes, assist on fittings and be involved in breakdown of costumes. 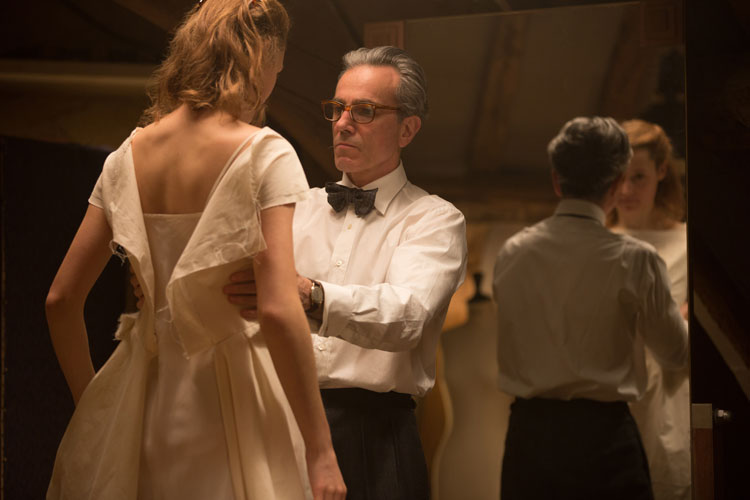 Last month we hosted a workshop for journalists to get an insight into dress making and the construction of garments, at our studios in Lime Grove (read about that on the Independent and The Culture Trip). Jess helped to deliver this workshop and we caught five minutes with her afterwards, to find out about the experience.

The top 5 things about my work placement…

Working on the film itself…

The workshops with journalists…

Set in the glamour of 1950’s post-war London, renowned dressmaker Reynolds Woodcock (Daniel Day-Lewis) and his sister Cyril (Lesley Manville) are at the centre of British fashion, dressing royalty, movie stars, heiresses, socialites, debutants and dames with the distinct style of The House of Woodcock. Women come and go through Woodcock’s life, providing the confirmed bachelor with inspiration and companionship, until he comes across a young, strong-willed woman, Alma (Vicky Krieps), who soon becomes a fixture in his life as his muse and lover. Phantom Thread is out in UK cinemas on Friday 2 February.