‘There is something eerie about a museum of costume.’ These are the words Elizabeth Wilson uses to delve into the relationship between living observers and costumes displayed in museum galleries. These garments, worn by mannequins that become more uncanny as they are meticulously fitted to each item, evoke the absence of the body that wore them in the past, or would have done so, had the garment not become a classified, untouchable museum object. Wilson notes how fashion exhibitions constitute an ‘uneasy territory’, since they ask us to imagine the body, to form a mental image of it embodied by the shapes of standardised figures which, through padding and other technical expedients, are rendered unique. The figures become the negative of the dress; the cast of the body associated to it.

Not many fashion exhibitions have focused exclusively on menswear. Although menswear – in the widest definition possible – has been featured in different shows and displays, the preference is usually to concentrate on womenswear. It is often more spectacular, and has a wider footprint in the collective memory, making it somehow more familiar to potential audiences, whose engagement is one of the factors curators need to consider. If men’s fashion has been the object of little scrutiny in curating, the relationship between clothes, the masculine body, and fashion – meaning the complex system of signs and messages related to garments and accessories – has hardly been explored at all. 'Fashioning Masculinities' recognises the urgency to redress this gap by placing the masculine body at the centre of enquiry, and as the origin of ever-changing definitions of masculinities, continuously constructed and deconstructed.

The exhibition displays the work of artists and designers who have actively engaged with notions of gender identity, and specifically ‘masculinities.’ The show also accounts for the voices - and appearance - of models and wearers, as we recognise their agency - Del LaGrace Volcano to Yinka Shonibare and Kehinde Wiley - in shifting common perceptions of the masculine (stereo)type. So, while artists, designers, and wearers are present, the absent protagonist of the show is the body, established throughout time as a series of ideals; a cast that changes form, shape, and material or, galvanised by its own metamorphoses, inevitably performed through clothing.

The short texts that follow represent a compendium of the types of gestures that evoke different performative bodies in the show, stimulated by the curatorial juxtaposition of images and objects: Posing; counting; dwelling; stomping; and voguing.

The masculine body can manifest both conformism and resistance in many ways. In Fashioning Masculinities, the recurrence of some poses, denying/dissolving boundaries between different disciplines, from sculpture to advertising, from photography to performing on camera, offers a rolling manifesto of the masculine body as political.

Strength and ‘Apollonian’ beauty are features of classical sculpture: a technical challenge for the sculptor, who must chisel musculature and posture from stone, turn an inanimate material into a graceful ideal.

From stage to set, to the catwalk and, sensationally, the red carpet, posing is also imposing, exploiting visibility to reclaim space, to expand and capture attention, to exercise power. The leg spread of the mannequin wearing an ensemble designed by Randi Rahm and worn by Billy Porter allows the cape to flow and reveal its bright, hot pink lining. Not surprisingly, Porter’s theatrical appearance made the headlines at the Golden Globes ceremony in 2019. 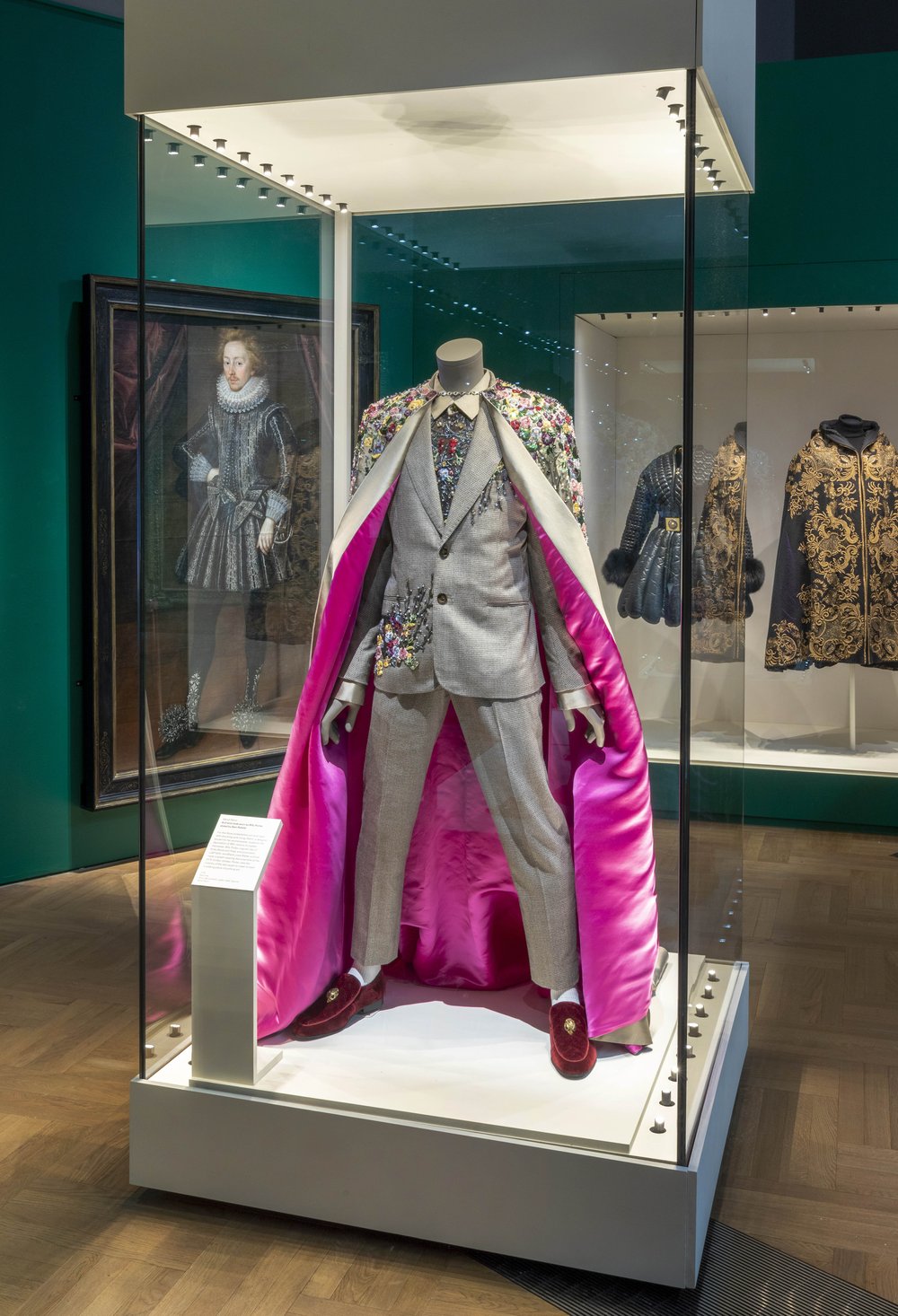 Counting is manipulation. It is also an attempt to own time. In exercise as in dance, counting is needed to regulate movement, to build a sequence of steps, to mark the rhythm of the breath. The dancers in Matthew Bourne’s 'Spitfire' count their way through the ironic and elegant choreography wearing nothing but long-johns, string vests and Y-fronts. The syncopated flow speaks to the stillness of a running mannequin wearing an outfit by Aitor Throup, and to the frozen shape of a Vivienne Westwood, a Mackintosh swirled by a gust of wind. An oxymoron that mocks time and its fictitious linearity. 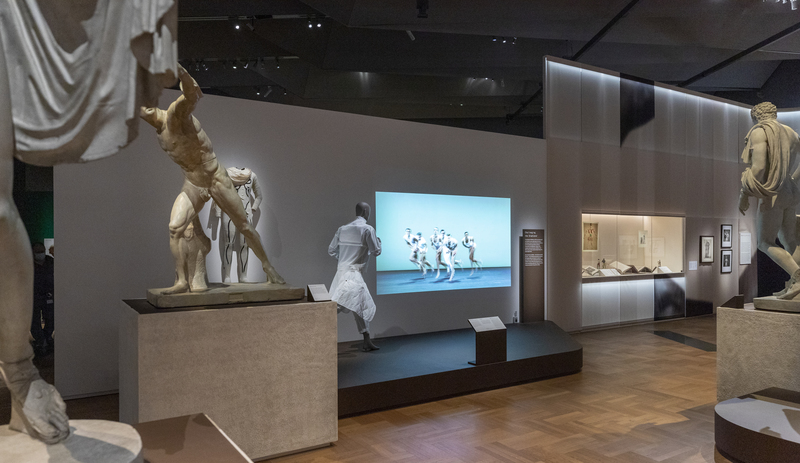 Towards the end of the first gallery, the design of the space builds in a pause, the ‘pinnacle’ from where all the different sections can be glanced at once. At the centre, a video installation by the artist Cassils, in which they use the warmth of their own body to dissolve an idealised ice torso. The rhythmic sound of the drops falling as the torso melts with every inhalation and exhalation forces us to slow our breath down too, and reflect on how definitions of fashion, of masculinity, and of the space they share are constantly de-territorialised and re-territorialised, fashioned and refashioned. 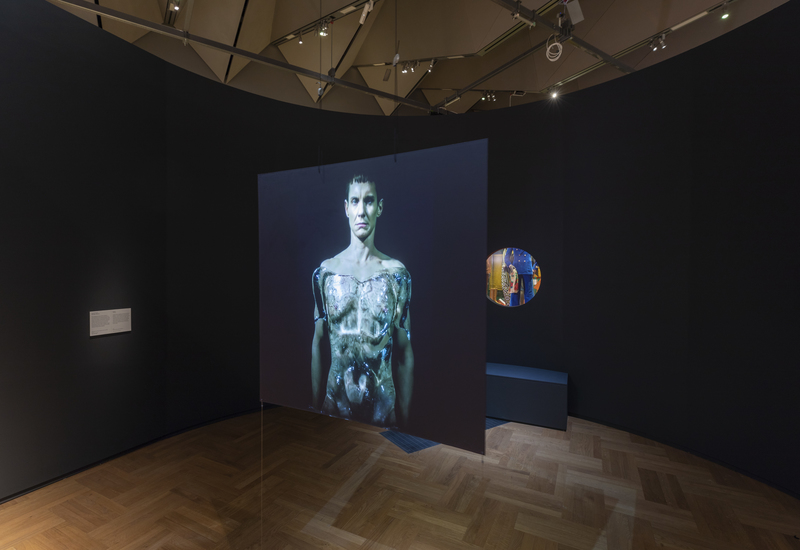 The exhibition constantly reminds us how perceptions of what masculinity means have changed over time. Clothes turning into dust, paintings fading to different shades, designers recreating silhouettes from the past, wearers appropriating garments to make statements, and mannequins carrying watches to help us count the times fashion reshuffles time. Restlessness as mutability: fashion is constantly reframed through a myriad of lenses that overlap and produce a sense of the present, through past and future references.

The restless habit of the city dweller against the backdrop of the city is bifold: an attempt to escape the claustrophobia of the greyness of the city itself on one side; a gesture associated with progress and modernity on the other. Idle walking is also associated with a precise kind of (bourgeois) masculinity, captured so well by Walter Benjamin:

“The street becomes a dwelling for the flâneur; he is as much at home among the facades of houses as a citizen is in his four walls. To him the shiny, enamelled signs of businesses are at least as good a wall ornament as an oil painting is to the bourgeois in his salon. The walls are the desk against which he presses his notebooks; news-stands are his libraries, and the terraces of cafés are the balconies from which he looks down on his household after his work is done.” - Walter Benjamin, The Paris of the Second Empire in Baudelaire. in Charles Baudelaire: A Lyric Poet in the Era of High Capitalism

The flâneur, urban dweller and ‘passionate spectator’ of the life of the city, catalyses the tension between individuality and the shadows of a crowd of bodies unified by the black of that symbol of masculinity, the frock coat, the upward thrust of the top hat, the ubiquity of the trousers, the shine of highly polished shoes, the mechanical walk.

Portraits at the Stock Exchange, painted by Hilaire-Germain-Edgar Degas in 1878-79, captures the fashionable uniformity of the bourgeois crowd, while still capturing individuality: the flaring, skirted coats, glossy top hats, and the loosely-painted figure in the foreground animate the scene, while at the centre the banker Ernest May is depicted, absorbed in business.

Miuccia Prada often reflects on masculinity as a social role. In 2012, she titled her Autumn/Winter collection ‘Il Palazzo. A Palace of Role Play’, in which she dressed well-known actors – whose bodies performed with a rigid formality on the catwalk recalling the upright portraiture of 19th-century men – to re-enact ‘a parody of male power’. A very believable mockery, but mockery, nonetheless.

The same subtle subversion is present in the ensemble by Thierry Mugler that David Bowie wore at the 1996 Brit Awards, when he performed with the Pet Shop Boys. Exhibiting this look, with its high, starched dog-collar and clerical overtones, alongside the Katherine Hamnett kitten heel shoes he wore with this ensemble, allowed us to evoke Bowie’s fluid masculinities, shifting between refined subtlety and bold performativity. Mannequins are usually static, but they can suggest movement, especially if dressed in clothes that call to mind striding, marching or parading. Here, a mannequin, dressed in a formal shirt and jacket paired with loose trousers in libidinous butter-soft black leather, walks away from the idealism of bespoke tailoring to enter the realm of high-quality ready to wear. The look was designed by Tom Ford for Gucci in 2001 and is charged with references to New York club aesthetics, prompting us to imagine an active, hypersexualised attitude, in stark opposition to the elegant, hegemonic way men were supposed to wear tuxedos in the past. 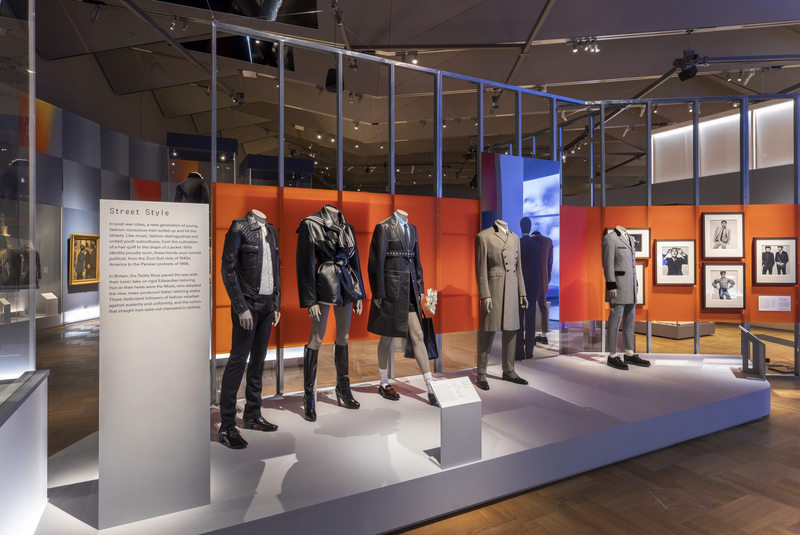 The mannequin faces a trio of ensembles that unpack the identity of the same material – leather – as well as evoking men strutting, striding, stomping around clubs, streets, even the office: biker jacket and skinny jeans reshaping the post-punk slender silhouette by Hedi Slimane for Dior Homme; a provocative subversion of Navy uniforms and high boots by John Galliano for Margiela; the reassuring dress codes of shirt and tie mixed with the fetishist strength of black leather by Donatella Versace. 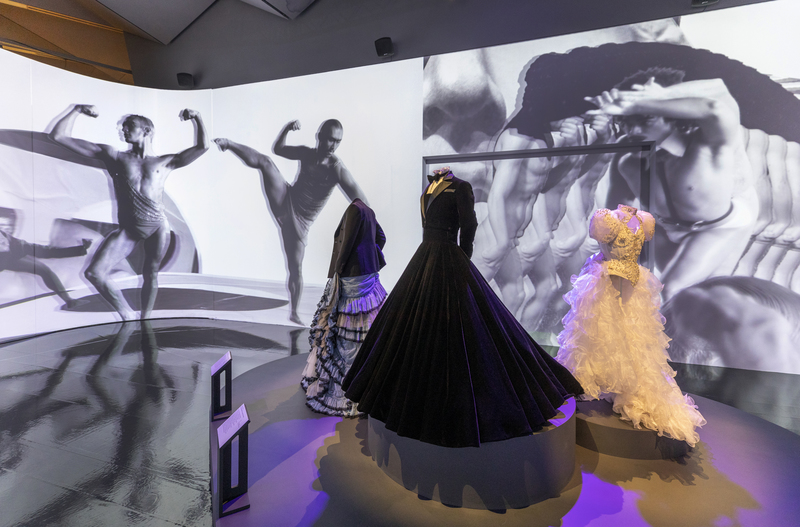 While the movements associated with marching are hard-edged and measured, the ballroom offers a platform from which to explore movements that are more liquid, gestures that flow gently, one into the other, dances that embrace the very fluidity of gender. Style often originates from encounters between music and fashion. Subcultures like the zooties, beatniks and glam rockers customised their clothes to showcase the moves of their communities. From the streets to the stage, their movements, whether measured or extreme, have played a part in the subversion and evolution of masculine dress.

As well as displaying three extraordinary gowns on invisible mounts, the finale of the exhibition brings the unfolding of binaries to life with 'Boys Don't Cry', a commissioned video by director Quentin Jones in which real bodies perform a choreography combining jazz, ballet, and vogue movements intercut with Jones’ surreal collages and graphics. The video is a direct response to the overall narrative of the show and brings the focus back to the masculine body: idealised, covered and uncovered, fashioned by clothes and movements, fragile and strong. A brave, swaggering and gracious rejection of labels. A manifesto of liberation.

Fashioning Masculinities is at the V&A Museum, London until 06 November 2022