FAFing About Fine Art in Fashion 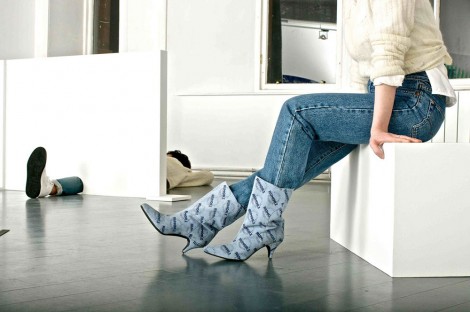 As part of the Inside the Industry series, artist Alex Pollard discussed the use of fashion references within his Art. Alex uses Fashion references as an attempt to encourage the contemplation of, and reflection on contemporary culture.

Alex explained that he found Fashion and Style to be interesting because:“They can run out of steam, lie dormant for a while, and then be revived”. Expanding on this, Alex suggested the idea of revival is relevant to young artists nowadays; they aren’t searching for something entirely new, but searching for how they can re-contextualise old forms, taking a new spin on something forgotten, he said.

Alex showed the audience images of his ‘Rumorz’ shoes; influenced by Simon Reynold’s concept of ‘Retromania’, and Stephen Sprouse’s repetitive graffiti print; Alex used the logo identity of ‘Rumorz’- a failed American 90’s girl band- and repetitively printed their logo all over a heeled pair of shoes. “‘Rumorz’ held no counter cultural credibility, I used them as a conceptual Art joke, creating self awareness within the artist, because artists differentiate themselves from hipsters and celebrity culture, but they’re not.” 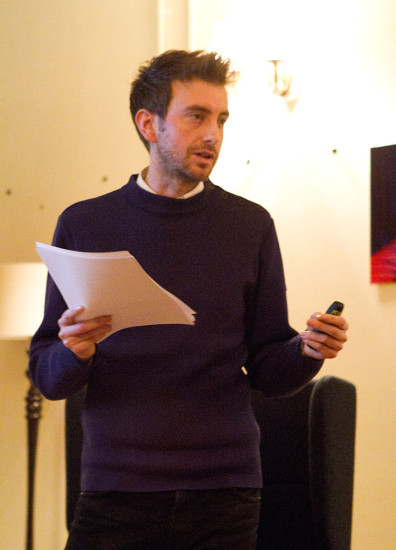 Alex suggested that ‘Retromania’ is what has led Fine Art and Fashion to collapse into each other, explaining that Fine Art, like Fashion, is the product of the fast paced culture we live in, however, Fine Art believes itself to be above Fashion:

“Fine Art arrogantly suggests it’s the only thing that can be subversive, design is commercial, and they can cross over. Art can be commercial and really trendy, like Fashion, but it believes it’s above the celebrity driven culture that fashion belongs.”

Expanding on his point, Alex gave the example of Pringle’s collaboration with the Serpentine Gallery to create the ‘195 Collection’. The ‘195 Collection’ involved artists, such as David Shrigley, modeling Pringle jumpers alongside celebrities, such as Tilda Swinton. Therefore, in this instance, both fashion and celebrity culture was brought into the Fine Art gallery context. In conclusion, Alex’s talk presented interesting thoughts on contemporary society, art and fashion, and he highlighted, clearly, the importance of re-invention and re-contextualisation within the creative industries.