Five London College of Fashion media students recently worked with ELLE for a special magazine insert that was included in the June issue. The students that worked with ELLE’s Editorial team were Ella Storey, Isabelle Thibault, Morgane Nyfeler, Ruby Bell and Daniel Amoakoh and came from MA Fashion Journalism, MA Fashion Media Practice and Criticism, and BA (Hons) Creative Direction for Fashion. They worked on a New Gen Take-Over of the Collective section of the magazine and created content which was printed in June’s edition. There was also a GIF created by ELLE to promote the special edition.

For @elleuk's June issue, we handed over The Collective to five students from the London College of Fashion (@lcflondon_) for a New-Gen takeover. The guest editors, picked from hundreds of students, let us in to their cultural world, from the old-school words that are making a comeback to why Croydon is now the place to be. Read their work in #JuneELLE, on sale now. #ELLEcollective #ELLExLCF

Students had to go head to head in a competitive pitching process where 45 students were originally shortlisted for the project. The section was then narrowed down to 12 students who met ELLE’s Editorial team and pitched ideas in a Dragons Den-style format before five students were selecting for the final project. 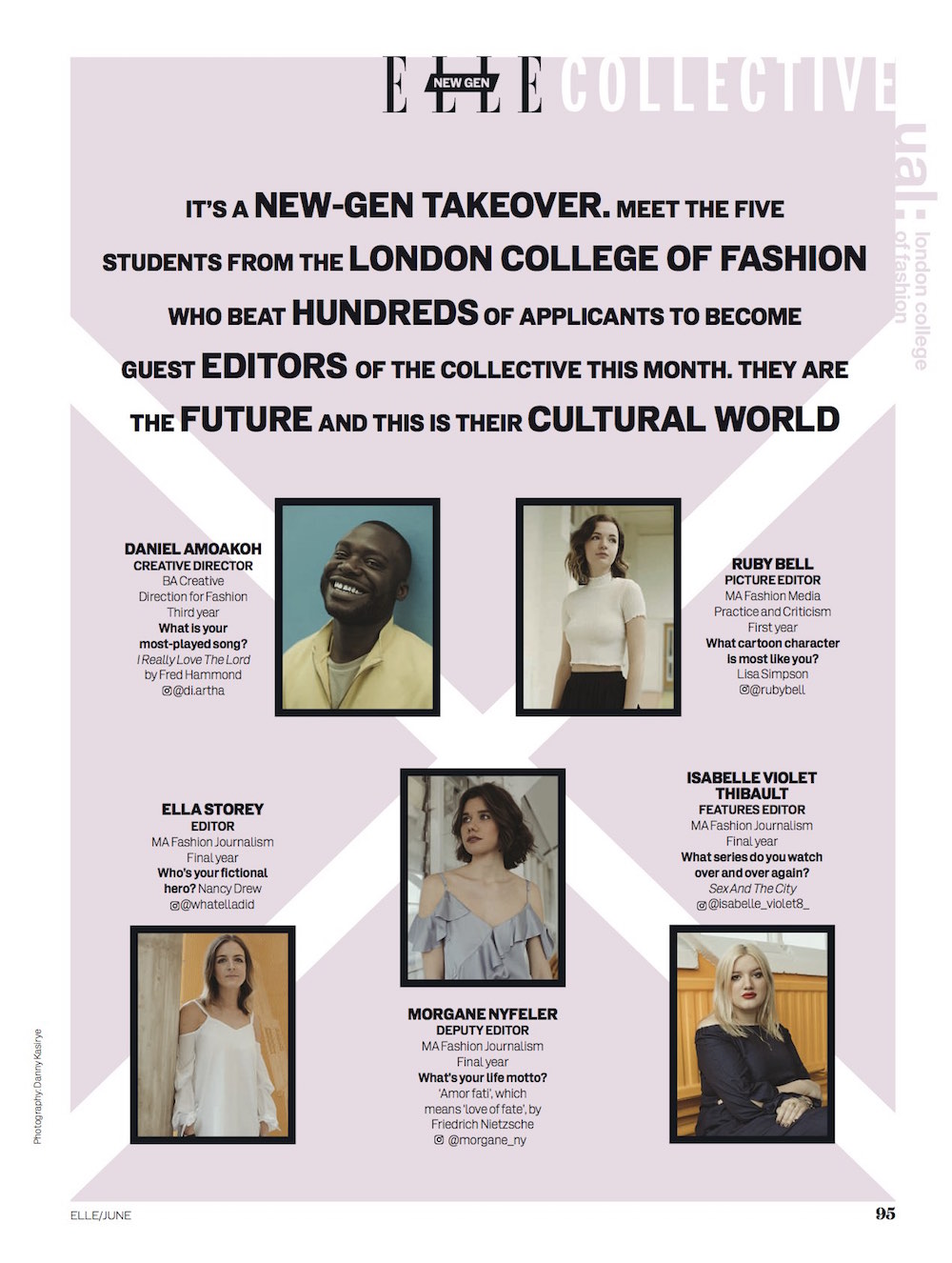 The five finalists were then invited into ELLE’s central London office just off Carnaby Street, where they worked with their editorial team for four days whilst developing ideas for the print issue. Working with one of the world’s largest fashion magazines was an incredibly insightful experience for many of the students, who took the project as a first-hand learning curve into the world of fashion media. We spoke to some of the students involved in the project.

Creative Director of the School of Media & Communications, Nilgin Yusuf, who started her career as a Fashion Writer at ELLE, spoke to us about the project. “The LCF/ ELLE Collective was a great project to work on and offered an amazing opportunity for our media students. It was great to be able to help guide and mentor students through the editorial process. The staff were incredibly supportive and encouraging of our New Gen Team and I hope there will be more opportunities to work with ELLE in the future.”

“It was a real joy to work with such a creative and talented group of students. I was impressed by their tenacity, hard work and most importantly the quality of their ideas – because good ideas are the lifeblood of good magazines,” said Lotte Jeffs, Deputy Editor, ELLE following the project. 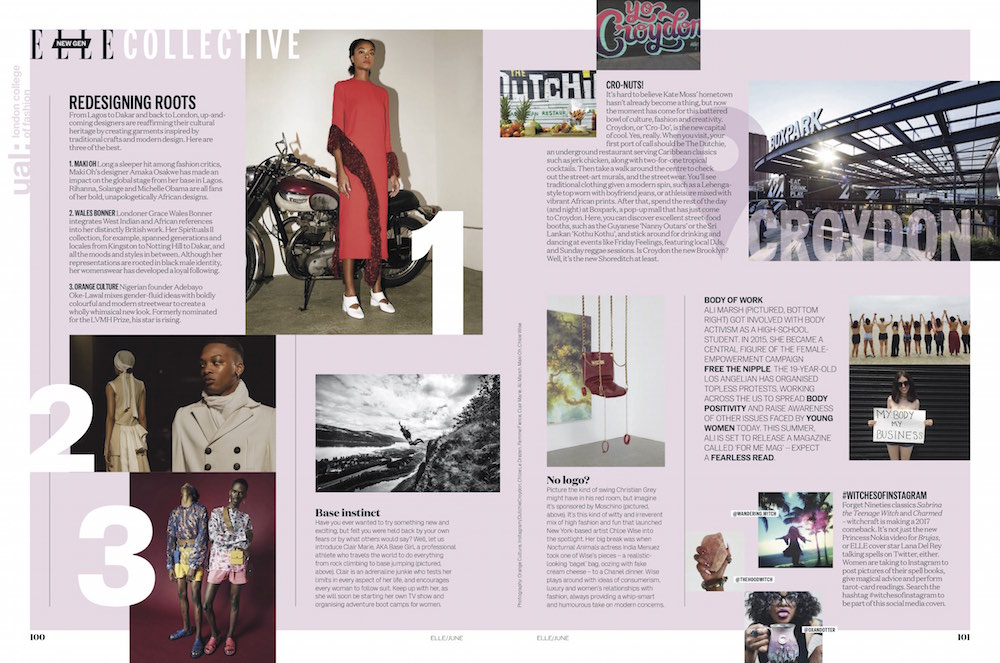 What did you create for the collaboration and how did you find working with ELLE’s editorial team?

Isabelle: I was nominated as Features Editor, and as such, I was in charge of determining what stories would fit into which categories. I was also the one that came up with the main theme of the collective, which was initially Reclamation (or the idea of reclaiming one’s body, identity, race, space etc.).  I also wrote the lexicon entries for Tea, Low-Key and Pea-cocking, as well as the article on Croydon and on artist Chloe Wise. ELLE were very helpful in ensuring we understood what was meant of us, and listened to our ideas attentively.  They treated us as equal members of their team, but also provided us with teachable moments to better prepare us for the future. For example, I learned ‘I’ll send you a draft’ is a general no-no for an editing staff, as they want to see an article complete in its conception and execution. Then work from there. A ‘draft’ has a negative connotation of incompleteness. 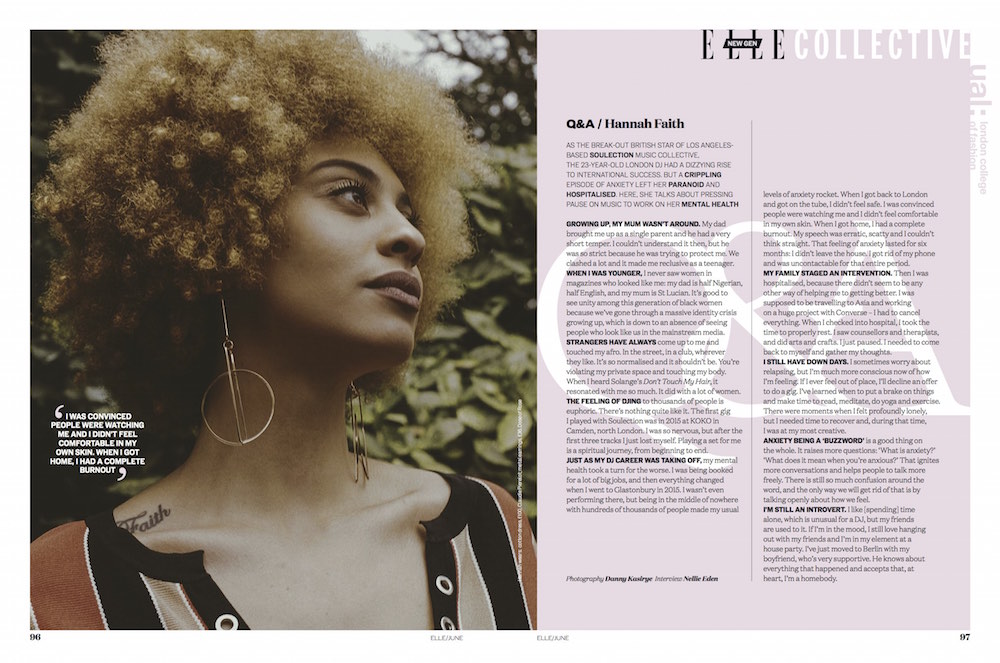 Ruby: We worked with ELLE’s amazing editorial team to curate the June 2016 Culture Collective. We brainstormed things that were on our radar and discussed angles we could take to make ideas fresh. The team from ELLE were extremely supportive and informative, it was all very professional but still friendly and fun.

Ella: For the collaboration I created the piece on Witches of Instagram, I wrote a few of the Lexicon and I was in charge of the Book Club. This was the most challenging part, but also the part I got most from because it involved getting in touch with all the fashion names for a quote for the section. I loved working with the team, it wasn’t as scary as I thought it might be and everyone was really helpful with things that we weren’t sure of.

Morgane: We created the whole idea and concept of the Culture Collective section in the June issue. We had nine pages to express who is the new generation of artists, musicians, designers, athletes, that are inspiring us, defying the norm and affirming their identities. I then personally wrote some of the texts with my fellow Journalism classmates. I found it very interesting and motivating – the whole team was a big help to us and really took us on board by giving us total freedom over the whole section of the magazine. They trusted us to come up with compelling stories and really mentored us throughout the project. 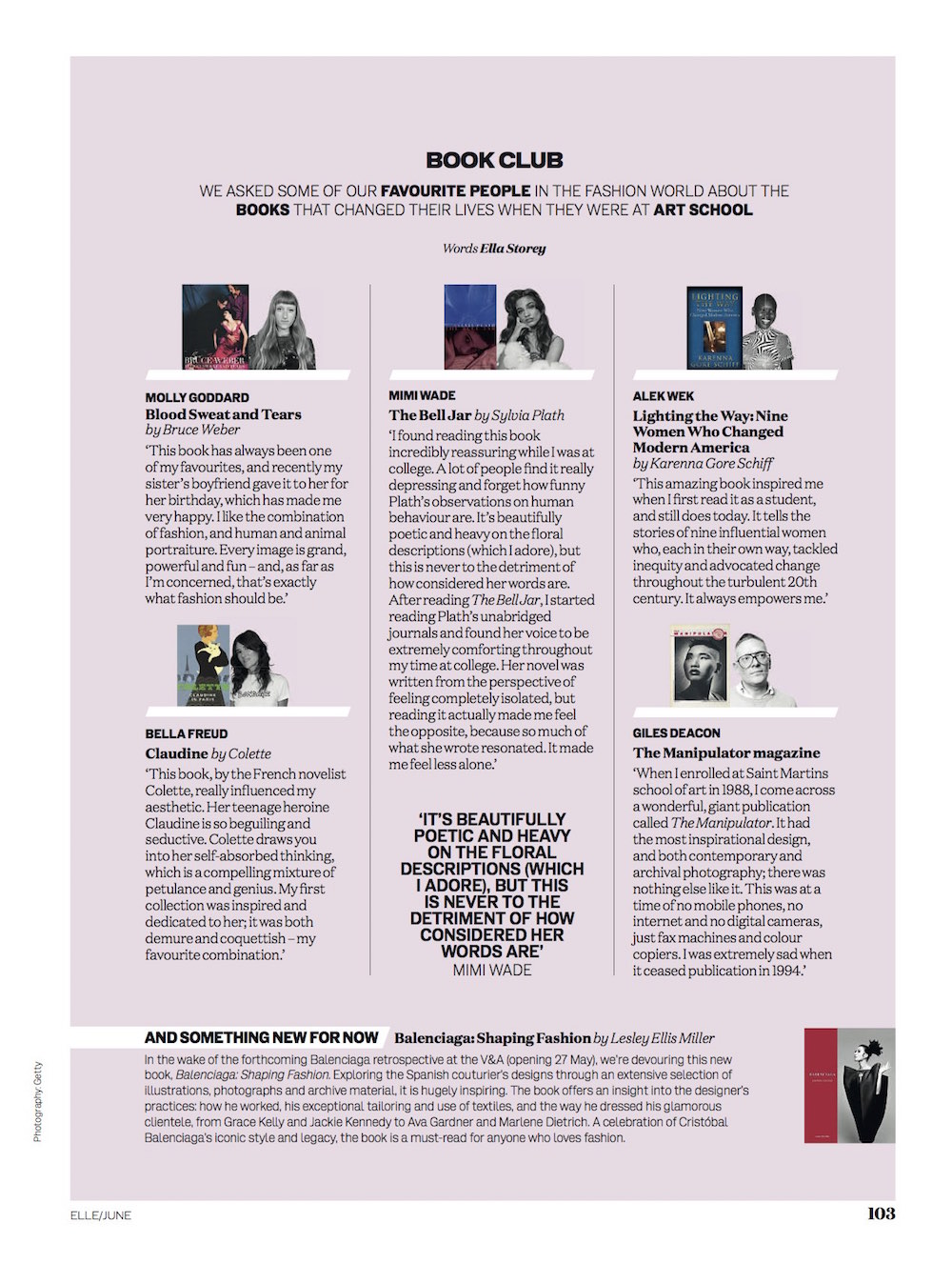 What lessons did you learn from the experience, were you surprised at how the magazine works?

Isabelle: I learned a lot of practical lessons that I will carry on to my future career, where I hope to be conducting similar work at a fashion publication. I experienced the pressures of creating a monthly magazine (deadlines galore and quick thinking!), certain industry jargon, but most importantly, it takes a village to create a magazine.  As Features Editor, working with so many moving parts in organising fashion shoots, articles, concepts, design and more would have been impossible without the help of ELLE and my fellow LCF students. I wouldn’t say I was necessarily surprised at how a magazine works, as I knew it would most likely involve deadlines and brainstorming – which it did. However, it was great to experience being there rather than simply speculating about what it must be like. As a student, this insider look at a magazine is quite rare.

Has working with ELLE changed the way you look at fashion magazines?

Ruby: Before working on this issue I had never realised how much earlier they set the content in stone before it was released. We had to be thinking in terms of what was going to be relevant and appealing for summer in the middle of frosty winter! Now I read magazines with all the forethought we had to have in mind.

Ella: Working with ELLE has definitely changed the way I look at fashion magazines, as I guess I never realised how much effort actually went into them! Each section has to be meticulously researched and takes so many people just to make sure it’s perfect. The whole process was fascinating and has only cemented my desire to work in this industry once I’ve finished my masters.

Morgane: Not really – I already worked at a magazine before so I knew a little bit about how things work. But it was interesting to see how many people work in a big magazine like ELLE that I didn’t even think of. It made me realise the long process behind an issue and all the steps from generating ideas, writing, sub-editing to the end product. It also reinforced my desire to work in a magazine after my Masters and on more exciting projects in collaboration with a great team.