On Tuesday evening, students were given the opportunity to take part in an industry talk with designer and LCF Practitioner in Residence for the Product Programme, Christopher Raeburn. 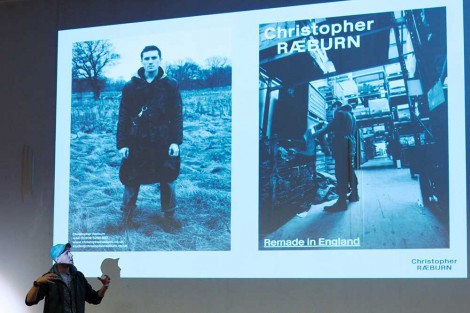 An MA graduate from the Royal College of Art specialising in womenswear, Raeburn noted back to drawing his primary inspiration from an old military sleeping bag, admiring its functionality yet juxtaposing “fun” experimental qualities – characteristics that can be seen in his “no cliché” work of today.

Raeburn, being a believer in ethical and reusable fashion, advised students on the necessity to collaborate. His primary work is created in a studio in Luton with his brother’s help. The Christopher Raeburn vision began when his famous ‘remade’ pieces were shown in the Imperial War Museum under the exhibition “Camouflage”.

Through his career, Raeburn has collaborated with Rapha, Fred Perry, Moncler and Victorinox. He emphasised the necessity to work with those with a similar creative mind – a discovery that led to Raeburn’s recognisable beautifully photographed parachute jackets in 2010, photographed by his fellow creative accomplice Sam Scott-Hunter. 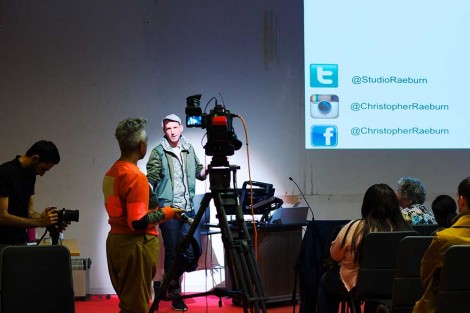 From the small studio in Luton, Raeburn revealed to students that he soon developed into a designer that stood out among the crowd with the idea of reworking a garment to create something innovative, leading to shows at London Fashion Week, Liberty of London, Barney’s and “Sustainable Futures” exhibition, further leading to the British Fashion Council’s award of Best Emerging Menswear Designer in 2011.

Christopher Raeburn, then gave students useful advice to bare in mind when embarking into creative fields. First, the importance of word of mouth and indeed, organisation. Raeburn notes that most of his opportunities he had been given were from collaboration and also, making his own luck through contacting others. Raeburn also expressed the need to get out in the industry and learn from others, advising students that this is the best way to develop. 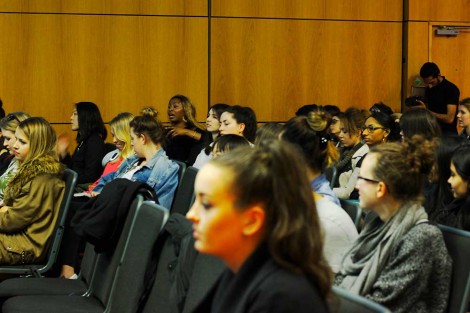 After Raeburn discussed his triumphs and what makes him such a stand-out designer, students were given the opportunity to ask the designer questions. Asked about his brand identity and what he thought made it so strong, Raeburn revealed to students that it was the notion of directing his collection to multiple market levels that made it highly sellable. Then, asked if he would compromise sustainability to become a more luxury-based brand, Raeburn expressed his want to give consumers choice, answering that he would not compromise his sustainable ethic for luxury.

Lastly, after a grilling from our creative students, Raeburn was asked if he can still sew. With a laugh, He replied “I wish I had the opportunity to sew more!”