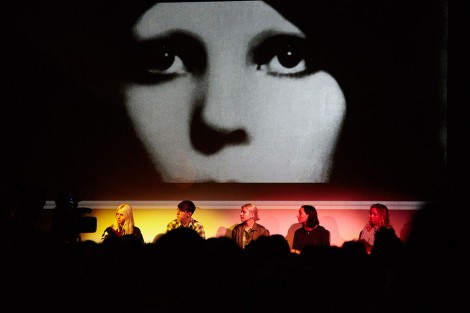 Students were in for a treat yesterday when not one, but five editors from Dazed set out to discuss image making in fashion. The panel comprised of Editor, Isabella Burley, Fashion Director and LCF alumni Robbie Spencer, Fashion Editors, Emma Alix Wyman and Elizabeth Fraser-Bell, and Video Commissioning Editor, Jennifer Byrne.

The evening began with a brief history of Dazed and how the magazine has paved the way for original fashion imagery. Founded in 1992 by Rankin and Jefferson Hack, Dazed remains to this day an independent publication. “We make our own rules rather than following how the fashion industry expects a magazine to be,” Robbie said. This independence has resulted in a reputation for strong visuals, from the celebration of women who have had mastectomies, to putting Iris Apfel on the cover at the grand age of 91.

Another key moment in the history of fashion image making was the launch of the ‘Visionaries’ series in November of last year, allowing moving image provocateurs to premiere their own original films alongside newly commissioned work. James Franco, who directed a surreal art film, launched the series.

“For me, it isn’t enough for a fashion film to exist solely as a beautiful image,” Jennifer argued. “At Dazed, we try to conceptualize ideas and push the genre forward.” As a case in point, students were shown a candid interview with David Bailey – a film that really engaged the audience at the RHS.

The latter part of the evening was dedicated to opening up a discussion with students around image making and the industry in general. Questions were posted on Twitter using #AskDazedEditors and #InsideFashion and students were presented with a rare opportunity to network with the team. ‘Can you live off what you do?’ asked one student. “It takes a long time but if you work hard you will reap the rewards,” Robbie said. “We’ve all had double, sometimes triple jobs!” Elizabeth added.