The students were briefed by Bill Amberg to echo the aesthetic of the studio and create a beautiful leather piece that has the same high craftsmanship level of the studio. The students were asked to think of something small in scale, Bill said, “Working on a smaller scale will allow you more time to develop your piece from design concept to precious item exploring the quality of finish, detailing and materials.” 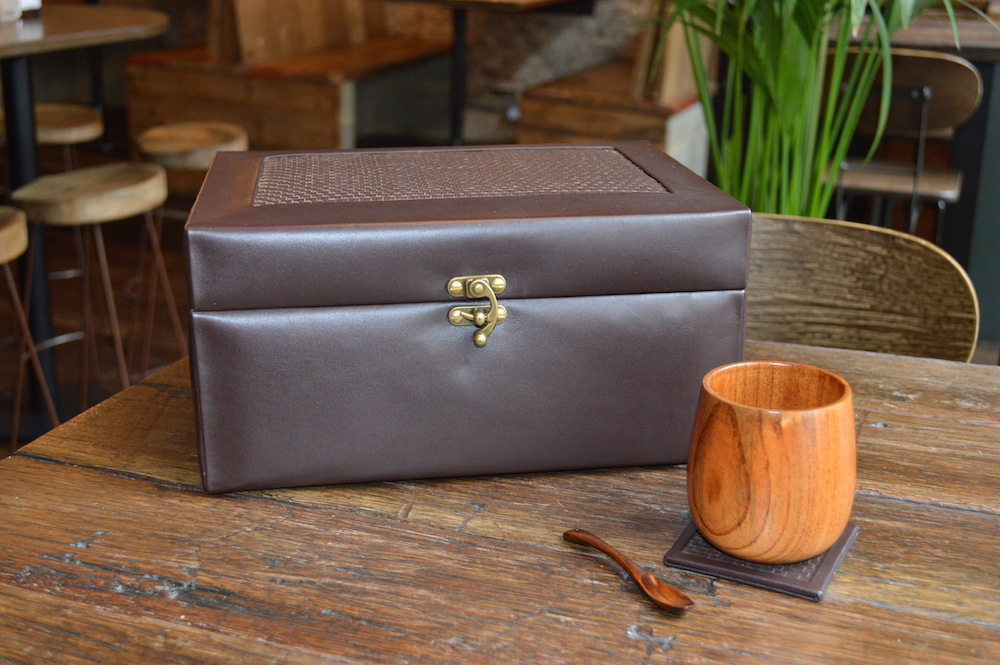 During the last three decades, Bill has worked with a variety of clients across the twin strands of his practice. Bill has designed bags for labels including Donna Karan, Romeo Gigli, Dunhill and others. In 2001, the V&A admitted the Amberg ‘Rocket’ bag into its archive of design classics. Bill has also brought leather into the interiors of iconic buildings such as Claridge’s, Selfridges, the Shard, and the Savoy, as well as consulting with renowned architects and interiors outfitters on its incorporation into prestige properties both commercial and residential.

Bill Amberg was excited to work with the students and was impressed with the standard of work produced. He told us, “I tried in this project to take the comfort zone away from the students and to push their making skills. They all rose to the challenge well. It was exciting to see how they developed after the studio visit, to understand materials and what’s possible.” We spoke to course leader Lindsey Riley after the project. She told us, “This was one of the most successful industry projects we have done as it really engaged the students. Asking for something ‘small and perfect’ was the key, as it really challenged them to up their game on craftsmanship. It really makes a difference if our industry partners participate well. Bill gave up so much of his time and really cares about the students – they wanted to do their best for him.’ Laetitia Timmermans was one of the students involved in the project. We spoke to her afterwards to hear what she thought about working with an industry pioneer. She said:

Working with Bill Amberg was the most challenging project we have ever had. It was quite clear when we visited his studio that a higher standard of work than usual was required. I saw this term as a real challenge where I had the opportunity to surpass myself. It was a way to learn to know my limits and see what I was capable of. This is how I challenged myself to make a tea box. I had never covered a box before or done anything in this kind of area. My teachers were afraid that it would not work out and were for this reason opposed to my idea of making a tea box. Even Bill said that I should go for something easier as I had never done that before. Nevertheless, I believed that I could do it and that is why I made it. I was conscious of the fact that the project could be a big fail, but it worked out completely fine. Challenge is for me the best motivation. Ye won Kim, another student involved in the project told us, “Bill Amberg’s attitude as a designer and entrepreneur is very inspiring. Although he is the head of the successful brand, he never stopped exploring new techniques to make things that are unique and beautiful. He still travels the world seeking innovation. I believe such desire and passion are the main reason for his success. I would like to follow his desire and become a successful designer just like him. It was such a priceless experience working with Bill Amberg.” Hannah Butler was another student involved in the project. She told us, “Working with Bill Amberg Studio has been an eye opener. Seeing his craftsmanship close up and the way in which they push boundaries with leather is so inspiring.”