BA (Hons) Fashion Design Technology Womenswear student Aasia D’Vaz Sterling talks to us for our Class of 2017 series. She discusses the implications of being from a diverse cultural background and the impact that had on her work, her time at LCF and what her plans for the future are. Tune into the livestream tonight at 18:30 GMT to see Aasia’s collection on the catwalk. I was born and raised in West London, into a very multicultural background and always loved the fact that my family covered such a huge part of the world. I was always inspired by this, and my heritage and the fact that even though I came from this melting pot, my family were always dressed in very ‘British’ style. From an early age I always wanted to dress and create things to make me stand out and showcase my personality. My mum often tells me of a story of when I was only five that she found me cutting up a sheet to create a halloween costume, without being able to sew.

[Whilst at college] I was a member of the CAPS scheme, which was immensely helpful in my application to LCF. I did a week long short course in Jewellery design. I loved the teaching style and environment, plus the tutors were extremely helpful in giving me insight into what a design course at LCF would be like. The students who were helping to run the course were really honest and encouraging towards me. Doing this week long scheme was very informative, and ended up being one of the contributing factors in making LCF the number one spot where I wanted to study for my degree.

Talk us through your final project/collection/research/piece…

My final collection consists of four looks which are vibrant, big and heavily layered. The inner structures of the looks are built up with layers of tuille to give them large silhouettes, but still maintain lightness and movement. Each garment tells a part of the story, and can be worn on its own but when worn with other garments it amplifies and compliments my entire aesthetic.

The collection is called ‘So, you’re coming to Britain?’ which was initially inspired by an integration guide which was circulated in the 1950s, aimed at West Indians who were immigrating here at the time. This led me to think about the experiences of my own family who immigrated here from India and Jamaica. After talking to family members, what I found most interesting was that even after living in Britain for over 60 years, our families collective ‘Britishness’ is still disputed. 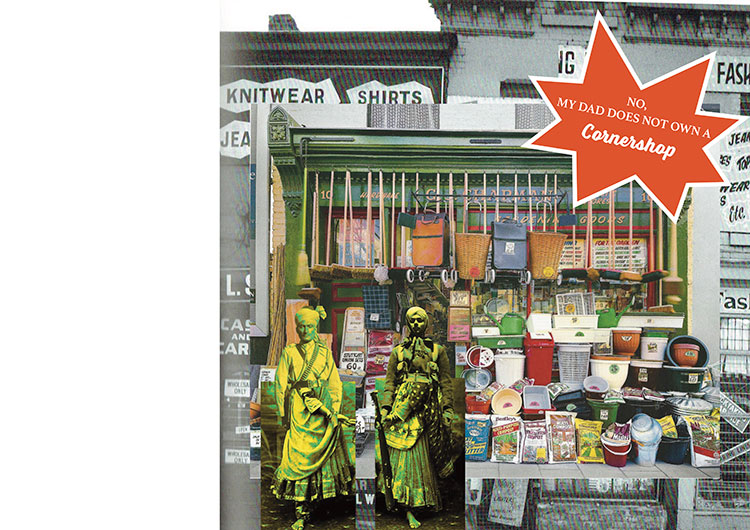 I wanted the collection to be a ode to multi-cultural families like mine and all they have done for Britain. In the case of my family my great-grandparents were enlisted from India to fight for Britain in World War II, and then settled down in England working for services such as British Transport and the health services. This is why you will see military and work wear references mixed with late 19th century silhouettes from India and the Caribbean.

I also wanted to capture the dreams and hopes of coming to Britain and how one might imagine Britain and its famous countryside, which is why I took inspiration from 50s British railway posters which presented the most incredible landscapes in an attempt to entice tourists. I collaborated with Hannah Zahran a Fashion Textiles: Print student – I asked her to reimagine landscapes in this style using vibrant colours inspired by India to highlight the concepts I’m exploring even further.

I built channels into all of my looks, to allow sticks to pass through so that they could be used as a handle to carry the garments. I was inspired by images of individuals in the Caribbean and India using sticks to carry heavy loads in the late 19th century, so I thought I would reinterpret what it would look if my ancestors from the late 19th century in these countries would have carried their belongings on their journey here. Keeping in theme with the late 19th century garment references, I looked into how petticoats of that era were constructed to give volume to clothes, I incorporated these techniques to support the large silhouettes for all of the looks in my collection 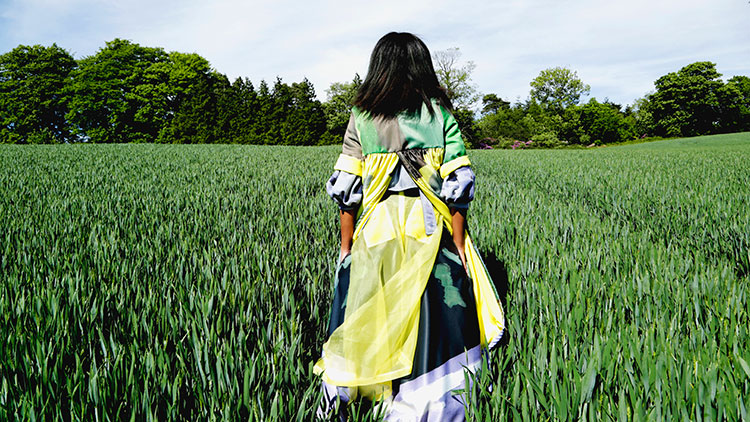 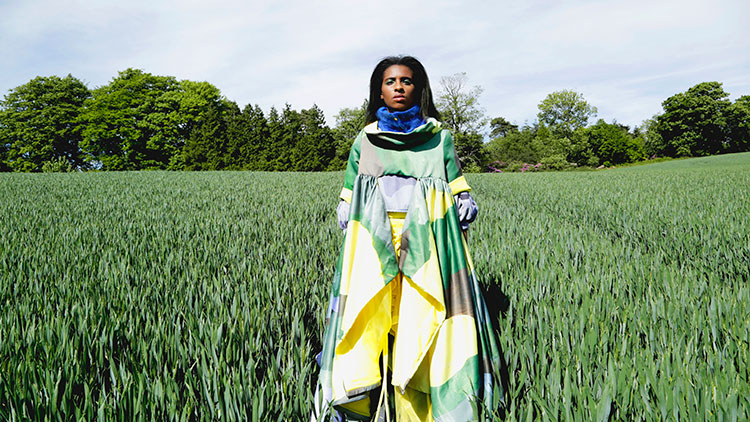 Not yet but I am going to be showing at the BA17 catwalk show, which we be an amazing platform for my work. I did an internship at Sadie Williams and whilst there I manufactured some of her jewellery collection for Spring/Summer 2017. Some of the items I created were featured in Vogue Runway & Dazed, it was such a great feeling and has spurred me on to develop myself and continue to grow awareness of my fashion aesthetic.

I had my first internship at Phoebe English as we were required to take on a placement in the industry for a term as part of the course. I them took it upon myself to find a placement during my 2016 summer where I worked for Sadie Williams. Both were such valuable experiences and helped me grow and gain skills which are applicable to the industry. I found these internships by researching and finding designers who’s aesthetics really resonated with me and applied to them by sending a CV, cover letter and digital portfolio consisting of the most exciting work I had done throughout my time at LCF.

Every tutor has something unique yet relevant to offer. I have been inspired along my LCF journey by a few people who have taught me the challenges of being a designer, yet given me the focus and feedback to enable me to grow and push myself to be the best that I can be. Do you have a muse?

There is no one person that I design for, my designs are a reaction to the characters I create within my concepts. I am really influenced by film, I recently created a fashion film, the aesthetic of which was aimed to create Mr Bean in a Spike Jonze Film. I am really inspired by the intersectional theme which has resonated with me and impacted me throughout my life.

I would love to further my education by taking an MA course, then open my own brand. My three years at LCF have taught me so many skills that are applicable to the industry. They have equipped me to be able to adjust to many different job roles, not just being a designer.

Have you heard that LCF is moving to east London? What do you think about the move?

Yes I have, I think it will be great to have all the LCF resources in one building. This will bring communication between courses much closer together.

What do you think Brexit means for the fashion industry?

I think it means a period of uncertainty but the I think the British fashion industry and the talent that comes out of British universities are strong. Hopefully we can persevere.