Continuing our celebrations, #LCFClassOf2020 BA Fashion Jewellery graduate, Sofia Pereira Azevedo, wins the Swarvoski Innovator 2020 award thanks to her final collection 'Fabulae'. We caught up with her to find out all about winning the award and producing a final collection during one of the most unprecedented academic years we have known.

"It’s important to experiment as much as you can; lose (or find) yourself within the many libraries at UAL; sign into as many extracurricular activities and workshops as you find suitable, even if they are not directly related to your course, network and collaborate with fellow students and tutors!"

Tell us, how did this come about? Did you apply?

Swarovski Innovator 2020, came about as a collaborative project between Swarovski and LCF’s Fashion Jewellery Year 3 Students.

Preparing three different designs in parallel with the later stages of one’s course might seem a bit daunting (and it was), but, fortunately, the competition was set in a way that made it possible for its entrants to adapt and consider part of their Final Major Project’s collection – which was composed of five pieces – into their submission.

Starting out, I didn’t think that my collection would be adequate, for it was heavily reliant on the integration of biodegradable elements into and through itself. However, upon further exploration and a partial rethinking of its conceptual component, I quickly noticed that it and Swarovski could work in tandem, for sustainable and ethical design practices are no longer a thing of sole practitioners, but also a theme amongst long-standing industry names that wish to reinvent themselves in accordance with the knowledge available today. 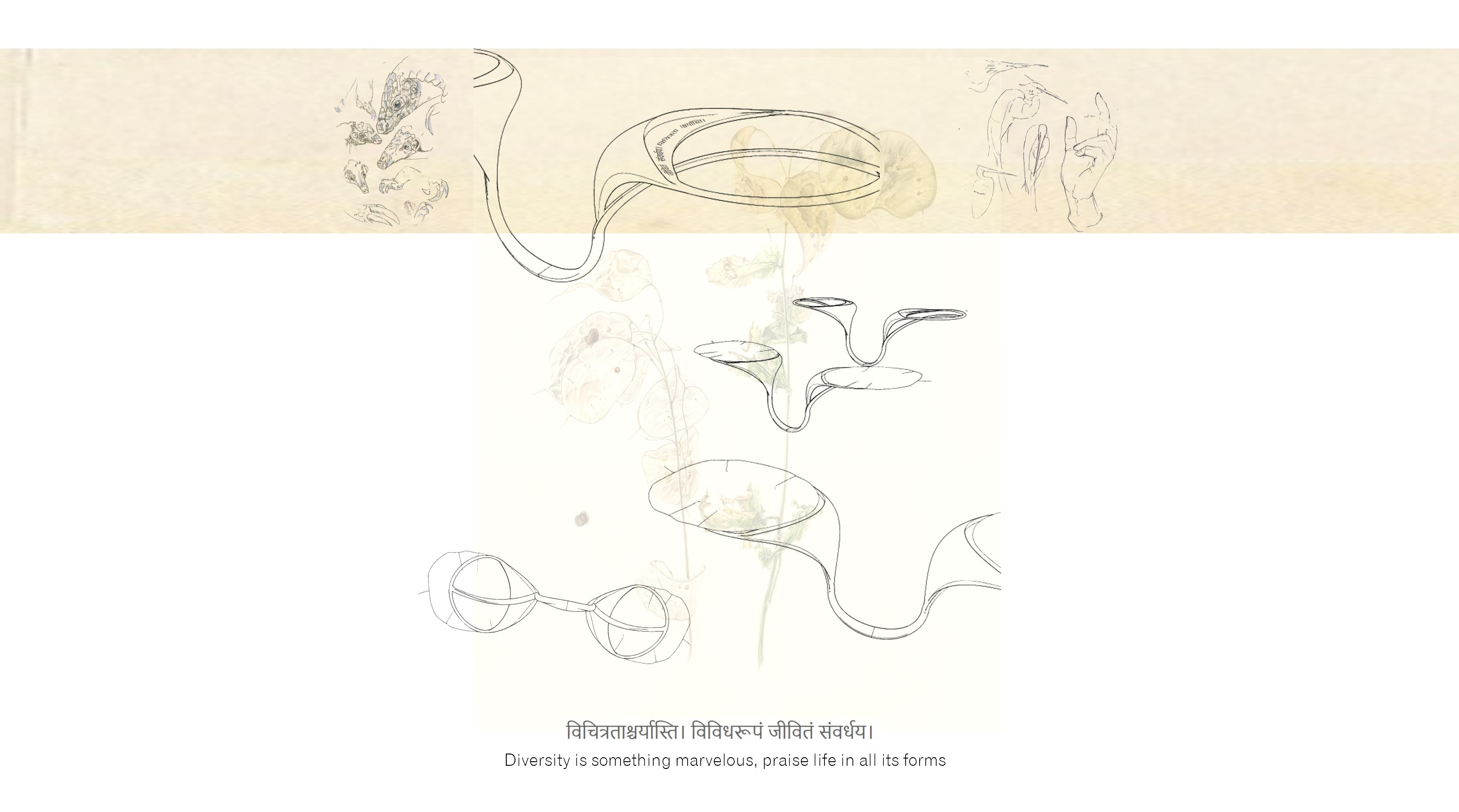 Describe the process – what were you required to do?

Students were asked to decide which materials, processes, and messages (both implicit and explicit) would be used for and within their designs, all whilst minding the interactions between the latter and its wearers/users and setting them against a backdrop of innovation and longevity. In broader terms, we were required to not only mind the visual impact of our pieces, but to actually think about innovative and “environmentally positive” ways to both produce and showcase them.

My final collection, 'Fabulae', through the piece that was submitted as part of this competition (“Fabulae - Asia”), invites one to rethink the aforementioned concept of longevity through the portrayal of a narrative that unveils the beauty behind bio-ephemerality, be it literally–through the application of biomaterials within each of its pieces–or figuratively.

As a whole, this proposal tries to convey the idea of an armour that begins to latch onto one’s own body, as if it were gracefully, yet urgently trying to preserve itself and its wearer above all things. Over time, and upon the withering of their respective natural elements, the three rings would start to reveal a message, one that would alert the wearer not to let nature become but a memory of something precious.

The winged element (or the “sails”) of each ring, which are comprised by the lunaria annua seeds and the Swarovski crystals standing atop them, are glued onto the aforementioned structure with a compostable glue fabricated from a corn-based polymer – one that, upon degradation, aims to release the crystals out into the open as if they were seeds. 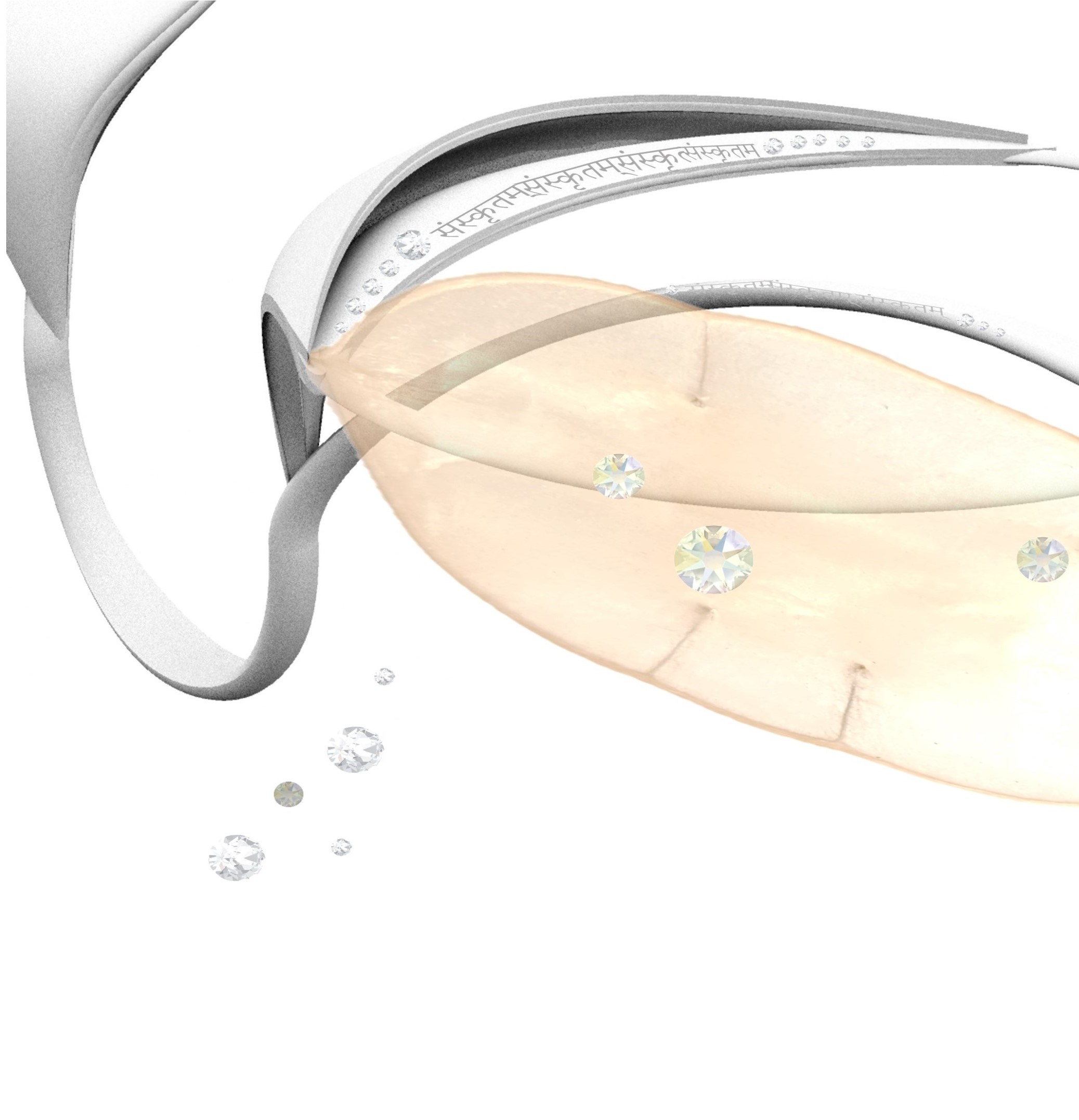 Aside from winning amazing awards, what have you been up to during your final year of study? Has this uncertain time impacted your work in any way?

This final year was a true roller-coaster. Before the Covid-19 crisis stormed through Europe, I had begun shifting my methodologies more and more toward a more sustainable light. I started to explore the validity of bioplastics and biomaterials as a substitute for animal-based materials and the unethical processes that are linked to their harvesting. Because not only applying and developing such materials, but also disseminating this message would require knowledge and tools that I did not possess entirely at the time, I started researching, foraging and eventually (literally) cultivating my own share; taking part in more and more software-training classes, to increase my visual and digital representation skills – which eventually led me into joining an LCF-sponsored “Fashion and AI” course; reading more into the subjects and then, as the crescendo became livelier than ever, the pandemic hit, putting almost everything on temporary halt.

The times that followed, where students were forced to learn and work remotely were surely trying; to not have your tutors, colleagues and supporting staff beside you – physically – during your learning periods, nor the full access to the Uni’s resources and facilities was a sharp blow to most people’s productivity as they struggled to adapt. Additionally, in my case, to not be able to devise and build a project at the workshops, but instead, to prepare it almost solely through 3D modelling software such as Rhino, troubleshooting or 3D printing/casting.

Nonetheless, particularly due to this attrition, my attention once again shifted toward the embrace of another one of LCF’s valuable platforms, the Digital Learning Lab, from where I was able to enrol in 3D and AR focused classes–which contributed greatly to the conception of my final project.

Because it had always been a dream to combine technology with my traditional background and sustainable design practices, as soon as this struggle started to produce visible results, I was able to find a newfound sense of confidence on my own resourcefulness and, just as importantly, a lasting sense independence.

How do you feel your time at LCF has prepared you for industry?

In general, LCF has played a role in preparing me for the next stages of my professional career, but there are four aspects that – in my view – deserve to be highlighted:

The first of those aspects is the Y2 internship programme. This 4-month tenure abroad allowed me to experience life and culture in one of the World’s greatest art capitals (Barcelona), an experience that contributed greatly toward the establishment of professional bonds with talented practitioners, the expansion of my technical knowledge and, to a great effect, also allowed me to get a clearer vision regarding the matters about which I could spend the next few years working on.

The second of those aspects would be LCF’s keenness in ensuring that its students are able to attain a certain degree of proficiency (and sometimes, its respective diplomas) on and about field-related software, such as, for example, through the enrolment in Adobe intensive courses.

Third, the infrastructures and the fantastic staff members and super helpful technicians that populate them, starting from the Jewellery workshops at Mare St., which are really well furnished, to the very own existence of the excellent Digital Learning Lab, a powerful and underutilized space that allows students to learn and discover new technologies and methodologies.

Lastly, the tutors, Bernadette Deddens and Husam El Odeh, who, in addition to having us students develop an outward, tolerant and investigative approach to the work of others–which allowed for a greater conquest of knowledge and references–, also did their utmost in teaching us to value our own projects and ideals above all else, all the while instilling a proactive mentality that allowed for quick-witted, project-defining decisions.

Any words of advice for those looking to join the course?

As stereotypical as this might sound or feel, I can’t fail to mention that in all academic paths – but perhaps, more so throughout those that rely almost entirely on their own creativity – it is paramount to be yourself.

One other piece of advice that I could share with you would be for students to –as early as possible– adopt a future-minded approach: to establish short, mid and long-term goals, make them known and follow through with them, developing positive habits.

Also, curiosity is a central part of your career as a creative, and while it may come naturally at first, it’s relevant to note that curiosity too feeds on experiences, the more and the vaster, the merrier. It’s important to experiment as much as you can; lose (or find) yourself within the many libraries at UAL; sign into as many extracurricular activities and workshops as you find suitable, even if they are not directly related to your course or its current Modus (be proactive in your research); network and collaborate with fellow students and tutors (from the same or from a different course); look into the things that will enable you to spend more time around the college and your fields of interest; and lastly, while it is necessary to build your independence for the sake of your career, do not hesitate in asking for help or advice, the Uni is equipped to deal with a myriad of needs–a great part of them unknown to the average student–and, if able, will gladly support its students.