Professor Amy de la Haye, Rootstein Hopkins Chair of Dress History and Curatorship and lecturer on the MA Fashion Curation, has been our ‘Curator-at-Large’ this week in New York. Amy is a Co-Director of the Centre for Fashion Curation. 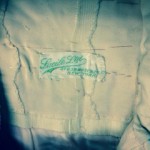 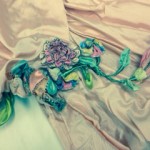 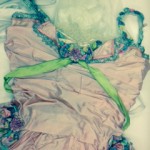 ‘Today I flew into Manhattan and went to the Museum of the City of New York, where I had an appointment with Costume Curator Phyllis Magidson to see garments by Lucile.  She showed me a group of 4 evening dresses and a night dress dating from Spring/Summer 1921. They had been ordered from Lucile’s New York salon by Elma Lapp, who wore them no more than once or twice.

Her fiancé was killed during the war and it appears that this season she re-entered social life. However, she never married and preserved these exquisite garments for some 60 years before donating them to the museum.

They form a fascinating group that evidence one woman’s selection and are a tribute to the craft skills of Lucile’s couture workshops. Here is a detail of one of the dresses – a robe de style – and a close-up of the corsage. I was completely thrilled to see them.”