Alumni brand Squid London pops up at House of Fraser 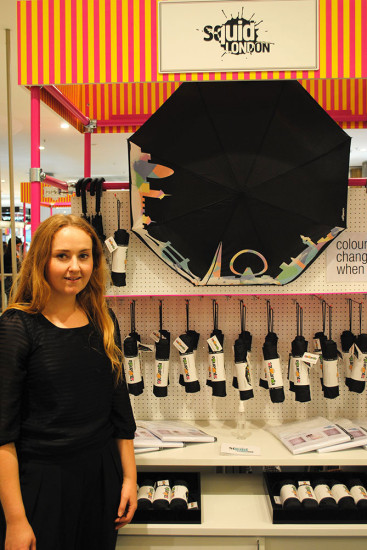 ‘PopatHoF’ is the name of the initiative which saw the girls’ brand appear in a pop-up stall in House of Fraser. The stall was part of a competition to showcase emerging British brands using concession stands at the department store’s flagship for 13 days, and they were one of only 10 brands to win the opportunity. The stall was sponsored by Taittinger Champagne, who offered a free glass of bubbles with every purchase.

Emma-Jane and Viviane both graduated from LCF in 2008, the same year they launched their brand, which is now available in 18 countries through 130 different stockists. They also design bespoke items for galleries and museums such as the Tate and the British Museum.

The duo are also releasing a children’s brand of ‘rainwear’ in playful patterns for kids to enjoy. Their new SquidKids children’s range will appear in Hamley’s toy store in London and will include wellies, bags and umbrellas in three different styles, for both boys and girls. The designs include dinosaurs, sharks, pandas, polka-dots and buses.