A group of BA (Hons) Costume Design for Performance students have been working on a project called Alpha Females, in honour of 100 years of women’s suffrage. Alpha Females is a performance featuring a series of characters from third century Palmyrene Queen Zenobia to Simone de Beauvoir. The students have designed costumes and worked with actors on monologues, that will be performed at our free Open Doors: Vote 100 event at Here East on 22 July. 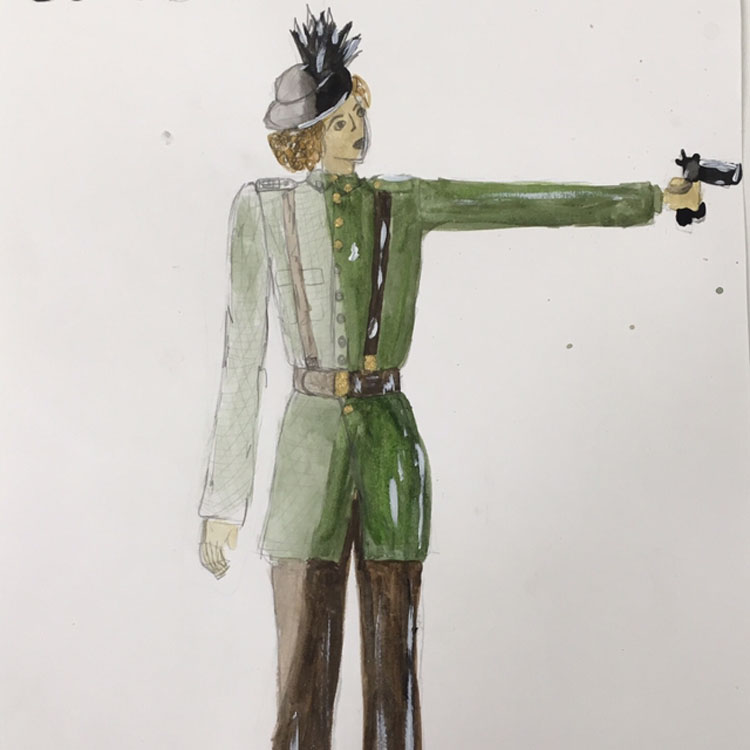 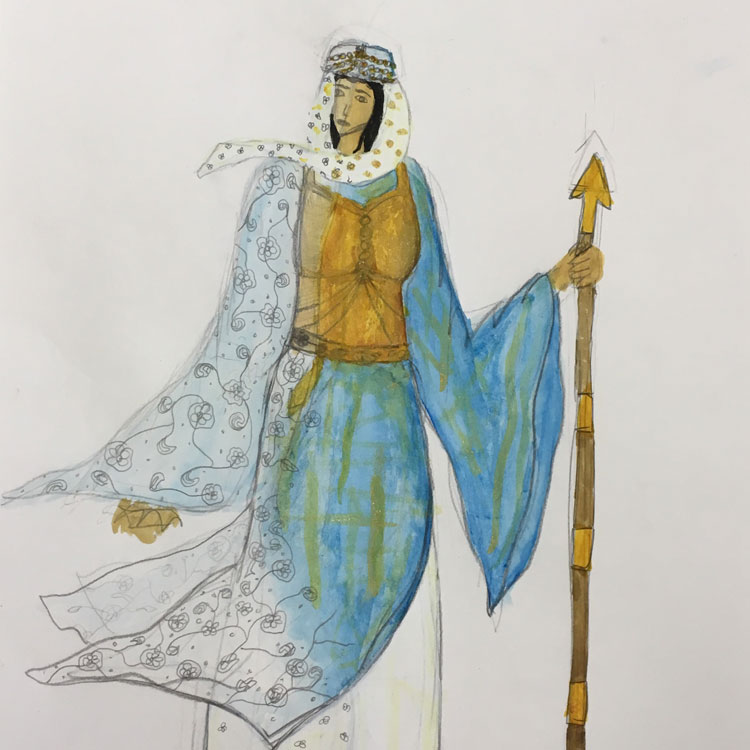 The students told us that they thought about how to make the suffragette theme more contemporary by looking at characters through different times  of history and from different cultures and researching how they relate to modern life. We spoke to 2nd years Vihaa Dwivedi, Vivien Wilson, Katharina Botelho and Grace Meyer, and 1st years Morwenna Garrett-Bannister and Martina Bizoviti, to find out the importance of their characters and why they felt it was important to represent them to mark LCF’s Year of the Woman.

I’m working on the character of Seymour Fleming who lived in England in the late 18th Century. She was abused by her husband and became a prostitute – her husband would watch her with other men and use her for his own pleasure. She decided to get a divorce which wasn’t possible at the time because she was technically the property of her husband, despite the fact that she had all the fortune. She went to court and humiliated him by telling everyone that her husband made her sleep with 23 men, without feeling ashamed. Through that she got her freedom to marry the man she was in love with, who then decided he didn’t want to be with her because of her past so in the end she decided to be on her own. Years later when she married someone else she didn’t take his name, he took hers. For Seymour’s costume I am looking at actual images of her – because she was a noblewoman there are actual portraits of her. The most famous picture of her shows her in an 18th Century men’s military uniform – it was a man’s garment made to fit a woman. I’m trying to remake this costume because it’s the most recognisable costume for her character. 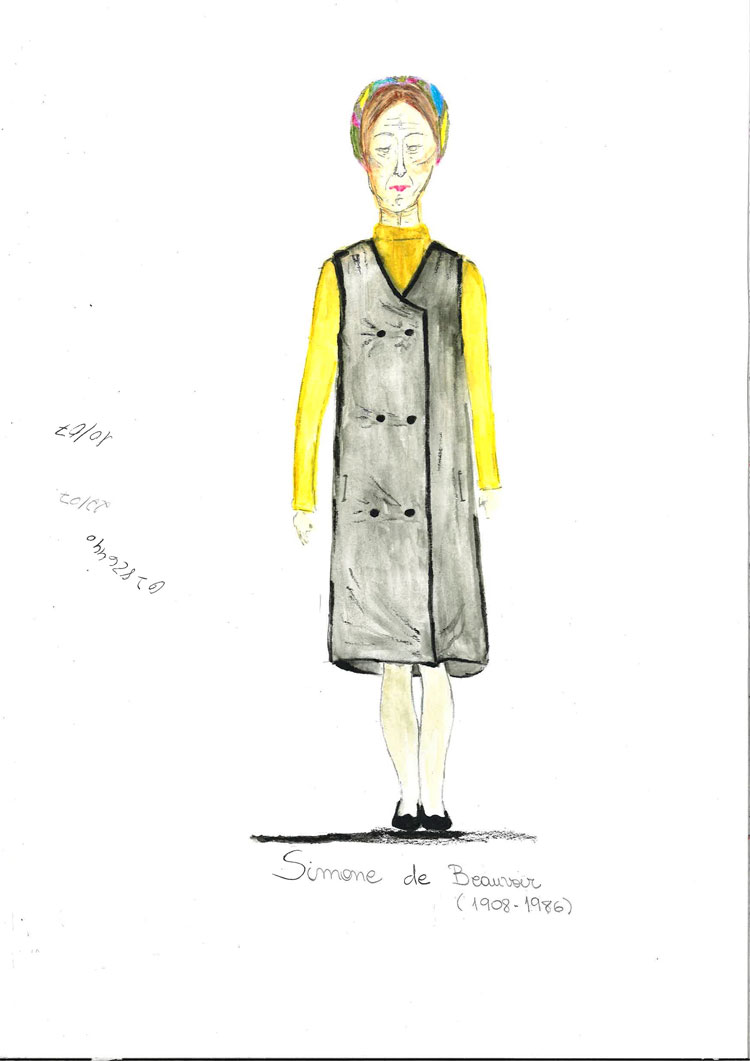 I’m working on Simone De Beauvoir’s costume, looking into historical references of how she used to dress, what she used to do. I’ve been reading interviews and I picked up on the things I thought would define her as a character costume wise, and the styles she would always go for. It was more of a historical analysis than a creative process. I have adapted the costume to what I thought could be a middle point between what she was and how I interpreted it, and how it would go with the whole performance. There’s so much to explore with Simone De Beauvoir – she’s such a strong personality that people are familiar with. I’m sourcing a scarf and shirt but I’m making a dress.

I’m making two costumes – one of them is for the character Zenobia. She was a third century Palmyrene queen. When her husband died in battle she took over and delcared herself the queen and empress and expanded the empire. She took over a lot of countries that at the time were ruled by Rome. Zenobia’s costume was more difficult to design because there aren’t many images of her. In some images she has been depicted by Roman artists as a blonde white woman, but actually she was from Palmyra so I’ve tried to make her look more like a Syrian woman and how she would look today. I drew elements of different paintings that have been done of her and also given her things like a hijab, a traditional Syrian hat combining elements of modern clothing with the costume she would have had. Zenobia is a very early example of a woman being a leader and a woman being a warrior – she led her troops to battle and fought alongside them

My other character is Constance Markowitz who was known as the rebel countess. She was an Irish suffragette who took part in the Easter uprising in Ireland. She was arrested and all of her comrades were sentenced to death but they wouldn’t kill her because she was a woman. She has some great quotes like “I wish they had the decency to shoot me” – she wanted to be treated like the men. She was a rich woman but devoted a lot of her life to the poor. She would wear a male officer’s uniform with a slightly eccentric countess hat. She was also the first woman to be elected as an MP in the Sinn Fein party. 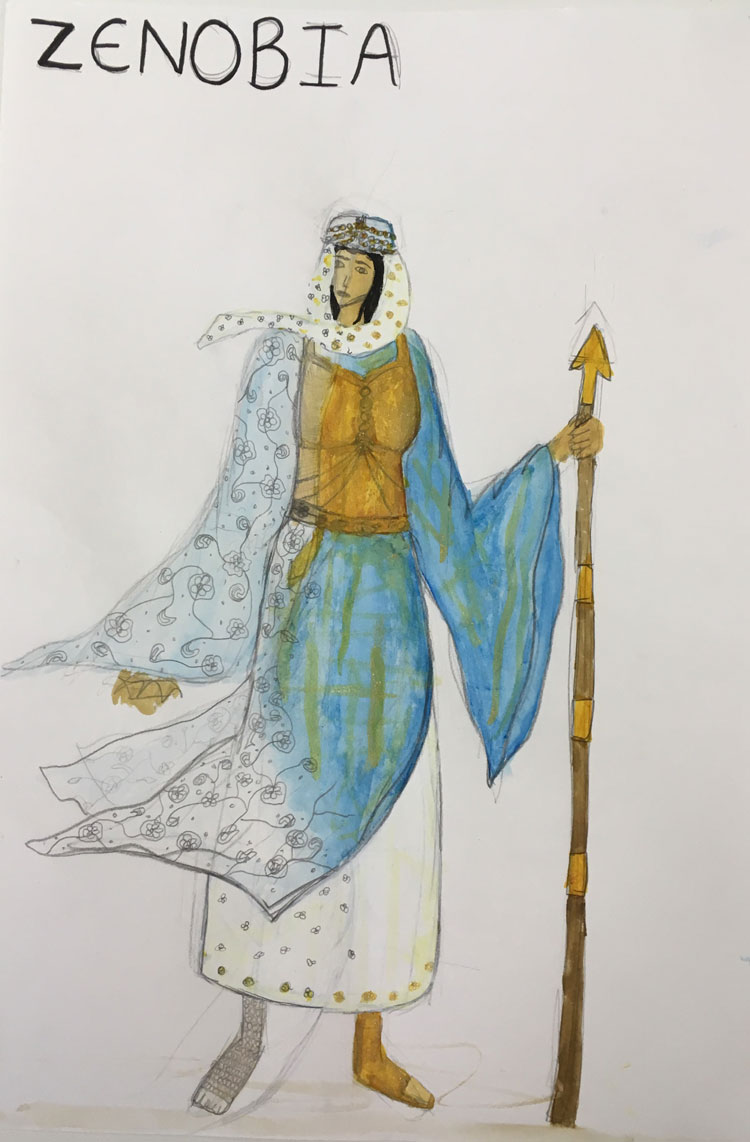 I’m making a costume for the scientist Marie Curie – it’s an all black costume because she used to wear a lot of black. It’s a fairly modern gown, with an inner and outer bodice and a skirt. It will mostly be in cotton – satin cotton for the top and for the skirt an heavier cotton so it falls nicely. I think it’s really important to represent Marie Curie because even today women are struggling to make their name in science – it’s shocking and it’s a conversation that needs to happen. All the characters we have chose are because they relate to our current situation in one way or another. These conversations can only happen through these characters – and Marie Curie, the first woman to win a Nobel Prize is the woman to talk about this.