Super Sharp opens at Fashion Space Gallery on 1st February, and is the first in a series of exhibitions and events called RTRN II JUNGLE – exploring style, sound and rave culture in the 90s. Super Sharp is curated by Tory Turk and Chase & Status’ DJ and producer Saul Milton. It explores the role of luxury Italian designer brands in the underground music scenes of Jungle and UK Garage. Versace, Moschino, Iceberg and D&G are examples of labels that ruled the dance floor in the nineties. Moschino, in particular, became synonymous with the look associated with that era.

The exhibition traces the emergence of the Jungle and UK Garage music scenes and the shift in club culture and style it initiated. Jungle – a form of electronic dance music derived from old school hardcore and heavily influenced by Jamaican sound-system culture – was born out of the Bristol and London underground rave scenes in the early 1990s. Developed through pirate radio it directed its audience to licenced raves in and around London. This club venue environment inspired a new raving style – integrating the colourful look of rave culture with urban combat gear and flashy designer labels. 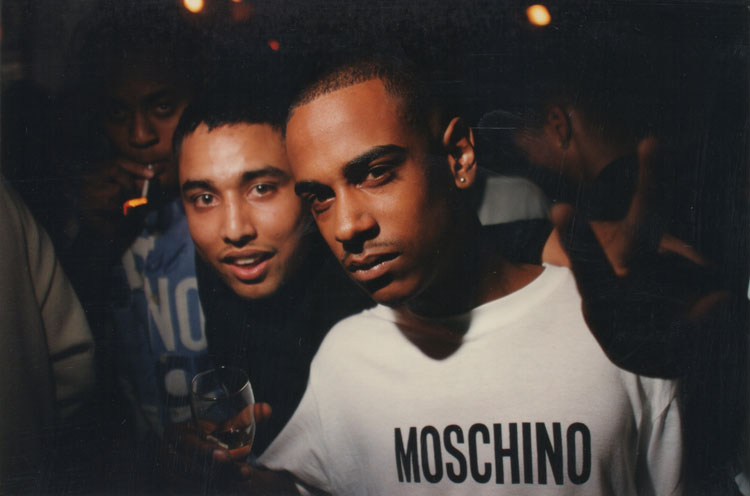 UK Garage emerged in the mid-90s in South London with hype around the genre reaching its height between 1998-2000. With its roots in the original Garage sound which began in 1980s New York it often incorporated soulful R&B-inflected vocals combined with a distinctive 4×4 percussion rhythm and heavy sub-bass. It brought with it stricter door policies, refusing entry to clubbers wearing caps and trainers. The sound attracted more females, which in turn changed the attitudes within the club. Dancing and posing became even more about flaunting affluence; it was more restricted, classier and sexier.

The exhibition draws from an extensive Moschino archive amassed by Saul himself, and also forms the core of RTRN II JUNGLE. The title Super Sharp embodies this attitude to dressing, visible in black culture before the emergence of these iconic UK subcultures. It also draws reference from the 1996 DJ Zinc track of the same title.

We’ve made a Spotify playlist to get us in the mood – hope you guys enjoy it too.