Last week, the Clothworkers Hall in the City of London hosted an evening celebrating footwear design, at the third annual Cordwainers National Student Footwear Awards. Students, designers and industry professionals, came together at the high profile event to meet the next generation of outstanding design talent and to celebrate Britain’s foremost position in footwear design education. Two LCF students came away with the first and second prizes, and a third was commended.

For the third year running,students from LCF, De Montfort University and the University of Northampton were invited to take part in a competition, all working to the same brief. Each university chose five submissions, and sent them to the Worshipful Company of Cordwainers, where each one was judged anonymously by a panel. The award ceremony included an exhibition of the work of the 15 student finalists. 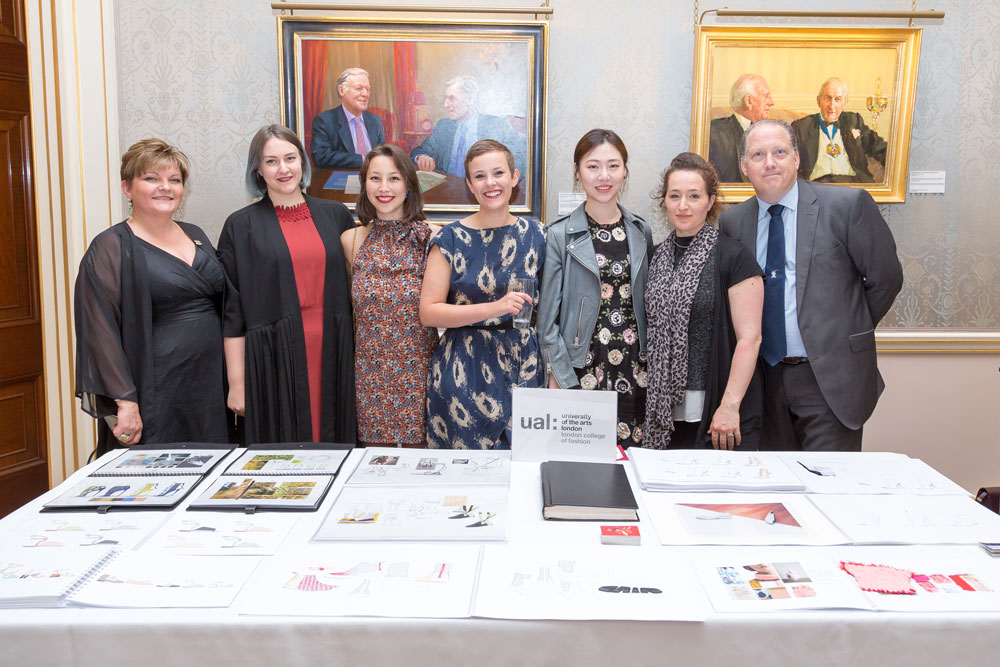 “When they announced the awards it felt incredibly surreal – I was overwhelmed by the support I felt from everyone at the event, and in the days since. I am, of course, very happy to be the award recipient and grateful to be connected in this way to the Worshipful Company of Cordwainers.”

The collection she submitted featured in the LCFBA16 Catwalk Show, and was based on themes of maritime sport, surfing and sailing. Caroline collaborated with BA (Hons) Fashion Design Technology Womenswear student Zaiga Brutane and BA (Hons) Bespoke Tailoring student Tsun Cheung for the collection. The footwear was created using re-purposed technical materials used in the maritime industry, to create a range of unisex collection for active urban enthusiasts. 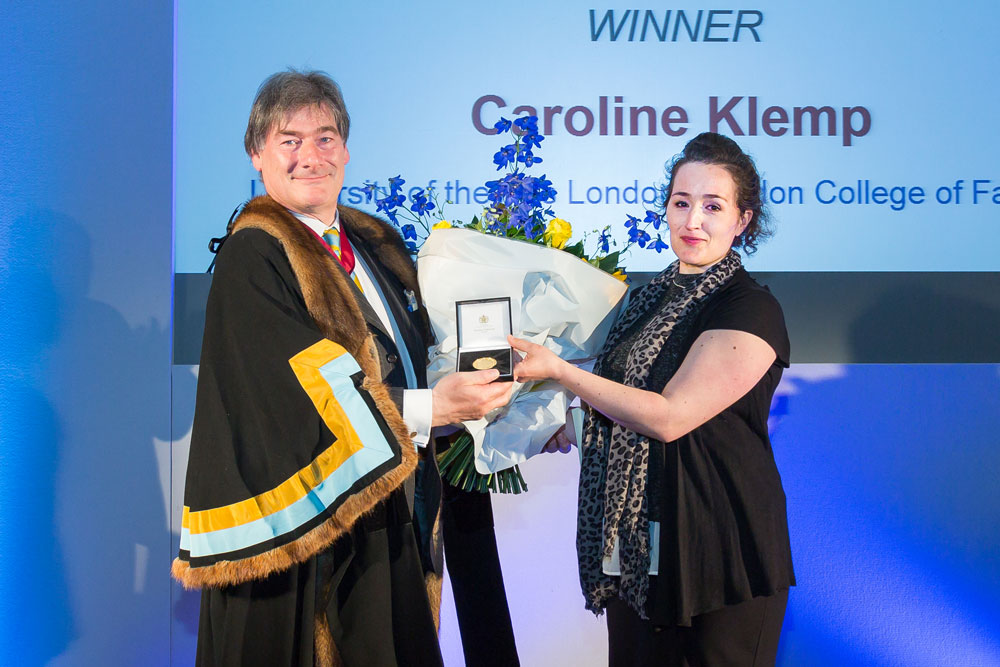 In second place was Chantal Lavendar, and Da Young Im was commended for her submission. Da told us:

“I am extremely honoured to be a recipient of this meaningful awards. It is an immense privilege to represent LCF. In the future I hope to create my own footwear brand, but for now, I want to gain valuable work experience in various industries.”

Chair of the judging panel Katie Greenyer announced the winners and commented on the quality of work and the encouragement it brings to see such a level of talent coming through the universities involved, and thanked the Worshipful Company of Cordwainers for the competition. 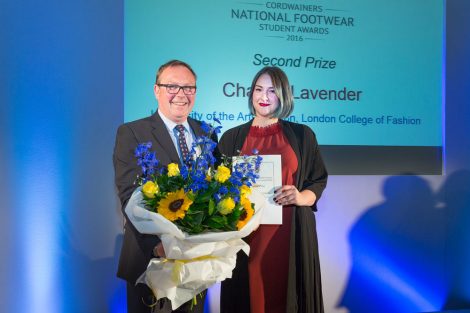 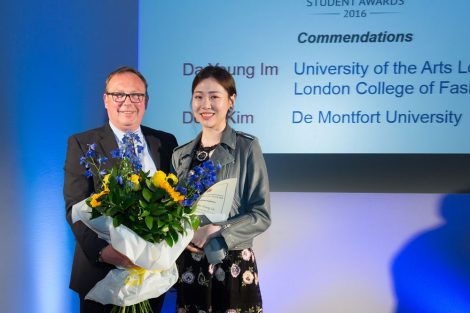 Cordwainers at LCF alumna Sophia Webster was key note speaker at the event. She gave a passionate and inspiring speech encouraging the next generation of designers, commending all the students for their achievement in being an awards finalist and thanking the Cordwainers for their valuable support of footwear design students. 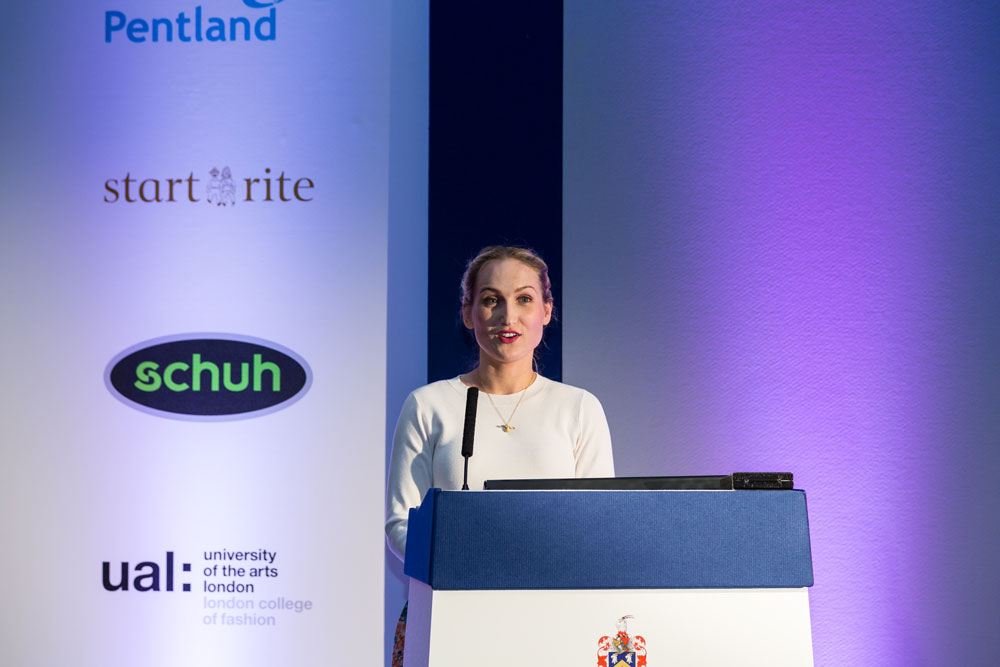 “It is a great responsibility to speak to the next generation.  Advice I would give  …. is to believe and have determination, visualise your success. Second is always go above and beyond what is expected from you, be prepared to work hard and build a dream team, as you need a team of people to support you.”

“We’re very very excited to be able to announce our student Caroline Klemp as the winner of the top prize in the National Cordwainers student of the year awards, generously hosted by the Worshipful Company of Cordwainers. Not only Caroline but our other winners Chantal Lavender (2nd prize) and Da Young Im (highly commended) – they epitomise the hard working creative spirit of our students within Cordwainers at LCF, and we couldn’t be more proud!

We are of course immensely proud of all our students who took part by submitting work and also those who shared the evening with us. It was a fantastic night for the whole team including students, technicians and academic staff. Every year the competition standard gets better and better and the other Universities also had very strong submissions. We congratulate all of them and look forward to next year already.”

The Master of the Worshipful Company of Cordwainers, John Rubinstein also expressed his thanks to everyone who supported the awards:

“This event is all about footwear students. Britain leads the world in footwear design education and has produced some world-leading talent over the years.”