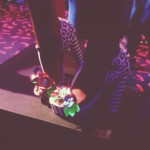 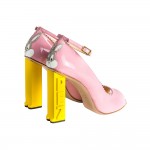 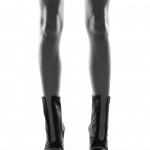 London Fashion Week this month saw an influx of LCF Cordwainers alumni, with the graduates virtually taking over ‘shoes’ in the designer showrooms at Somerset House. The prestigious SS15 event saw LCF graduates from all different stages of their careers showcasing their collections. And with such spectacularly innovative and beautiful work, we at LCF News couldn’t help but shout about our lovely alumni. Here is the low down of who they are and what they are doing to change the game in shoe design…

Sophia recreated a jungle rave for her vibrant SS15 collection. The collection, entitled ‘Jungle is Massive’ included electric camouflage prints, sandals complete with floral motifs and daring bondage boots – not for the faint of heart. As said by Vogue, ‘no matter how eye-popping the decor… Webster’s bright and bold signature shoes remained the focal point, drawing muted shrills from fashionable onlookers’.

Havva is a family owned company, whose knowledge has seeped through three generations and been passed down to Havva Mustafa, now named Head Designer, following in the footsteps of her father and tutor on LCF’s Cordwainers Short Course, Nafi Mustafa.

Since being named Fashion Fringe Accessories winner in 2011 for her innovative 3D printed heels, Kerrie has worked alongside Bruno Frisoni at Roger Vivier in Paris.

Her collection ‘Natural Nouveau’, inspired by the elements and aesthetics taken from nature, was on display in the Selfridges Shoe Gallery in 2013.

Joanne was spotted and mentored by Jimmy Choo and has since collaborated with numerous designers such as Matthew Williamson and Dune, along the way picking up many awards including the prestigious Vogue Talents Award.

The architectural heels reference Joanne’s love of cubism and the addition of eclectic materials and bold colours ensure a result that is fascinatingly unique. Joanne searches the world for the finest, most interesting materials and finishes everything by hand in England.

Camilla makes showstopping, fun and frivolous shoes which flatter the foot. She has done work experience with the likes of Nicholas Kirkwood and LCF Alumna Sophie Webster, Donna Karan, Paul Andrew, Charlotte Olympia and Topshop. She was also shortlisted for the NEWGEN award.

Showing for the first time this year, Julia’s collection focuses on femininity and asymmetry, redefining the familiar perception of shoes.

She received the Manolo Blahnik Award in 2013. Julia founded her label at the beginning of 2014.